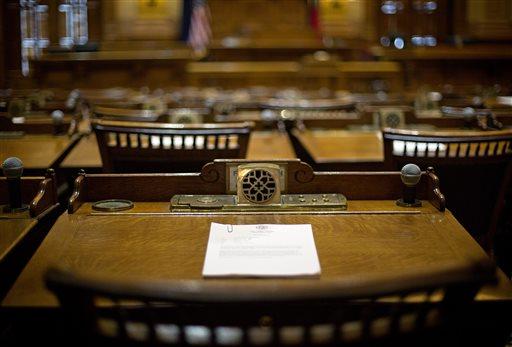 ATLANTA — The practice of pawning one’s car title to make ends meet could get a bit more restrictive in Georgia under a bipartisan bill filed in the 2020 legislative session.

Using a person’s vehicle as collateral, auto-title loans provide small sums of money to cash-strapped borrowers quickly, without the need for a credit check. The loans, which can carry high interest rates into the triple digits, can cost borrowers their vehicles plus the balance of any unpaid debt in the event of default.

For proponents, the loans offer a way for people to keep financially afloat in times of trouble. These borrowers may not qualify for other kinds of loans offered by lending institutions like banks or credit unions, according to title lenders. High interest rates help offset the risk of lending to less financially stable borrowers, they say.

But critics argue the practice contributes to trapping the state’s most vulnerable populations in a cycle of debt, particularly for low-income and black communities. Consumer advocacy groups have long called for more legal guardrails on title loans to curb so-called “predatory lending” techniques.

Senate Bill 329 would cap interest rates at 36% annually for auto-title loans in Georgia, closer to how other small-sum loans are regulated. It would also establish stricter terms for refinancing and set limits on how much money a lender could collect upon default.

The bill’s sponsor, Sen. Randy Robertson, said it was inspired by a constituent from Columbus whose elderly father pawned the title to his car to pay his utility bills, then fell into a hole from the increasing monthly payments of the loan’s 166% interest rate.

Robertson, R-Cataula, said he modeled the legislation on interest-rate caps of 37% that the U.S. Department of Defense placed on loans approved for military members in 2006.

“I don’t want to kill business and I certainly don’t want to shut down a lane that a segment of the population may need to get by,” Robertson said. “What I want to do is bring that lane in line with the closest thing to it.”

Sen. Chuck Hufstetler, the Republican chairman of the Senate Finance Committee, is a co-sponsor of the bill along with three Democratic colleagues: Sens. Zahra Karinshak, Ed Harbison and Sheikh Rahman.

Small consumer loans are regulated to varying degrees in Georgia depending on the loan amount and type, but none can carry interests rates higher than about 60% annually under the state’s usury cap.

That does not cover loans involving car titles, which state law considers as pawned items. Pawnshop transactions are subject to interest rates of 25% per month for the first 90 days, then 12.5% per month for every 30 days thereafter.

Consumer protection advocates view pawn designation as a loophole that has prompted auto-title lending to swell in Georgia. The nonprofit group Georgia Watch estimated that 755 title lending companies were open in Georgia in 2018 and cumulatively collected nearly $200 million in interest.

Georgia Watch’s executive director, Liz Coyle, said those companies often prey on struggling borrowers desperate for cash and willing to reup on high-interest loans for years to keep from losing their cars.

“Pawning your car title is not the same as pawning your grandfather’s watch,” Coyle said. “It’s a debt trap.”

Robert Reich, president and CEO of Atlanta-based lending company Community Loans of America, disagreed with that characterization. In a statement, he said the high interest rates reflect the riskiness of these loans and argued they should be regulated by local county and city rules, not by the state.

“These are high-risk financial transactions and we look forward to working with the author to educate further about our industry in hopes of allowing the non-banked customers options that would not otherwise exist,” Reich said.

A better approach, Reich said, would be to go with regulations proposed in legislation brought in 2017 by Rep. Brett Harrell, R-Snellville, which would limit loan terms but largely keep the same interest rates. Georgia Watch has called that measure not tough enough. It stalled in the state House.

For his part, Robertson framed his bill as a means to rein in small loans that could help ease the “generational poverty” that can spur people to commit crimes.

Robertson, a retired major with the Muscogee County Sheriff’s Office, said many Georgians who wind up in jail were raised in families that had to tap “quick-cash type businesses” to make ends meet.

“This empties jails and prisons,” Robertson said of his bill. “We have to stop the behavior that’s causing them to be incarcerated, and I think that being dependent on predatory lending is part of that behavior.”