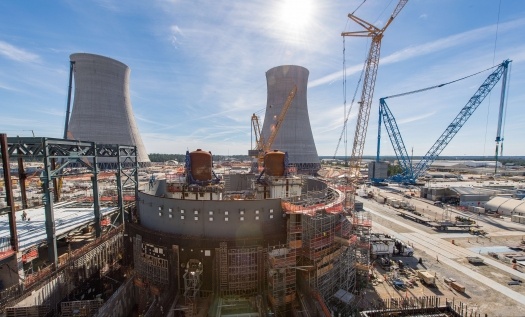 The Trump administration on Friday doubled down on its backing of Georgia’s troubled Plant Vogtle expansion project, approving billions of dollars in new federal loan guarantees.

U.S. Energy Secretary Rick Perry and other state and federal officials came to the site south of Augusta to offer support for the only nuclear power project still underway in the nation.

Though the project is already billions of dollars over budget and years behind schedule, Perry announced finalization of another $3.7 billion in financing guarantees that had been conditionally committed earlier.

That’s on top of $8.3 billion in earlier loan guarantees made during the Obama administration, for a total of $12 billion in guarantees backed by taxpayers.

“Look around you. This is the real ‘New Green Deal,’” said Perry, referencing the Green New Deal, a Democrat-led initiative to cut fossil fuels use, battle climate change and, in the process, boost jobs. “That’s what we are looking at here, folks.

This is America. This is what we can do together.”

Georgia Gov. Brian Kemp, who attended the event, thanked the Trump administration and officials from the project’s lead owner, Georgia Power and its parent Southern Company.

In addition to safety concerns about Plant Vogtle, critics have assailed the project’s future hit to customers’ wallets in Georgia.

Already, typical residential customers of Georgia Power have paid hundreds of dollars over recent years to cover financing costs and company profits on the project.

The state’s own experts have said the total cost of energy from Vogtle’s new units is expected to be higher than those of some other energy sources.

While many nuclear plants are still operating around the nation, Vogtle is the only remaining U.S. commercial nuclear project to be started in the last 30 years. A project that had been underway in South Carolina using the same new reactor design was canceled in recent years as costs soared. Other utilities pulled proposals for new nuclear plants, as the price for other energy, particularly natural gas, became more attractive.

Vogtle’s troubles have grown over the years, despite early assurances from Georgia Power and Southern Company officials that the companies could handle the project’s many risks.

Georgia regulators in February postponed a scheduled round of public hearings and updates on Vogtle until August.

State regulators have put Georgia Power customers on the hook for “what has been clear for years is project mismanagement,” with no cap on costs, said Georgia Watch executive director Liz Coyle. And the moves by the federal government extend risk to taxpayers throughout the nation if the project fails, she said.

Sara Barczak, of the Southern Alliance for Clean Energy, said in an emailed statement that “rewarding failure by doling out billionsmore dollars in corporate welfare at taxpayers’ expense for the Vogtle nuclear project in Georgia is not only unfair but it is idiotic given all of the red warning flags.”

Nuclear plants don’t emit carbon that has been connected to climate change, but some environmental groups have warned about other risks, including those from leftover radioactive waste.

Asked by reporters about whether there is some point at which Vogtle’s rising costs will no longer be a wise investment for federal backing from the Trump administration, Perry said “that is one of those questions that is out into the theoretical side.”

Unit 3, the first of two new nuclear reactors, was supposed to be finished and operating almost exactly three years ago. Instead, it is now projected to be in service in November 2021.

The second reactor, Unit 4, is slated to go in service a  year later, in November 2022.

Tom Fanning, chief executive of Southern Company, indicated the new units will have low operating costs. As for the federal guarantees, he said, “these are loans that will be repaid. So all this get returned to the government.”

The federal loan guarantees also will reduce financing costs that are passed on to customers, according to the company.

“We’ve had our challenges,”

Fanning said, “but we’ve been able to fight through those challenges to make the incredible success that we see today.”

Georgia’s energy picture has shifted dramatically in recent years. Some coal plants, once the dominant source of power generation in the state, have been scaled back or closed. Natural gas has boomed as an energy source. Solar energy has increased, with falling prices and plans by Georgia Power to further expand that portion of its portfolio. But Vogtle’s expansion remains Georgia’s largest construction project.

The challenges of nuclear expansion at Vogtle were barely referenced at Friday’s event.

Georgia Power chief executive Paul Bowers told the crowd of workers, dignitaries and media that Kemp has been consistent in his support for Vogtle’s two new reactor units. “Whenever we speak about Vogtle 3 and 4, his words to me are, ‘Get this thing built.’”

Billions of dollars over budget and years behind schedule, the expansion of Plant Vogtle is the only U.S. commercial nuclear project underway.

Typical residential customers of Georgia Power have paid hundreds of dollars over recent years toward the project.

Cost overruns are likely to be rolled into monthly electric bills eventually.

And critics of federal loan guarantees say taxpayers all over the nation could end on the hook if the project fails.

However, company officials say the guarantees will reduce costs for consumers.