Battle heats up on ‘surprise billing’ in Georgia hospitals

HomeHealth Access ProgramBattle heats up on ‘surprise billing’ in...

Battle heats up on ‘surprise billing’ in Georgia hospitals 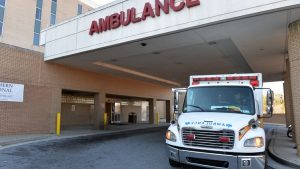 Clayton County ambulances line up in the driveway outside the emergency room of the Southern Regional Medical Center in Riverdale, Friday, January 30, 2015. KENT D. JOHNSON/ KDJOHNSON@AJC.COM

By Ariel Hart – The Atlanta Journal-Constitution

When Matthew Keadey and his wife went to have their baby at Northside Hospital, they had done their research. The facility was in their insurance network, and so was their doctor. Everything went fine.

Until the extra bills came.

It turns out that two bit players in the birth — the hospital’s pathologist, who evaluates afterbirth, and its pediatrician on duty — were independent contractors and outside its insurance network. They had every right to bill Keadey for hundreds more dollars, out of the blue.

“And I’m pretty savvy on the issue,” said Keadey, who is a doctor himself and now an advocate on the billing problem.

Keadey’s experience shows how the system works throughout Georgia and also much of the U.S.

Nationwide, more than one in five insured patients were hit by a surprise bill when they went to the emergency room, even though the hospital was in their network, Yale University researchers reported last year.

The problem got so bad that it has a name: “surprise billing,” and Georgia legislators are now proposing laws to deal with it.

But a battle between insurance companies and doctors over the issue has left a good fix for patients out of reach thus far.

Out-of-network doctors say they are forced to bill patients because insurers don’t pay them enough for their services. Insurance companies argue doctors are the ones cashing in by so-called surprise billing.

Everyone agrees — insurers and doctors alike — that patients would be better served if the two sides could strike an acceptable deal to include those doctors in the networks. But that would mean agreeing on a list of adequate fees to pay the doctors, and that’s where things break down.

To patients holding the bill, it doesn’t matter why. If a doctor is out of network, they either pay, or find themselves in debt.

‘They can’t afford that’

For many patients, paying those extra bills is difficult if not impossible. Nearly half of Americans could not come up with $400 for an emergency room visit without selling something or borrowing money, according to the Federal Reserve.

“If we don’t solve the problem, it’s going to get worse. It’s not going to get better,” Sen. Renee Unterman, a Buford Republican and chairwoman of the Health and Human Services Committee, said at a legislative breakfast with consumer advocates last month.

She spoke of people getting emergency care or young couples getting started and then having babies in neonatal care and finding themselves with surprise bills.

“They can’t afford that,” Unterman said.

In Georgia, Rep. Richard Smith, R-Columbus, chairman of the House Insurance Committee, has proposed House Bill 71; in the Senate, Unterman is pushing Senate Bill 8, which is similar to a proposal she made last year. Unterman’s committee is expected to meet Tuesday afternoon, and she said she expects to propose new ideas then.

Both bills would mandate better transparency by providers in posting which networks they belong to, and telling patients which doctors will participate in the patient’s care. But they would still leave much of the research up to patients. And both would still leave patients paying out-of-pocket costs like deductibles and co-pays.

Legislation addressing the surprise billing issue is far from a done deal. Although the problem is not new for Georgia’s insured patients, there has been no fix year after year.

A bill to fix it last year, Senate Bill 382, died in committee. Instead, the issue went to a study committee.

Unterman met with lobbyists, she said, but in vain.

“Unfortunately there’s not going to be a compromise because these industries are not going to budge,” Unterman said. “I knew if I’d have another study committee, you’d get a bunch of people in the room pointing fingers at each other.”

She said she decided to introduce the bill she thought best and try to make it work.

The surprise billing problem is an old one.

Keadey’s experience was 11 years ago. An emergency room doctor who directs Emory University Hospital’s emergency department, he is helping lead the charge for a more doctor-friendly (and, he says, patient-friendly) solution.

“We want to take the patient out of the middle,” Keadey said. “I see it’s bad for patients.”

“We need to protect the consumer and get the consumer out of the middle,” said Graham Thompson, executive director of the Georgia Association of Health Plans.

The two sides have watched warily as other states have begun adopting solutions and mandating fee levels, some friendly to one side, some to the other.

Thompson said patients’ ability to see insured providers with no billing surprises is “an important consumer protection.” He said emergency room doctors can get a fair deal if they will negotiate with an insurance network.

“I’m sensitive to [the notion of] one-sided negotiations,” Graham said. “But I just don’t find that to be the case. The bigger rub here is, for a very small group of providers it has almost become a business practice to balance bill, surprise bill.”

Keadey disagrees. Independent contractors, especially emergency doctors, who have to negotiate alone or in small groups against insurance companies, have “no leverage,” Keadey said. An insurance company has to offer prospective customers a network of hospitals and primary care doctors to be attractive, but not specialties like emergency ones, he said.

Keadey and his allies say if doctors are underpaid more, then more doctors will leave rural areas and specialties where they’re already scarce.

“On the face of it, you’re assuming that doctors are going to be able to stay in business at that rate,” said his ally, Michele Kimball, president and CEO of Physicians for Fair Coverage. “These guys save lives. Why are we nickel-and-diming them?”

“Families need to be able to anticipate what their health care costs are going to be, and budget accordingly,” Stephens said.