HomeIn the NewsBill could give borrowers who pawn cars better... 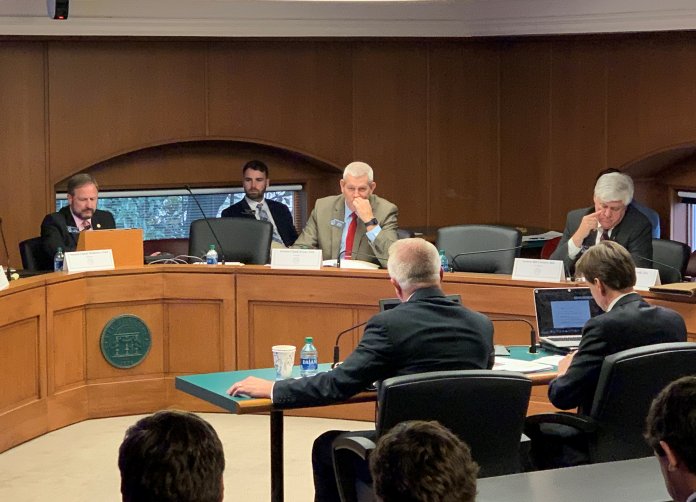 Sen. Randy Robertson, front left, tells Finance Committee members on Monday why he’s sponsoring legislation that would cap how much title loan lenders can charge in interest rates. The bill would protect people who often rely on the loans to pay their bills, the Cataula Republican said. Stanley Dunlap/Georgia Recorder

The Georgia Senate is considering a bill that would cap interest rates charged on car title pawns at 36% to clamp down on the last-ditch loans that often leave people stuck in a cycle of monthly payments that barely put a dent into what they owe.

With bipartisan backing and Senate Finance Committee Chairman Chuck Hufstetler as a sponsor of Senate Bill 329, consumer advocates like Georgia Watch are optimistic about its chances of becoming law. For years, the nonprofit fought to close some of the title lending loopholes that let companies effectively charge as much as a 300% interest rate on pawn loans.

The Motor Vehicle Title Loan Act proposes to cap the rate interest rate at 36%, regulating those types of pawn loans more like the small-dollar, short-term loan industry. Pawning a car title is a riskier type of loan since a person’s car can be repossessed if they are unable to pay it off.

A person borrowing $600 on their car title loan typically pays $2,000 effective interest over a one-year-period, according to Georgia Watch.

Cataula Republican Sen. Randy Robertson said he was spurred to sponsor the bill after hearing from a constituent that they discovered a family member about to enter a nursing home for memory care owed $3,000 from a $1,600 title pawn.

In addition to the steep interest payments, borrowers can also lose the car to repossession and the title pawn shop can keep any proceeds above the loan’s balance. A 2016 report from the Consumer Financial Protection Bureau found that one in five borrowers’ cars were taken because of missed payments.

However, title lending representatives countered Monday that capping the interest rate at 36% would force them close shop in Georgia.

They said they support some forms of title pawn reform but not this drastic. The cap could cost nearly 600 employees their jobs at TitleMax’s 200-plus stores in Georgia, as well at its Savannah headquarters.

Along with TitleMax, Georgia is also home to two other major title-pawn companies, Select Management Resources and Community Loans of America. Over the last decade, Georgia leads the nation in bankruptcy filings that have one of those three companies listed as creditors, according to an analysis by McClatchy and The (Macon) Telegraph.

Senate Bill 329 would provide Georgians with the same protection as military service members, whose interests rates are capped at 36% on most consumer loans under federal law.

In 2017, new federal regulations meant car title lenders were the only creditors that could charge an interest rate above 60%.

One senator said Monday that she’s bothered that lenders can still sell a repossessed car and keep the difference between the sales price and what’s owed.

“When there’s some default, you sell the vehicle. I mean that greed is what is the flashing lights for me,” said Sen. Nan Orrock, an Atlanta Democrat.

The committee adjourned without taking a vote due to lack of a quorum at meeting’s end.