Commission set to vote on scope of Vogtle, expansion schedule

HomeConsumer Energy ProgramCommission set to vote on scope of Vogtle...

Commission set to vote on scope of Vogtle, expansion schedule 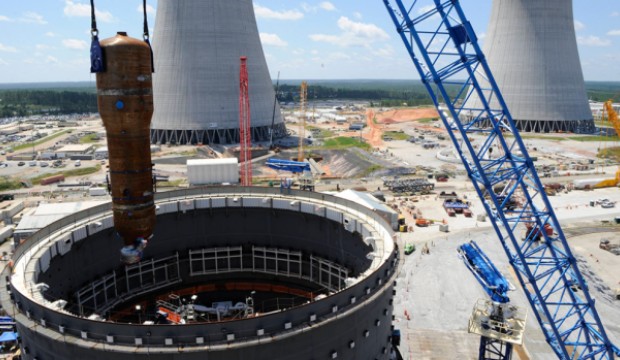 Clean energy and consumer advocates are worried that state regulators are about to put Georgia Power ratepayers on a path that will saddle them – and not shareholders — with all the financial burden of the troubled Vogtle nuclear power plant expansion.

The Georgia Public Service Commission is set to vote Tuesday on the scope and schedule for Vogtle’s Semi-Annual Construction monitoring review, which it expects to rule on by February. Georgia Power wants the regulators to include approval “as reasonable” its revised total project cost estimate of $12.17 billion and its construction schedule, which defers completion of Units 3 and 4 until November 2021 and November 2022, respectively.

Georgia Power officials say they are performing the next necessary step in the construction process. Advocates say it’s inappropriate to consider the reasonableness of costs yet.

“If the Commission accepts Georgia Power’s request (which is presented as take it or leave it), Georgia ratepayers will face unprecedented risk and significantly higher rates while shareholders will be guaranteed a high rate of return for decades,” Liz Coyle, executive director of the nonprofit consumer advocacy organization Georgia Watch, wrote in an email.

Vogtle’s two new nuclear reactors were initially scheduled to have been up and running in April, but the project has been plagued by delays and cost overruns capped by the bankruptcy of its main contractor, Westinghouse, last spring.

The analyses of the Public Service Commission staff show the project may never be viable, but elected commissioners have signaled they want the project to move forward.

Georgia Power, which owns 45.7 percent of the project, has said the other utility partners — Oglethorpe Power at 30 percent, The Municipal Electric Authority of Georgia at 22.7 percent and Dalton Utilities at 1.6 percent — all support completing the expansion, which would be the first new nuclear reactors in the U.S. in decades. The new timeline and cost schedules must be approved by the PSC, and Tuesday’s vote will shape what they consider before their February decision.

Georgia Power spokesman Jacob Hawkins said the company is doing what’s required of it for Vogtle Construction Monitoring, or VCM.

“We filed the 17th VCM Report and recommendation to move forward with the Vogtle expansion on August 31, including responses to specific issues requested by the Georgia PSC such as the reasonableness of the revised cost and schedule forecast,” he wrote in an email. “It is ultimately up to the Georgia PSC to determine the structure of each VCM proceeding — we will continue to work with the Georgia PSC and all parties through the VCM process.”

Under state law, Georgia Power has the burden of showing that excess costs, above what’s already approved, are both “reasonable and prudent.” The utility must make this showing when Units 3 and 4 are complete and when it seeks to add construction costs into its rates, which allows it to collect the costs from ratepayers. Doing so early amounts to a “sham prudency review,” Coyle wrote.

“The Commission should not fall for the same trick twice,” she wrote. “The Commission is under no obligation to approve the revised cost and schedule as ‘reasonable,’ and recent history, as well as the eye-popping nature of the latest figures, show why they shouldn’t. If the Commission does so, it will again have rubberstamped an enormous transfer of added risk from utility shareholders to customers. The size of this risk transfer is at least $3 billion (the difference between last year’s revised capital cost estimate – $5.68 billion – and the current one, $8.77 billion).”

Sara Barczak of the Southern Alliance for Clean Energy wrote to the PSC pointing out that nonprofit’s similar concerns.

While guaranteed a profit on approved costs, Georgia Power’s rate of return on its Vogtle investment does decrease as the project drags on and gets costlier, Hawkins noted.

“Under the settlement agreement approved by the Georgia PSC earlier this year, the company and shareholders suffer additional risk from further delays because the company’s return on equity was reduced effective January 1, 2016, and is further reduced as costs rise and the schedule is extended, and that continues until the Units go into service,” he wrote.

“But at this stage, with the project significantly delayed with tremendous cost increases, we have grave concerns about what approval of the latest cost projections would mean for customers – low-income customers in particular,” attorney Kurt Ebersbach wrote. “If the project is to go forward, customers must not be asked to bear all the risk.”