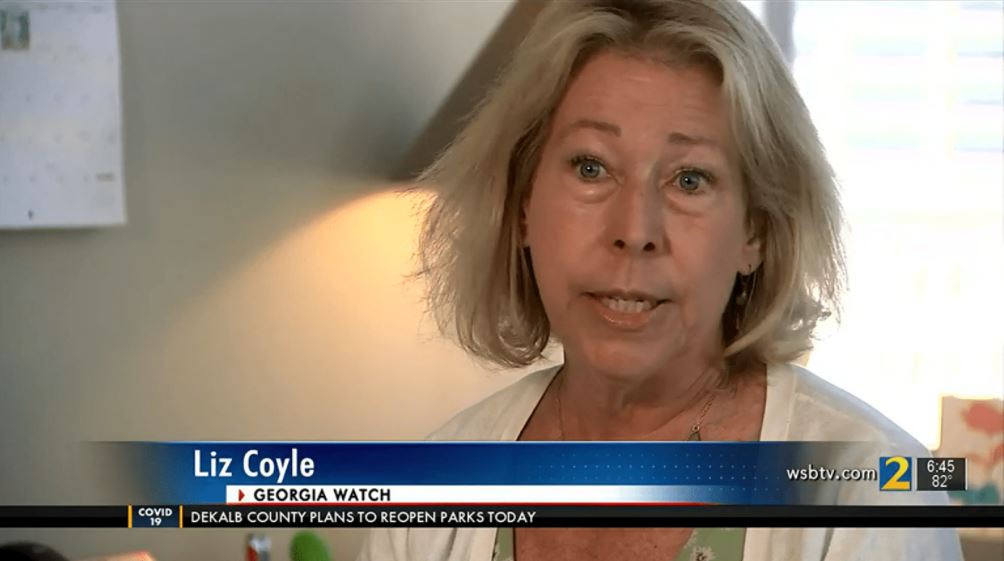 ORIGINAL STORY: An Atlanta company says it makes it easy for you to quickly get a loan to pay the people doing construction or repair work on your home. But a Channel 2 Action News investigation found the same things that make the system so simple could put your money at risk to shady contractors.

They ended up owing the same Atlanta company, Greensky, thousands of dollars.

Pots and pans cover the floor of 75-year-old Della Patterson’s LaGrange, Georgia, home. When it rains, water pours through holes in the roof of the house she has owned for more than 40 years.

“Me and my husband had this house built from the ground,” Patterson said.

But every day, for more than a year, Patterson’s phone would ring, sometimes multiple times a day.

“Sometimes, I just lay up in the bed and cry. And wonder why they do me like they did,” Patterson said.

It was an Atlanta company, Greensky, calling. Greensky wanted to be paid for the loan on the new roof. A loan Patterson says she never signed up for, and a roof that was never installed.

“If they had done anything from me and fixed my house, I wouldn’t mind paying them. But they did nothing for me,” Patterson said.

In DeKalb County, Alice Lowery owes Greensky more than $40,000 for work to remove mold and rebuild her basement.

Lowery is physically disabled and mostly blind. The basement is still a mess.

So how is Greensky involved?

Greensky calls itself a technology company, not a lender or a bank.

It’s pitch: In seconds, vendors can easily get a customer approved for a loan through Greensky with a smartphone or tablet. The money goes straight to that vendor, not the customer.

Consumer advocates say that is a big red flag.

“That is just so dangerous,” said Liz Coyle, executive director of the nonprofit consumer protection group Georgia Watch. “If a contractor wants to take advantage of somebody, Greensky gives them the perfect venue to do that.”

A roofer came by the house and tried to convince her to sign up for a Greensky loan. She says he called her repeatedly, trying to pressure her into getting the financing. Patterson says she never agreed to it.

“I said I don’t want to go through no loan,” Patterson said.

But she says the roofer signed her up for a Greensky loan anyway. He got the money, and never showed up again to do any work.

Greensky refused an on-camera interview, but the company’s vice chairman Gerry Benjamin told Gray in a phone call that they carefully vet merchants.

“If there is an unscrupulous merchant, we’ll throw them off the platform,” Benjamin said. “We are totally an advocate for the consumer.”

Benjamin said in an email:

“The GreenSky Program customer complaint rate is consistently but a fraction of that reported by Visa and Mastercard in card-not-present situations.”

Lowery’s contractor, Mina Ownlee of C and M remodeling, told us she tried to become an approved Greensky merchant and was turned down.

But she still got paid more than $20,000 from Greensky for the incomplete work on Lowery’s home anyway.

“You are not a Greensky vendor?” Gray asked.

“But she took out a loan with GreenSky and paid you through it?” Gray followed up.

Class action lawsuits have been filed against Greensky in California and Missouri.

In a 2018 court case, state of Alabama investigators determined Greensky “abdicated and outsourced its role and obligations as lender.”

After our phone conversation, Greensky’s vice-chairman personally stepped in and canceled Patterson’s debt.

Greensky says it kicked that roofer off its platform shortly after Patterson was unknowingly signed up for that loan.

But Greensky still tried to collect money from Patterson more than a year after.

As for how an unapproved vendor can get paid by Greensky, Benjamin wrote us, saying:

“Consumers are frequently provided with a 15 digit ‘shopping pass’ (ie. a virtual MasterCard), whereby any merchant accepting Visa, MasterCard, or Amex, via a customary POS terminal, may also accept Greensky as a mode of consumer payment.”