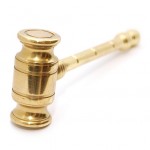 Court Watch today released its fourth annual report analyzing consumer-related decisions issued by the Supreme Court of Georgia. Court Watch is a project of Georgia Watch, a nonprofit and nonpartisan group committed to strengthening the rights of consumers. The 2010 Court Watch Report identifies and profiles the most noteworthy consumer-related appellate decisions released by the Supreme Court of Georgia throughout the previous calendar year, and identifies notable consumer wins and losses.

“The opinions from Georgia’s highest court last year had a considerable impact on the rights that consumers have under the law, particularly those regarding the access injured parties have to civil justice,” said Ashley Wilson, Georgia Watch staff attorney. “The Court Watch report is a necessary resource for consumers and legal professionals alike, as many of these cases would simply not be reported otherwise.”

“Georgia has many procedural hurdles that limit the consumer’s access to civil justice for fear that such access will hamper economic activity and increase the cost of consumer goods and services,” said 2010 Court Watch Fellow Simeon Niles. “Georgia must do more to protect consumers’ access to civil justice, because access to the court system is often the only means to redress for individual consumers harmed by their interactions with the marketplace.”