Georgia Power Co. executives testified Tuesday they don’t expect additional construction delays in the nuclear expansion at Plant Vogtle beyond the 18-month slip in the schedule announced in February.

The first of two additional reactors at the nuclear plant south of Augusta, Ga., isn’t expected to go into service until June 2019, followed one year later by the second new unit. Including an earlier scheduling delay, that puts the $14.5 billion project a total of 39 months behind schedule.

Delays are less likely to occur the closer the project gets to completion, David Clem, Georgia Power’s nuclear development director, told members of the state Public Service Commission (PSC) during a hearing.

“Every day, a tremendous amount of work is happening out there,” Clem said. “Every day, the risks are reduced.”

David McKinney, Georgia Power’s vice president for nuclear development, said the Atlanta-based utility’s contracts with Chicago Bridge & Iron andWestinghouse protect both Georgia Power and its customers from cost overruns resulting from the delays. Georgia Power and its utility partners in the project are pursuing a lawsuit against those two primary contractors.

While the case remains in litigation, the project’s critics are complaining about the impact of the delays on ratepayers.

Liz Coyle, executive director of Georgia Watch, said Georgia Power customers have been paying for the project since construction began without receiving the benefits of the electricity it will provide, a financial loss that will only continue to mount as the schedule lengthens.

“How much will they have paid by the time they get electricity from one of these units?” Coyle asked the Georgia Power executives during the cross-examination portion of Tuesday’s hearing.

Alison Chiock, director of resource policy and planning for Georgia Power, said Plant Vogtle continues to be a good long-term value for customers compared to any other potentially available energy source – despite the setbacks in the schedule.

The PSC is scheduled to vote Aug. 18 whether to approve $169 million in spending Georgia Power reported incurring on the project during the last half of 2014. 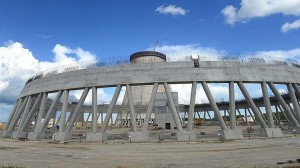 The Unit 4 cooling tower in the early stages of construction.