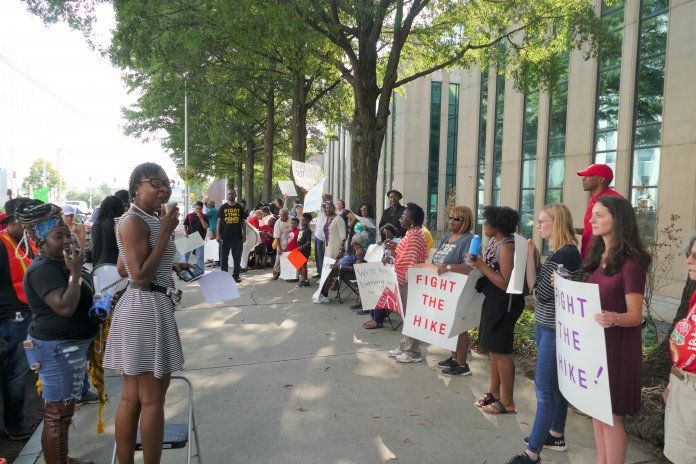 Georgia Power’s rate case is scheduled to resume Monday as the utility provider and state’s regulators try to resolve a billion dollar standoff.

The Public Service Commission’s staff is recommending that Georgia Power customers only cover $1.1 billion of the $2.2 billion rate hike the company is requesting over the next three years. A Georgia Power filing Friday sets the stage for another public debate in a series of hearings that began in September.

The regulators and the power company are far apart on how much more customers should pay in base rates, the company’s profit margin, and environmental cleanup cost.

The final ruling on the rate case is scheduled to be made by the five-member commission in mid-December.

Georgia Power proposes to increase its base monthly service charge from $10 to $17.95 by 2022. Disputing earlier comments from consumer advocates and the PSC staff in its Friday filing, the power company says its proposed rate hike won’t hurt lower-income residents or discourage people from being more energy efficient.

Consumer advocacy groups and some Georgia Power customers say a sharp uptick on the minimum fee people pay for electricity will in fact hit people living on fixed incomes the hardest.

The commission’s staff says a fairer alternative is a $2 base rate increase in 2021 while passing along more of the costs based on energy usage.

Georgia Power says poorer residents tend to use electricity less efficiently, so shifting the emphasis to consumption as the PSC recommends is more likely to benefit people who already conserve more energy.

“While the company supports energy efficiency … this cost shifting has a disparate impact on higher usage, low-income, customers who have fewer resources to invest in energy efficiency,” the filing said.

“The reality is there still are hundreds of thousands of Georgians who struggle to pay their utility bills each month despite (some) assistance programs,” the consumer advocate said.

Georgia Power says it needs the additional revenue to pay for $450 million in damages from Hurricane Michael and other storms, help cover $1.3 billion in infrastructure investment and recoup $525 million in projected coal ash cleanup costs.

The rate request does not include the looming tab for continued construction of the company’s Plant Vogtle expansion.

The Sierra Club and other conservation organizations are critics of the company’s $525 million coal clean up plan, especially for its lack of public information about how it plans to remediate 29 ash ponds and landfills where it will store the byproduct of its coal-fired plants around the state.

“Georgia Power’s plans for cleaning up its toxic ash are inadequate, and commissioners need more information and should wait until after permits are issued and the closure plans are approved by EPD before they make a decision about massive expenses that would be shouldered by Georgia ratepayers.” Sierra Club Beyond Coal Campaign spokeswoman Melissa Williams wrote in an email.

The PSC staff says Georgia Power’s coal ash projections are too high. The staff also recommends the utility company scale back its three-year plan and present updates for commissioners in 2021 and 2022 to provide more accurate details and shorter-term proposals.

Georgia Power, however, says it is working against tight deadlines in a complicated regulatory process.

“It is incorrect to characterize the cost of complying with federal and state (coal remediation) regulations as a burden with no benefit to customers,” the Georgia Power filing says. “Although the company relies less on coal as a generation resource today than it has in years past, the company’s coal fleet has served customers with reliable and affordable electricity for almost 90 years.”

The company and the PSC staff also need to iron out differences over what Georgia Power’s profit margin should be in the future.

The utility provider expert said that could lead to more capital costs, higher debt and worse credit ratings because of less interest from investors.

“This would represent the largest (return on equity) reduction for any utility over the past several decades; notwithstanding the company’s exemplary performance over the past six years since rates were last set,” consultant Steven Fetter testified.