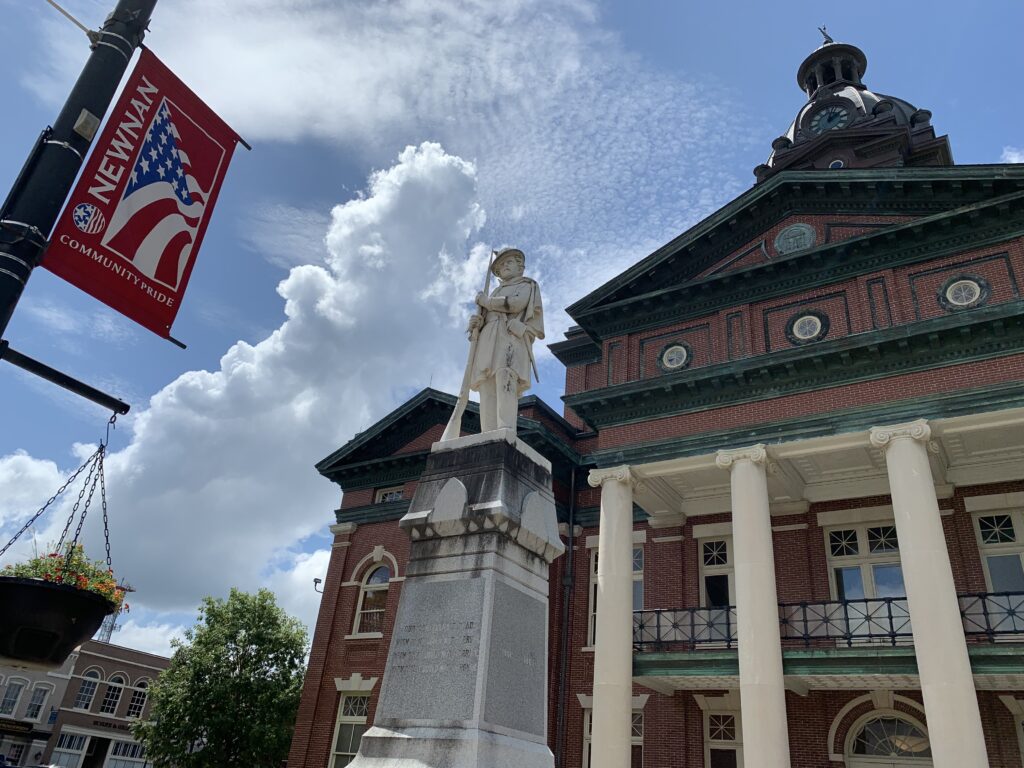 Georgia Supreme Court justices heard arguments Thursday on cases that could determine if an organization with Confederate roots must prove they would be harmed by the removal of monuments in order to sue local government officials.

The consolidated case stems from lawsuits filed by the Sons of Confederate Veterans against the Henry and Newton County commissioners, who voted to remove Confederate statues from downtown public squares in 2020.

The‌ ‌plaintiffs‌ ‌appealed‌ ‌to‌ ‌the‌ state ‌Supreme‌ ‌Court‌ ‌after the Court of Appeals ruled in favor of the counties, ‌claiming the appeals court erred in holding that they must prove an individual injury to be entitled‌ ‌to‌ ‌sue. ‌In the event that they had standing, the appeals court ruled that their claims would be barred by sovereign immunity. Until repealed in 2021, sovereign immunity law protected government officials acting in their official capacity.

Complaints filed July 2020, by a Newton resident and the Sons of Confederate Veterans alleged that county commissioners broke the law while voting to remove a Confederate monument from the downtown square in Covington and place it in storage.

A Confederate monument of soldier Charles T. Zachry was removed overnight in July 2020 from the downtown McDonough square. The Henry County monument is believed to have been erected by members of the Daughters of the Confederacy in about 1910.

King says those laws permit the Superior Courts to hear those cases and determine if civil penalties should be awarded for claims “that can be brought by the Attorney General” or “any person, firm, corporation, or other entity.”

Under this law, an organization does not need a special interest in order to have a sufficient claim about ‌enforcement‌ ‌of‌ ‌a‌ ‌public‌ ‌duty, King said.

“Standing is certainly required if you’re challenging the constitutionality, but again, that’s not the case,” he said.

King said no matter who files the lawsuit, any damages that are assessed would have to be used for public good.

“If we were to succeed and obtain damages in the amount of what’s required to repair and replace the monuments, we can’t just pocket the money,” he said. “We have to spend that money to do what was intended to do, replace or repair the monument.”

Patrick Jaugstetter, attorney for Newton County Commission, said this is a case that raises questions whether the legal standing should be determined through a judicial or legislative process.

He noted that under the Open Meetings Act, a person can sue for civil penalty but not for damages caused by injury.

Justice Nels Peterson countered that the Open Meetings Act does not require a plaintiff to have been uniquely injured in any particular fashion.”

“And in fact, in most cases it can be very, very difficult. The only real way you could be uniquely injured is if you’re on the agenda, and you’re voted on,” Peterson said.

The violence that erupted during a 2017 Charlottesville, Virginia, demonstration in support of a Robert E. Lee statue planned for removal spurred local officials in other cities and counties to dismantle Confederate memorials. Counter efforts were put in place to block their removal.

In 2019, Georgia Republican Gov. Brian Kemp signed legislation prohibiting the dismantling and moving of publicly owned monuments without taking steps to protect them for interpretation, as part of legislation that increased fines for vandalizing public statues.

And by the summer of ‌2020, protests across Georgia and the nation following the murder of George Floyd prompted more people to call for the removal of Confederate memorials from public places as the monuments erected during Jim Crow were considered symbols of white supremacy‌ ‌and‌ ‌racism. Some state lawmakers have called for a statue of a Confederate general to be removed from its prominent spot on the Georgia Capitol grounds.

In Georgia, local government leaders voted to remove and relocate Confederate memorials in cities such as Athens, Decatur, Conyers and Cordele, where a new majority Black city commission voted this year to remove its statute despite concerns about whether it had legal authority.

Peterson said that while the lawsuits raise other interesting questions, the only focus remains on whether there is legal standing provided under federal law.

“The Court of Appeals held there is no standing based on the federal Article Three case law,” he said. “Now I can’t fault the Court of Appeals for that because this court has been applying that case law for the last decade or two without really explaining why.”

Chief Justice David Nahmias Thursday referred to a brief filed in the case by consumer advocacy group Georgia Watch, which Nahmias said raises questions of how an attorney could litigate certain cases without personally being affected by them.

“They (say) that if the Court of Appeals is right, then all the consumer protection statutes in the state are potentially void,” Nahmias said. “And those are statutes under which you get monetary penalties and damages.”

Jaugstetter said that because the only recourse under the monument law is to recover damages, that requires someone to show how they suffered an injury. In the case of the Sons of Confederate Veterans, their not showing concrete damages but only hypothetical ones.

“Step one in any claim is there must be a breach of duty that resulted in an injury,” he said. “Step two is damages awarded to compensate for injuries. What we’re suggesting is these plaintiffs have not established an arguable breach of legal duty.”