HomeHealth Access ProgramMedicaid expansion and the fate of Obamacare...

A national battle over whether to extend public health insurance to low-income adults is at the center of a tightly contested gubernatorial race in Georgia, where hospitals and drug stores are closing across the Republican-controlled state’s rural southern and western counties.

Georgia is one of eight states that opted not to expand Medicaid and will choose a new governor this year. Brian Kemp, the two-term GOP secretary of state, and Stacey Abrams, a former Democratic leader in the legislature, are competing in a race that mirrors the polarizing nature of health care in the country. Kemp opposes broadening the scope of Medicaid, while Abrams is for it. Medicaid expansion is a key feature of the Affordable Care Act, also known as Obamacare.

In Georgia, low-income residents have experienced high unemployment, a shortage of health care providers and long commutes to get proper care in a state opposed to Medicaid expansion. But an obstacle for Abrams is persuading rural voters, who associate Medicaid expansion with Obamacare, which they perceive negatively.

It’s a potential hurdle for Democrats nationwide this fall. Democratic candidates stumping on health care have a solid chance of picking up seats in a number of legislatures. But in statewide elections where more conservative, white voters are a significant portion of the electorate, the party could face an uphill battle.

Some bipartisan support for Medicaid expansion

Medicaid expansion would cover nearly half a million more people in Georgia, according to an analysis funded by the Robert Wood Johnson Foundation. Georgia is one of 17 states to reject expanded federal Medicaid funding. Term-limited Republican Gov. Nathan Deal has long opposed expansion based on the belief that it would cost the state too much money in the long run.

“States across the country that have Medicaid expansion are doing so much better than Georgia, which has a serious rural hospital crisis and coverage gap,” said Dorothy Leone-Glasser, director of Advocates for Responsible Care, a nonpartisan advocacy group in the state. “With this year’s election, we can press candidates on how the state needs to expand Medicaid, bring down uninsured rates and close the gap for people who lack critical health care access.”

Polling suggests that even Republicans in the state largely support Medicaid expansion. A Survey USA poll last week found 70 percent of registered Georgia voters back expansion, including 55 percent of respondents who identified themselves as Republicans. An Atlanta Journal-Constitution poll from January shows that 73 percent of Georgians back the provision.

While Abrams has made Medicaid expansion the centerpiece of her campaign, Kemp vehemently opposes it. Like most other Republican leaders in nonexpansion states, he promises instead to open up the private sector market to more competition to lower health costs.

What’s at stake across the country

In an interview with CNBC, Abrams said Medicaid expansion is not a partisan issue. “Governors from all across the political spectrum have expanded Medicaid — from Mike Pence in Indiana to West Virginia and Kentucky — and Georgia can do the same,” she said.

Kemp has dismissed Medicaid as a failed government program with high costs for the state.

“To add more people to a system where doctors aren’t taking patients and they’re losing 14 cents on the dollar is not the way to go,” Kemp said recently.

He also argued that Abrams “has an extreme plan to nationalize health care and stick hard-working Georgians with the bill,” through a required tax increase. That rhetoric echoes attacks from national Republicans, including President Donald Trump. Kemp promised to fund more residency positions in family medicine and grow the Rural Hospital Tax Credit Program so rural hospitals could earn more from individual or corporate tax credits.

In Georgia and the seven other nonexpansion states —South Dakota Oklahoma, Florida, Texas, Alabama, Missouri and Mississippi — more than one-third of low-income adults living in rural areas and small towns are uninsured, according to a recent study by the Georgetown University Center for Children and Families.

On Election Day, voters in Idaho, Nebraska and Utah will decide whether their states should increase access to Medicaid. Montana voters will choose whether to keep that state’s expansion, and the issue has also taken root in Florida and Wisconsin’s gubernatorial races. 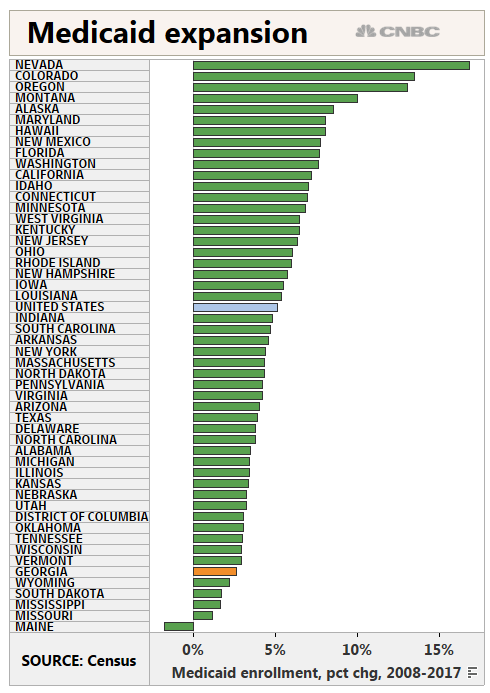 Democrats, in turn, have used health care as their no. 1 issue in midterm races. Other Democratic gubernatorial candidates that support Medicaid expansion under the Affordable Care Act include Andrew Gillum in Florida, Laura Kelly in Kansas, and Janet Mills in Maine. They are all locked in contested races against Republican leaders that have opposed the provision.

GOP candidates in other states, such as Bill Schuette in Michigan and Mike DeWine in Ohio, also have to grapple with whether to keep Medicaid expansion. Both Republicans have flipped their positions and now support keeping the provision, with exceptions involving work requirements for nondisabled beneficiaries.

For Abrams, winning over rural voters in Georgia who associate Medicaid expansion with Obamacare will pose a challenge since she is a traditional liberal running in a classically conservative state. Republicans have made her leftward leanings a key part of their campaign against her. An ad from the Republican Governors Association over the summer called her a “radical” and “too liberal for Georgia.”

Kemp has a 2-point lead, according to a Real Clear Politics average of polls. To win, Abrams will need to make inroads in parts of the state that tend to be whiter and more conservative. She recently took a three-day tour to southern Georgia in a bid to persuade skeptical Republican voters. She framed her argument for expansion as not a progressive talking point, but rather as a pragmatic pro-growth initiative for the entire state.

It won’t be clear until the election whether she changed enough minds to win. GOP strategists say that deeply entrenched conservative voters are unlikely to break from their party and support Abrams’platform.

“Abrams does not have a chance to overperform with rural Republican-leaning counties because that issue will be tied around her as ‘Obamacare,'” said Republican pollster Brent Buchanan. “Usually lower-income voters are lower-propensity voters, so it takes much more to get them to the polls than persuading the people who are most likely to vote — middle-income and upper-income voters.”

Abrams, who would be the country’s first black female governor if she wins, has talked of bringing more medical care to rural Georgia through a government program for low-income people. She also recently released a six-page platform that calls for Medicaid expansion with more services for seniors and the disabled, medical apprenticeships and doctor relocation. The plan also calls for the protection of the Affordable Care Act.

Even if Abrams wins and Democrats gain some seats in the GOP-controlled legislature in November, she would face a tough battle against the Georgia lawmakers who oppose expansion.

Kemp, on the other hand, has supported the lawsuit brought by 20 Republican-led states and backed by the Trump administration, which would allow insurance companies to stop covering people with pre-existing medical conditions. Advocacy groups for health care and rural hospitals in Georgia have condemned the lawsuit. Kemp’s plan would not reduce Georgia’s growing uninsured rate, according to Joan Alker, director of the Georgetown study.

“Brian Kemp’s plan seems to focus on promoting reinsurance programs that would largely benefit individuals who already have access to health insurance options,” said Liz Coyle, executive director of Georgia Watch. “Without some form of Medicaid expansion, hundreds of thousands of Georgians would still remain in the coverage gap without access to affordable coverage.”

Kemp has a structural advantage in the conservative leaning state. In the past two gubernatorial elections, Deal won the central and eastern part of Georgia and all but one of the counties Abrams visited on her recent tour. The Republican governor won three of those five counties by double-digit margins. Trump won the entire southern region despite only carrying the state narrowly over Democrat Hillary Clinton in 2016.

These traditionally red counties are unlikely to turn blue, since strong, partisan loyalty is a tough pattern to break. Experts say Kemp has already locked down his base.

“Kemp thinks he needs to rally his base to win, and opposing Obamacare Medicaid expansion is popular among the conservative Republican voters in the state, who do not realize the connection between the Medicaid expansion and rural health care,” said Georgia State University political science professor Robert Matthew Howard.