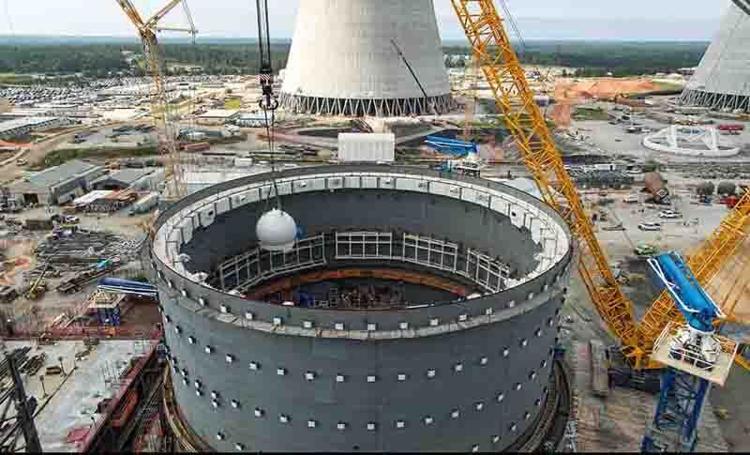 ATLANTA — Georgia energy regulators are expected to vote this week to verify and approve $674 million Georgia Power Co. spent on the Plant Vogtle nuclear expansion during the last half of 2019.

But opponents of the $25 billion project say the state Public Service Commission (PSC) should go well beyond such a routine decision and start examining how much building two additional nuclear reactors at the site south of Augusta is ultimately going to cost and how much of that customers should have to pay.

“As we get closer to the approved completion dates, the commission should be expanding the scope of its review,” said Kurt Ebersbach, senior attorney for the Southern Environmental Law Center, which has filed with the PSC as an intervenor in the case. “Otherwise, the commission is kind of on autopilot.”

“If we get some sense now how much residential customers will be impacted, the commission could take some steps to mitigate it,” added Liz Coyle, executive director of Georgia Watch, an Atlanta-based consumer advocacy group.

The PSC approved the Plant Vogtle expansion 11 years ago. The project’s estimated price tag at the time was $14 billion.

The cost has nearly doubled since then, due in part to the bankruptcy several years ago of Westinghouse Electric, the original prime contractor. Management of the project has since been turned over to Southern Nuclear, like Georgia Power a subsidiary of Atlanta-based Southern Co.

Obstacles with the next-generation AP1000 reactors developed by Westinghouse also contributed to the cost overruns at Plant Vogtle. Trouble with the AP1000 technology prompted two utilities in South Carolina to scrap nuclear expansion projects there three years ago.

Rather than cancel the Vogtle project, however, the PSC voted in late 2017 to let Georgia Power and three utility partners finish the work. Commissioners also agreed to hold off any decisions on whether the cost overruns encountered by the project were “prudent” and, thus, could be passed on to customers, until after the new reactors are finished.

The schedule for completing the Vogtle project also has been delayed substantially. The first of the two new reactors originally was to go into service in 2016, followed a year later by the second reactor. That timetable has slipped to November of next year for the first reactor and November 2022 for the second.

Even that schedule is in danger of further delays, while the final price tag is expected to go higher, a consultant retained by the PSC’s Public Interest Advocacy Staff testified during a hearing before the commission earlier this summer.

Donald Grace, vice president of engineering for the Vogtle Monitoring Group, said the project’s final cost is going to increase by at least $1 billion. Whether it goes higher than that depends on how far the completion dates slip beyond the current schedule, Grace said.

The coronavirus pandemic is contributing to the latest delay. Georgia Power laid off 20% of the project’s workforce in April – about 2,000 workers – after 42 employees tested positive for COVID-19.

Southern Co. CEO Tom Fanning acknowledged in an earnings call last month that the project’s cost will go up by $149 million partly due to the impacts of the pandemic. However, the company still expects to get the two new reactors operational under the current timetable.

Environmental and consumer groups want the PSC to start considering how the cost increases at Vogtle are going to affect customers sooner rather than later.

But Steve Hewitson, a lawyer representing Georgia Power, told commissioners last Thursday the Vogtle Construction Monitor (VCM) spending updates the utility files every six months are not the proper forum for discussions of the project’s impact on customers.

“The VCM process is for verification and approval of costs incurred and to report on progress of the Vogtle expansion project,” Georgia Power wrote in prepared statement. “It includes public hearings held at the PSC, as well as reports filed by the PSC staff’s independent construction monitor as part of Georgia’s open and transparent regulatory process.

“We agree with the [commission’s] Public Interest Advocacy Staff that specific ratemaking questions should be addressed in a separate filing with the PSC closer to commercial operations of the units.”

Ebersbach said he’d like to see Georgia Power take up the ratemaking issues sooner, when the company files its next semi-annual VCM report. The commission is expected to receive that report by the end of this month.

Coyle said even if that doesn’t happen, the testimony being provided by Grace and others is building a case that should convince the PSC ultimately to reject at least some of the cost overruns at Vogtle as unreasonable, which would force the company – not customers – to pick up the bill.

“The most important thing happening right now is the commission’s staff, the independent construction monitors and the intervenors are getting information into the record now that will be critical when the prudency hearings begin,” she said. “Hopefully, some of these costs will be deemed imprudent.”