We focus on ensuring laws are in place to protect consumers’ financial well-being, such as preventing predatory lending, and on opening doors to the financial mainstream. We particularly work to help disenfranchised communities gain access to financial products and services to close opportunity gaps and promote economic mobility.

J. Laney’s car was repossessed in 2009—at the time of repossession, she owed $10,000, but she received a letter stating it had been resold and thought that was the end of it. Over a decade later, in 2021, she realized her wages had recently started being garnished for the same car—there had been a judgment on a case against her she knew nothing about. From a default judgment, she owes the original amount on the car plus 12 years of interest. The amount she owes now: $25,000!

According to Georgia Attorney General Chris Carr, the number one consumer protection complaint to the Department of Law in 2020 was debt issues. For middle and low-income families, basics like housing, healthcare, childcare, and putting food on the table have become a financial balancing act. Georgia is one of the top four states for personal bankruptcy filings, 67% above the national average. With hardworking families already struggling to make ends meet, wage and bank garnishment are more bricks on the scale of the debt trap cycle. In 2019, the Administrative Office of the Courts of Georgia tracked 59,560 garnishment case filings—an increase of over 10,000 since 2016. Now, with the unprecedented challenges mounted on Georgians from the pandemic, more protections against garnishment are vital to ensure their financial stability.

State exemption laws are a fundamental safeguard designed to protect consumers and their families from poverty, allowing them to achieve financial stability. But in a recent report from the National Consumer Law Center, Georgia has some of the weakest protections in the country, receiving an F rating for the state’s failure to meet even the most basic standards.

Tell Us Your Predatory Lending Story 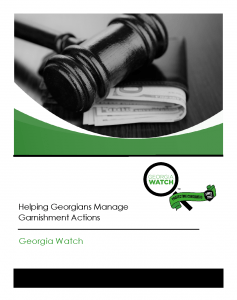