The resistance is alive and well in Macon

HomeGeneralThe resistance is alive and well in Macon

The resistance is alive and well in Macon 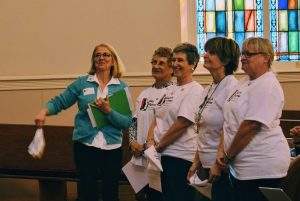 In the doorway of the church, the line to get in kept slowing down as friends greeted each other with hugs and laughter, chatting and catching up. There was no rushing these greetings; folks, after all, had come to Macon’s historic First Baptist Church of Christ early on a Saturday morning, many still working on their first cup of coffee, and they had a long morning ahead. The day started off cool, a southern spring day with no bite of summer yet, as over 120 folks from across Middle Georgia streamed into the church.

Like so many, they came because the election of Donald Trump feels like a surprising, devastating loss for the America they value and believe in. They came because, over the past few months, Georgia Women (And Those Who Stand With Us), the organization leading the day’s planned political advocacy workshop, has made a name for itself as an up-and-coming group that gets things done. They came to learn about the pressing political issues in Georgia and what they could do about it.

After hugs and handshakes, the usual scene before any workshop: check in with Marty at one table and get your nametag, Kay passed out the programs, another table had flag pins. And folks were given a little white handkerchief that read “Georgia Women (And Those Who Stand With Us).”

The day ahead was an advocacy training. After a little time for coffee, donuts and homemade peanut butter cookies, folks filled the church sanctuary — a purple cloth wrapped around the cross in advance of Easter, in a baptist church that is almost 200 years old.

Former State Rep. Nikki Randall was present, sharing a few laughs with people, as was State Sen. John F. Kennedy, who shook hands and also chatted with attendees. Folks who later took the rare opportunity for one-on-one face time with an elected leader to press him about his support for the ‘campus carry’ measure.

Many of the seven women who lead the steering committee of Georgia Women — Claire Cox, Brenda Sutton, Marty Koplin, Lynn Snyder, Tracie Jenkins, Amy Dever and Roz Goudeau — and the 120 folks who attended become politicized after the election of Trump. But this group does not just lament the political climate over coffee. So far, they’ve attended the Women’s March in Atlanta, organized a trip to their local Congress member’s office and successfully won a local campaign to get the city of Warner Robins — a conservative town just south of Macon — to offer paternity and maternity leave to their employees.

And this has all been since January.

At Saturday’s gathering, Cox finally explained the significance of the white handkerchiefs.

“In a recent spirited debate, Amy Dever gifted us all with a white handkerchief that was her grandmother’s. Everyone learned that when Amy gets stressed she irons. A way to bring order from chaos,” Cox told the crowd to laughs.

As Cox explained, it’s a symbol of bringing “organization and advancement from our current feelings of chaos.” And for Cox and the other organizers, it’s a commitment to their particular approach to advocacy work, rooted in the ways they do and don’t want to be disruptive in their community.

During the various breakout sessions, folks sipped on the last of the coffee and listened intently as speakers from organizations as diverse as Georgia Equality, Georgia’s WIN List, Georgia Watch and Public Education Matters Georgia shared insights about the political landscape, the challenges ahead and how to successfully press for change.

“What I want you to know this morning is that change is possible. Our legislators really do listen, especially when they hear from their constituents,” Better Georgia’s own Amy Morton said during the keynote. “We want to elevate your voice in this discussion about the future of our state.”

By lunchtime, folks were exchanging contact information with new connections, chatting excitedly about what they had learned and what they planned to do next. In fact, the following day Georgia Women was participating in a Pilgrimage for Immigrants, an event organized by Macon faith communities to support immigrants. They’ll be caravanning to Atlanta for the March for Science next month, and are working with other local groups on passing a non-discrimination ordinance in Bibb County (the home to Macon), to protect LGBT employees of the county from employment discrimination.

“One woman by herself can be very powerful, you think about Mother Teresea, Margaret Sanger, and Rosa Parks,” Kay Shurden, a member of Georgia Women and a congregant of the church, told the crowd during short remarks welcoming them to First Baptist. “But when a lot of voices that have the same values get together, it is extremely powerful. And it can change the course of history.”

By the time they were winding down, local Mercer professor Andrew Silver dawned his guitar to lead the group in a round of “This Land is Your Land,” the well-known Woody Guthrie folk song, ending the event on a positive, energized note.

Cox’s welcoming comments perfectly summed up the day, “Whatever viewpoints bring us here, we are all a part of this nation, and a desire to make it a more perfect union.”