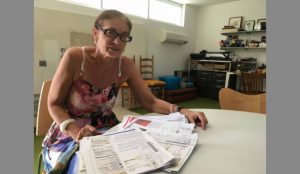 Cornelia Stumpf looks over old power bills. Since 2011, when the fee was initiated, she’s paid about $500 for the troubled nuclear Plant Vogtle. Photo by Mary Landers/Savannah Morning News

The costs for Georgia Power’s troubled Plant Vogtle are adding up, but not for the utility or its investors.

Instead, ratepayers are already paying for the two new nuclear reactors, both of which may never produce a watt of electricity. How much have customers already dished out? For southside Savannah customer Cornelia Stumpf, the Vogtle bills already total more than $500.

And that sum increases every month.

Stumpf’s situation reflects that of many Savannah area residents. She lives in a 1,900-square-foot midcentury modern house in Magnolia Park, running her marketing and public relations business from a separate 300-square-foot office in the yard for a total of about 2,200 square feet of conditioned space. A pool in the side yard requires a pump that eats up electricity but her heater runs on natural gas, so her overall usage is typical for Savannah. Her winter bills dip to about 1200 kilowatt hours. Summer zooms to nearly double that amount.

Georgia Power started charging residential customers the nuclear construction cost in 2011 after lawmakers gave the monopoly utility the go-ahead to charge ratepayers for the multi-billion dollar project as it was being built, and before it produces its first kilowatt hour of juice. The amount appears as a line item of the monthly bill under “Nuclear Construction Cost Recovery.”

“It’s a chunk of money,” said Stumpf as she pored over the six years’ of bills she pulled out of storage. “I’m not pleased with this. I could have done something environmentally friendly. I could have fed my dogs. I could’ve donated it to charity. That’s something I’d rather do than pay for a power plant that’s not coming along anyway.”

A history of delay and cost

Plant Vogtle, a nuclear power plant on the Savannah River near Waynesboro, began commercial production in 1987 for its first reactor and 1989 for its second after a string of construction delays and cost overruns. The project was initially expected to produce four reactors at a cost of $660 million. The two reactors in the end cost more than $8 billion, resulting at the time in the largest rate hike in Georgia, according to the Southern Alliance for Clean Energy.

Nevertheless, in 2006 Southern Nuclear, a sister company to Georgia Power, applied for a permit to expand Vogtle with two additional reactors. Wall Street found the project too risky to back but it was able to advance after Georgia lawmakers allowed the company to charge customers in advance for the financing and taxes. In 2010, the Obama administration granted the project $8.3 billion in federal loan guarantees.

Almost immediately the construction faced expensive setbacks. It’s now more than $3 billion over budget and three years behind. With its original April 1, 2017, completion date come and gone it’s less than 40 percent complete. However, the Georgia Public Service Commission, a board of five regulators elected statewide, has found nothing “imprudent” in the handling of the project and allowed that Georgia Power can continue to impose the additional costs on its ratepayers rather than spreading the pain to investors as well.

The latest blow to the project came as Westinghouse, which is building the reactors, filed for bankruptcy on March 29. It looks grim for ratepayers, said Stephen Smith, executive director of the Southern Alliance for Clean Energy.

“The financial meltdown and now bankruptcy of the design build company for the AP1000 nuclear reactors, Toshiba’s Westinghouse, has created a worst case scenario for electric power customers in Georgia and South Carolina,” Smith said. “There are more questions than answers at this point in time and there is no path forward without some additional financial pain for customers.”

Georgia Power said it’s been preparing for this possibility.

“While we are working with Westinghouse to maintain momentum at the site, we are also currently conducting a full-scale schedule and cost-to-complete assessment to determine what impact Westinghouse’s bankruptcy will have on the project and we will work with the Georgia Public Service Commission and the co-owners to determine the best path forward,” said spokesman Jacob Hawkins. “We will continue to take every action available to us to hold Westinghouse and Toshiba accountable for their financial responsibilities under the engineering, procurement and construction agreement and the parent guarantee.”

Southern Company CEO Tom Fanning flew to Tokyo ahead of the bankruptcy announcement to stress to the CEO of Westinghouse parent Toshiba that Vogtle is one of its main customers and that Toshiba has a “moral obligation” to finish the project, Fanning told Bloomberg Television.

But it was Southern’s customers, not Toshiba’s, that were on Smith’s mind. They shouldn’t have to keep paying as costs spiral and timelines stretch, he said.

“If the cost of completing the facility can no longer be accurately predicted the project should be closely and thoroughly reevaluated to reflect market conditions before more ratepayer money is committed to the high-risk project,” Smith said. “(I)f the companies choose to build an electric generation facility with unknown costs to complete and unknown schedules, they should have their shareholders carry the risk not the ratepayers in the area.”

No end in sight

From her home in Magnolia Park, Stumpf recently emailed Georgia Power to ask if the nearly 10 percent she pays on her base bill for nuclear will be discontinued now that the projected completion date has come and gone.

An online staffer apologized for the “inconvenience,” and then wrote in part: “We are currently conducting a full-scale schedule and cost-to-complete assessment to determine what impact Westinghouse’s bankruptcy will have on the project.”

Consumer advocates say the company and the PSC must look at all options, even that of stopping construction and losing the sunk costs. Georgia Power’s 2.5 million customers have already paid more than $1.2 billion for the project, which works out to $480 each, a little less than what Stumpf has paid. The recently approved schedule with a 39-month delay looks like more of the same, or worse.

“Its right now about $10 a month average,” said Liz Coyle executive director of Georgia Watch. “It’s not going up in ‘17 but will go up in ‘18 and ‘19 if they continue constructing the units. The longer delays just lead to higher costs there.”

If construction does moves forward, Smith is calling for a cap on spending plus a realistic and binding schedule to limit risk to customers.

“These are the most basic things that must be done,” he said. “If can’t be done it’s time to walk away and stop throwing good money after bad.”

Regulators will have the opportunity to add consumer protections if the company seeks recertification of the construction project. To do so the company would have to show that completing Vogtle is more economical than starting from scratch with a natural gas plant or with renewables. Demand for electricity has decreased in Georgia in recent years, despite a growing population. Coyle counseled that more generating power may not be needed at all.

“We believe those decisions could be made when the state knows it needs additional capacity,” she said. “We know right now the state does not need the capacity for Vogtle 3 and 4.”

Even if construction stops, customers lose.

“You don’t get a rebate if they cancel this project,” said Sara Barczak, of the Southern Alliance for Clean Energy.

If Vogtle is completed customers will start paying construction costs in the form of rate increases that Coyle expects will be an additional 6 percent to 8 percent per month. But those will be spread over the expected 60-year life of the plant.

“My guess if they stop construction and put sunk costs into the rate base they’d have a much shorter schedule that they’d want to recover so that could have a big impact on customers’ bills very soon,” Coyle said. “A key question we have is if that were to happen would the commission allow them to collect their 10.95 percent profit.”

Stumpf wonders if she’ll ever see any benefit from Vogtle.

“I don’t have a problem paying for something where I get a return,” she said. “But I cannot wait for the next 50 years for cheaper energy because at that point I’m dead.”

In the meantime she’s putting aside her file of old electric bills.

“I’m going to keep it all in a folder,” she said. “Somebody is going to file a class action suit against Georgia Power.”