Vogtle hiring slow, but progress made on construction

HomeConsumer Energy ProgramVogtle hiring slow, but progress made on...

Vogtle hiring slow, but progress made on construction 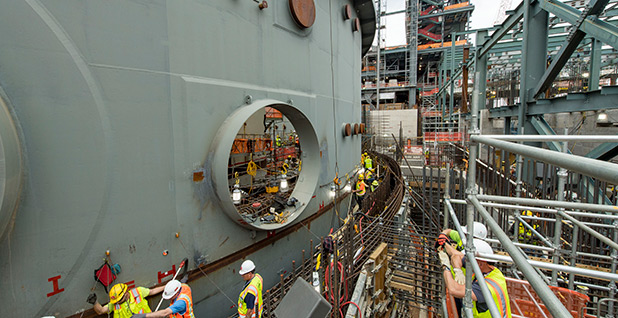 Work at Southern Co.’s nuclear expansion project continues to be ahead of its new schedule, but officials said productivity still must increase to ensure the reactors can be finished on time.

Productivity had dogged the Plant Vogtle project for years under previous contractors and subcontractors. Georgia Power officials have routinely testified that things would improve after each major contractor change.

Again, executives said the situation is better. What is different now is that they have proof, they said.

“We have full control,” said Stephen Kuczynski, CEO of Southern Nuclear. “We expect to meet our commitments.”

Georgia Power and a group of public power companies are building what are now the nation’s only nuclear reactors from scratch in roughly 30 years. Prior to Westinghouse’s bankruptcy, the project suffered from a number of delays that pushed the reactors years behind schedule and billions above their forecasted budget.

The electric companies argued they should finish the reactors because they will put emission-free baseload electric power on the grid for decades. The pro-nuclear Georgia Public Service Commission agreed, signing off on new target dates of November 2021 and 2022 at the end of last year.

Georgia Power and Southern Nuclear have said publicly they are roughly eight months ahead of that and reinforced that statement yesterday, the first hearings since the PSC’s key December vote. Stakeholders continued to press company executives for information about the project’s schedule, however.

For Vogtle, the word “schedule” has a number of different meanings. There’s a highly detailed list of thousands of jobs and the amount of time and people it takes to complete them. There’s also the issue of productivity and efficiency.

Jeff Stair, an attorney for the PSC’s staff, asked about the “integrated project schedule.” Stair pointed out that an independent group of experts who met at Vogtle about a month ago was critical that one still did not exist.

Kuczynski put together the group, known as the Vogtle Construction Review Board. Members are supposed to look at construction and management critically, he said.

“They gave us areas of improvement,” he said, acknowledging that having that more detailed schedule was one of those. Southern Nuclear has now finished that schedule through the reactors’ completion dates, he said.

“So now we have a very, very strong scheduling tool that is really what we will use to manage the project going forward,” he said.

Separately, Southern Nuclear is working with Bechtel Corp., now a major contractor, to improve work efficiency. Using a measure known as earned work hours, those figures have more than doubled since the time that Westinghouse and subcontractor Fluor Corp. were at the helm.

Southern Nuclear wants those figures even higher, a goal that Kuczynski said can be met as more tasks become available and workers start using commodities other than rebar and concrete, which are tougher to handle.

A bigger challenge is improving efficiency. While productivity is higher, executives said they have spent more money to get there.

Liz Coyle, executive director for the consumer group Georgia Watch, asked if the company is paying more to get increased productivity.

“You’re not paying more for a faster schedule,” Coyle asked.

This is because in the next six months, work will increase at the reactor vessel, something that Fanning described as “a lot of intense work in a very confined area.”

“I wouldn’t be surprised that this outperformance on schedule slows a bit and perhaps erodes a bit,” he said in an interview with E&E News yesterday.