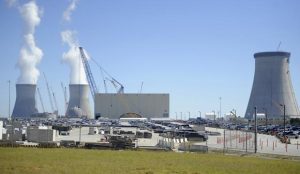 Courtesy of The Augusta Chronicle.

By Thomas Gardiner – The Augusta Chronicle

Troubled Toshiba Corp. has decided to file bankruptcy at month’s end for its U.S. subsidiary Westinghouse – the primary contractor at Plant Vogtle – according to reports, putting the construction of two nuclear reactors there and Georgia Power customers in the financial cross-hairs.

With the pressure on the Southern Co., Georgia Power’s parent company, and the Georgia Public Service Commission, continued construction progress and cost diffusion to ratepayers has become a chief concern. According to PSC Vice Chairman Tim Echols, Georgia Power is expected to take all available options to that commission.

“Any dollar amount, whether under or over the certified cost, cannot be recovered without the PSC’s approval,” Echols said.

Consumer watchdog group Georgia Watch said the PSC has a history of decisions that favor industry over ratepayers.

“Unfortunately, I think it’s going to be really bad news for Georgia ratepayers,” said Liz Coyle, the executive director of Georgia Watch. “If the Public Service Commission stays consistent, it is most likely that they will agree with the company that the additional costs will be borne by the ratepayers.”

In December, the PSC approved a cost increase of $2 billion, bringing the overall price tag for Plant Vogtle’s two new AP1000 units to about $8 billion. The increase approved in the settlement by the PSC was intended to protect ratepayers by putting Westinghouse into a fixed-price contract.

The agreement meant the contract company would complete construction without the negotiating power to pile on additional costs to trickle down to consumers. Continued cost overruns, however, paired with significant losses from the Westinghouse acquisition of CB&I subsidiary company Stone & Webster, put the company in a fiscal quagmire.

Echols said the settlement is clear and the PSC is a protection mechanism for the state’s ratepayers.

“Georgia law is clear that absent fraud, concealment, failure to disclose a material fact or criminal misconduct, any reasonable and prudent expenditure is eligible for recovery,” he said. “The commission has already determined that if the project is completed and works as designed, the costs incurred prior to Dec. 31, 2015, will not be disallowed on the basis of imprudence.”

After the approval, opponent group Southern Alliance for Clean Energy said, “Approval of the Vogtle settlement creates the largest rate impact for Georgia Power customers based on the least public review in PSC history. With today’s decision the Georgia Public Service commissioners have wrongly rewarded Georgia Power, its partners and shareholders and lead contractor Westinghouse for years of mistakes that will cost utility customers billions of additional dollars.”

Jacob Hawkins, spokesman for Georgia Power, said the company is monitoring the situation with Westinghouse and is prepared for any outcome.

With the announcement that Westinghouse will file for bankruptcy on March 31, Echols said the decisions for Vogtle are technically up to Georgia Power.

“However, because they (Georgia Power) want recovery from our ratepayers for the decision, they normally go to great extreme to get consensus at the PSC,” he said.

Said Coyle, “The cost incurred clause in the settlement agreement assumed the fixed-price contract would hold. The expectation now is that Westinghouse will seek to renegotiate the contract.

“I expect Georgia power will come back to the PSC because of the financial meltdown and say Westinghouse may not be able to absorb billions of dollars in construction overruns. If that is the case, Georgia Power will ask the PSC to determine that ratepayers should pay for those. And that’s our concern.”

According to Georgia Watch, the state Legislature authorized Georgia Power to construct Units 3 and 4 by collecting money up front instead of recovering costs through rate changes after the facility began to produce electricity.

“Going back years, we’ve raised concerns that (Georgia Power) customers are facing virtually all of the risks should cost overruns on the project materialize,” Coyle said.

As the project moves closer to its operational deadlines in 2019 and 2020 for the two units, it isn’t clear how those already adjusted dates might be affected. The two expansion units were originally scheduled to begin operations in 2016 and 2017.

Although the current deadlines remain in 2019 and 2020, they were recently moved back six months and three months, respectively. It is unclear whether the bankruptcy filings will result in a change of contractors or a construction stoppage.

In a recent construction monitoring report of Vogtle’s new units, expert witnesses said, “We conclude that the company has not demonstrated to staff that the current CODs (commercial operation dates) have a reasonable chance of being met.”

“It is my understanding that Georgia Power should be able to avoid a stoppage, but the situation is very fluid,” Echols said.

Hawkins, the Georgia Power spokesman, confirmed the utility’s commitment to holding Westinghouse responsible for agreements in the contract.

“Generally, while we cannot speculate on what may happen with their overall business, we will continue to hold Westinghouse (as well as their parent company Toshiba) accountable for their responsibilities under our agreement,” he said.

Once Westinghouse files the bankruptcy paperwork and Georgia Power begins to address the changing situation next Friday, details will begin to emerge. Until then, the PSC said, it is poised to protect ratepayers while consumer advocates continue to call on Georgia Power to shield the public from rate increases and take responsibility for project losses.