What Federal Pressure Could Mean For Title Loan Protection In Ga.

What Federal Pressure Could Mean For Title Loan Protection In Ga. 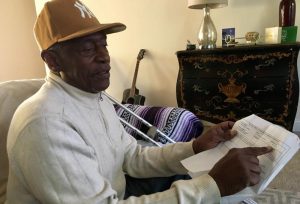 Ron Laster got a title loan to help with bills after an injury. He and his wife knew there would be interest. They didn’t know it was going to be 300 percent. Photo courtesy of WABE.

The year 2014 should have been a great one for Ron Laster. He and his wife had just bought a house.

Then he got injured. And that same year, his boss died. He’d been a touring musician with James Brown for 27 years. The Lasters called around to relatives for help as bills piled up, but the mortgage payments were too much. That’s when they saw a TV commercial.

“Georgia auto pawn, you know, where they advertise ‘get your cash right now. Cash! Help pay your bills.’ Blah blah blah. This and that, you know,” Laster said.

“Maybe we misheard it,” he said. “Maybe we should have paid a little more attention, but they were just so anxious for us to get the loan … we just went ahead and said ‘OK we need this money; we’re not going to lose this house’.”

Car title loan companies take in hundreds of millions of dollars from Georgians each year. Consumer advocates say it’s a predatory industry. They hope a federal rule, that’s been in the works since last year, will change that. But that plan may not survive the Trump administration.

“The car is the collateral,” Liz Coyle, with the consumer advocacy group, Georgia Watch, explained. “So if they don’t make the payments, the title lender takes their car, can charge them additional fees for having to repossess the car, can then sell the car.”

There’s also intense pressure from the lenders. Laster said on bad days he’d get as many as four calls from the company.

“Some of them were really nasty on the phone,” Laster said.  “Remind me of the old mob days — we’ll break your leg — or something like that. They just break your pocket instead of your leg. That’s what they do.”

His lender, Georgia Auto Loan, didn’t make anyone available for comment. There are more than 400 similar title lenders in Georgia. Consumer advocates estimate they make more than $199 million from borrowers in the state.

That’s despite the fact that Georgia actually has among the country’s strictest rules when it comes to another infamous lending product: Payday loans.

“The title lending industry is covered under a different section of law than payday lending. It’s the pawn browker act. So the user protections that are in place for something like payday lending don’t apply to title loans,” Coyle said.

She’s said she’s not saying no one should ever take out a title loan, just that the companies should have to be explicit about what it might actually cost in the long run. Georgia has among the country’s largest population of people who don’t use traditional banking services, more than one in 10, according to the Federal Deposit Insurance Corp.

Diane Standaert is with the Center for Responsible Lending. That group has gone undercover into lending offices and found employees often don’t offer up details about the length or cost of the loans.

Standaert said federal regulators have been working to change that.

“So in June of last year, the CFPB announced a proposed rule that has the potential to reign in the car title and payday lending debt trap,” she said.

The CFPB is the Consumer Finance Protection Bureau. The agency was created under the Dodd-Frank act as a response to the 2008 financial crisis.

The proposal would require lenders to make sure people are capable of paying back a loan without it cutting into other crucial expenses.

But the CFPB itself is under attack. Texas Republican Rep. Jeb Hensarling, who’s leading the charge, has argued the agency already has too much power.

“American consumers need competitive markets and a cop on the beat to protect them from fraud and deception, they don’t need Washington elites trampling on their freedom of choice and picking their financial products for them,” he said at a congressional oversight hearing of the CFPB last month.

He wants to remove the agency’s director, rein in its enforcement powers, and slash its budget.

So it’s an open question what could happen to this federal rule on title loans.

Meanwhile, Ron Laster keeps trying to pay down his debt. It’s something he said he’s been too ashamed to reveal to even close family members.

“It definitely feels embarrassing, especially since you lived that kind of life where you never had to worry about it then all the sudden – boom,” he said.

Recently, he managed to get some help. Another company took on his debt and let him start to pay it down without the high interest. Even then, it will have taken him more than three years just to get back to square one.