A Middle Georgia hospital is suing patients for unpaid bills

A Middle Georgia hospital is suing patients for unpaid bills 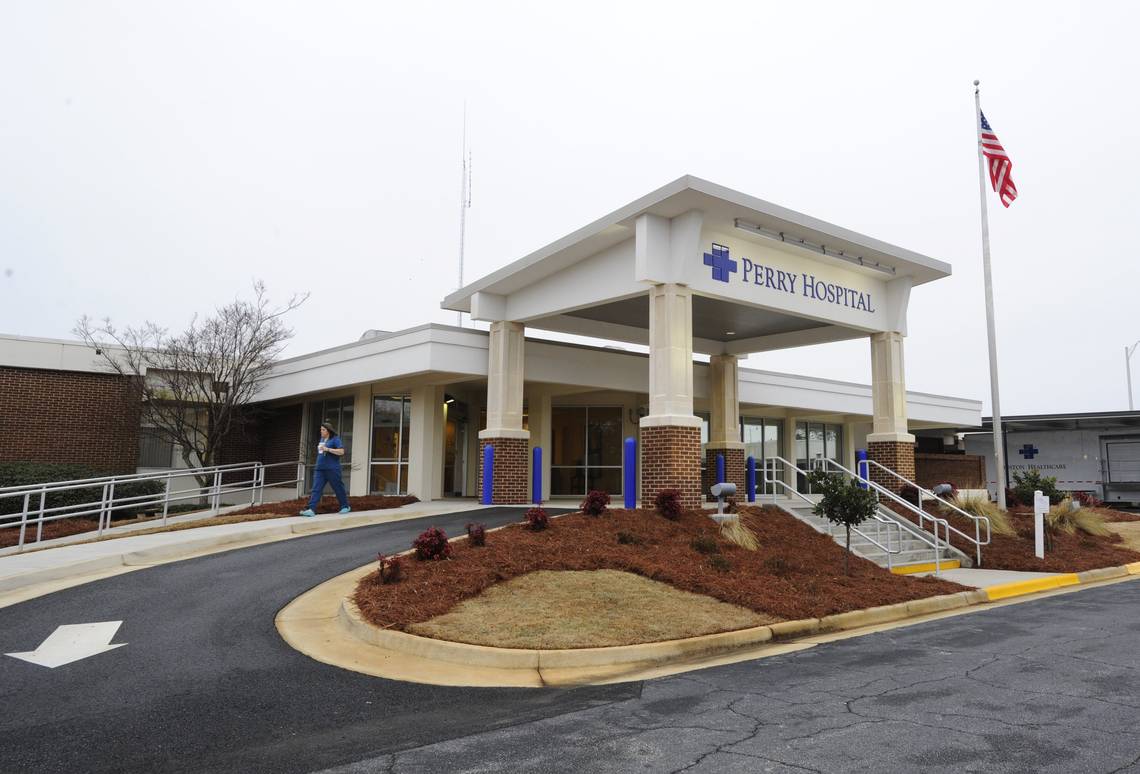 Photo courtesy of The Telegraph, 2018.

By Samantha Max – The Telegraph

The client told Carlson that an ambulance took him to the hospital for emergency treatment, and when he said he wouldn’t be able to pay, staff reassured him that his expenses would qualify for something called indigent care, Carlson said. Nonprofit hospitals like Houston Healthcare are legally required to provide free or reduced rate medical care for patients who can’t afford it on their own.

But after the client was discharged, two surprises came in the mail: a bill, and later, a lawsuit.

Since 2006, Houston Healthcare — which operates Houston Medical Center in Warner Robins and Perry Hospital — has filed at least 612 lawsuits in the Houston County Magistrate Court against patients who failed to pay their medical bills. Through these civil suits, Houston Healthcare has attempted to seize more than $1.3 million in patients’ wages.

Frier & Oulsnam PC is a law firm based out of Milledgeville that often represents the hospital system in debt collection cases. The firm declined to comment for this story.

For comparison, Coliseum Health System filed 50 garnishment lawsuits in Bibb County Magistrate Court during that time period, according to the magistrate court’s website. The latest lawsuit The Telegraph found was filed in 2014. Only one garnishment lawsuit brought by Navicent Health appeared in the docket.

Houston Healthcare filed about 30 garnishment cases between 2006 and 2012, but the number of lawsuits began to drastically increase in 2013. Hundreds of cases have made their way to magistrate court since.

Houston Healthcare Public Information Officer Kevin Rowley attributed the trend to an increase in expenses, a low reimbursement rate and an excess of bad debt. Bad debt occurs when hospitals do not receive the expected payment for services. This often occurs with indigent and uninsured patients.

Garnishing the wages of patients who haven’t paid their medical bills is a normal practice for a hospital, Rowley said, adding that Houston Healthcare does what it can to get paid for uncollected debt.

“Although we are a not-for-profit organization, we have to have revenue for the services we provide to continue providing services,” Rowley said. “So the reason for doing that is we need to exhaust every effort we can to get reimbursed for legitimate medical expenses. And that is one of the methods we might use.”

The IRS has taken steps in recent years to deter nonprofit hospitals from garnishing patients’ wages. In 2014, the federal agency amended its regulations for nonprofit hospitals and established several “extraordinary collection actions,” including wage garnishments, that should be avoided unless all other efforts to resolve a debt have failed.

Houston Healthcare bills patients after they are discharged from the hospital, and Rowley said patients are typically not informed how much tests or procedures will cost until after the fact.

“Ability to pay is looked at after care is rendered,” Rowley said. “We do not tell people that, ‘We think you need this test, but it costs a lot of money. Therefore, do you want it?’ We try to provide the best care possible, and the tests that are run are in the interest — in the opinion of the physician, the best things required for the patient’s well being.”

However, unexpected expenses can catch patients off guard. Patients might not question a medical professional’s decision in the moment, and it’s difficult to know which procedures are imperative and which are merely a precaution. But a visit to the hospital can run a steep cost.

“It really is a very disempowering situation to receive a medical bill that you know you just have no way of paying,” said Berneta Haynes, director of equity and access for the consumer protection organization Georgia Watch.

Houston Healthcare does provide financial assistance for patients who can’t afford part or all of their medical expenses. However, to qualify for aid, patients must complete an extensive application process.

Houston Healthcare accepts applications up to 240 days after the first billing statement is sent to a patient, according to the financial assistance application. The application calls for proof of income, monetary assets, proof of liabilities and various other documents that might provide further evidence of a patient’s inability to pay.

Uninsured patients with an estimated household income equal to or less than 125 percent of federal poverty guidelines receive “presumptive eligibility” for aid and are not required to pay for care, Houston Healthcare’s financial assistance policy states. A family of four would qualify if it earned $31,375 a year or less, according to 2018 poverty guidelines.

But when patients don’t take the necessary steps to apply, or if they don’t qualify for aid and still can’t manage to pay their bills, the hospital can take action to obtain what it’s owed.

Patients will first receive a bill within 45 days of discharge or one month of a recurring visit, according to the financial assistance policy. A second statement will then be issued 30 days after the first statement. A third will come 30 days after that.

If the bill still has not been paid within 90 days of the original notice, the policy states that the patient will receive another statement, which “will notify the patient their account will be reflected as a bad debt and referred to an outside collection agency if payment in full is not received within thirty (30) calendar days of the statement date.”

In some of the lawsuits brought by Houston Healthcare, the dispute was over only a few hundred dollars, an amount that could likely be paid back fairly quickly. In other cases, the unpaid medical costs exceeded $10,000, prompting the patients to file for bankruptcy.

For someone living paycheck to paycheck before a medical emergency, thousands of dollars in debt could take years to pay off.

Carlson, an attorney who represents clients in debt-related cases, said he’s been aware of this issue since he first got into practice about five years ago.

“Everyone coming in being sued by hospitals told me they were told they had indigent care,” Carlson said. “Obviously, there’s probably some people who are getting it and not getting sued, so I don’t see them. From my sample size, it’s everybody.”

That was about the same time that Houston Healthcare started ramping up its garnishment lawsuits, which coincided with a sudden drop in indigent and charity care.

Rowley said in an email to The Telegraph that the increase in garnishment cases since 2013 was not due to a cutback in indigent and charity care, but rather “an increasing number of patients failing to make arrangements to settle their accounts.”

Carlson, however, called the garnishment lawsuits an “easy win” for hospitals looking to supplement their income.

“It’s clearly money,” Carlson said. “They may not collect from 100 percent of people, but they’re going to collect from a lot of them. And once you get that garnishment in place, it’s just like clockwork. You just tell your attorney to file it again every six months, and that money just comes in. The court takes it for you, and you don’t have to do any work.”

Meanwhile, patients watch their incomes shrink, only digging them deeper into financial turmoil. Carlson compared it to a form of “modern-day slavery.”

“Any money you had to pay health insurance is gone. Forget it, because you’ve got to pay rent, which is, you know, $400 or $500 at best, and all the things that are required for you to live. That’s all you can pay for,” Carlson said. “So you don’t have health insurance now. The next time you go get health care, if you even go get health care, you’re gonna have to go to the hospital and generate another bill that you can’t pay. You’ll never be able to recover from that scenario.”

Rowley said the hospital’s priority is to provide the best care possible, regardless of the patient’s ability to pay. But when patients aren’t aware of all of their options, or of how much their visit might end up costing them, they can face an expense they’re unable to pay.

Haynes of Georgia Watch said people often don’t realize that their medical bills are negotiable, and that once they get treatment, they have options.

“There’s a lot of room for negotiation in terms of the cost of a particular service,” Haynes said. “And that’s why it’s so important for folks to be aware of their ability to negotiate.”

She said health care debt is one of the leading causes of bankruptcy, and her office often receives calls from people facing unexpected medical expenses and unsure of what to do. Even people with insurance can receive a surprise bill if they go to a health care provider outside of their insurance company’s network or are unaware of their deductible.

“So many of our medical debt calls are folks who just didn’t necessarily realize all the things they needed to do before making their doctor’s appointment,” she said.

But Haynes said there are steps people can take to avoid medical debt, regardless of whether a patient is insured. She and her colleague Beth Stephens created the Georgia Consumer Guide for Medical Bills and Debt, which provides helpful tips for people to follow both before and after their visit to the doctor or hospital.

“We really thought there was a need to just educate people a little bit more about how to actually protect themselves and better advocate for themselves when it comes to medical bills,” she said.

If you have a question about your medical bills, you can visit Georgia Watch’s website or call their hotline: 866-339-2824.