All Eyes on Equity: How nonprofits are mobilizing to solve Atlanta’s structural inequities

HomeIn the NewsAll Eyes on Equity: How nonprofits are...

All Eyes on Equity: How nonprofits are mobilizing to solve Atlanta’s structural inequities 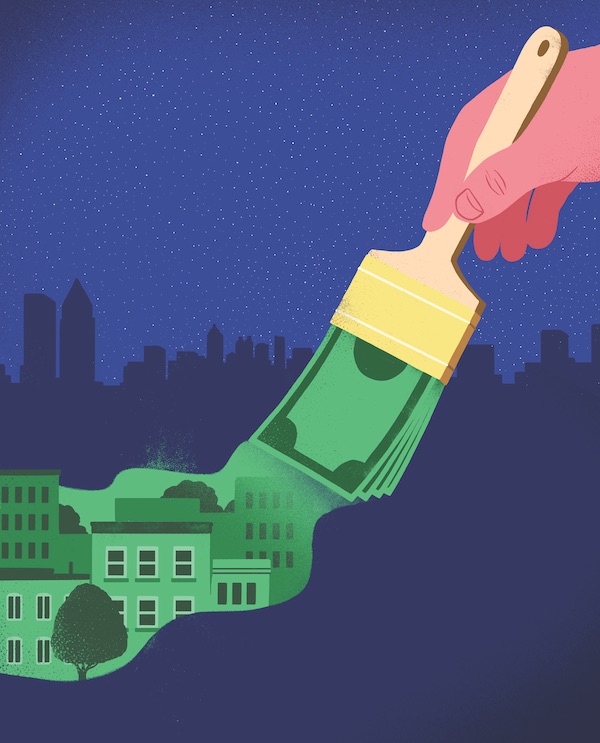 In Grove Park, a neighborhood just west of Bankhead, a familiar story is playing out. The first chapter might begin in the 1950s, when black Atlantans first started moving to the neighborhood and white residents tried various tactics—including bombing one black woman’s home—to keep them out. Next, when integration was inevitable, most white residents fled, and public disinvestment followed. Now, the neighborhood borders the under-construction Westside Park at Bellwood Quarry, soon to be Atlanta’s largest park, and home prices are rising—rents have grown by a third, according to Zillow’s median rent estimate. The middle-class, mostly black residents are at risk of being pushed out. But this time, the story might have a different ending.

That’s because this time the Grove Park Foundation, a nonprofit started in 2016, is helping revitalize the neighborhood holistically—and helping its current residents stay—with a team of neighbors and local partners. With the help of philanthropic and corporate sponsors like the Southern Company and Chick-fil-A, it has raised money to renovate a neighborhood elementary school, slated to open in 2020, which will also house a healthcare center. By partnering with the Atlanta Volunteer Lawyers Foundation and Atlanta Legal Aid, the foundation has helped neighborhood renters avoid unfair evictions. And with help from the Fox Theatre Institute, it will remodel a neighborhood theater, closed since 1969, into a community arts center. Debra Edelson, executive director of the foundation, says that in Atlanta—as nonprofits are putting equity front and center more than ever—the time was right. “People were ready to address these issues that hadn’t been talked about, to go look at what was behind the curtain—the poverty, the generations of disinvestment—and to stand up and say, ‘It’s time that we do something about this.’”

With its often-cited title as the “capital of income inequality,” Atlanta is approaching a crossroads. This year, Atlanta was named the fourth most gentrifying city in the country, according to the Federal Reserve Bank of Philadelphia. According to the Opportunity Atlas, a tool that tracks social mobility and analyzes outcomes across U.S. neighborhoods, children born on the south and west sides of Atlanta—where mostly black residents live—have a harder time escaping poverty. The unemployment rate for black Atlantans is nearly five times higher than for white people, according to a recent Annie E. Casey Foundation report, and black incomes here are only a third of what white people make. What’s more, Atlanta nonprofit giving hasn’t always been focused on equity: Between 2010 and 2014, the metro region had $453 in foundation funding per person—similar to that of the national per capita, but only 20 percent of Atlanta’s funding focused on underserved populations, according to a National Committee for Responsive Philanthropy report.

But across the city, organizations and funders have new momentum for solving Atlanta’s structural inequities, and they’re gaining more attention for work focused on systemic change, rather than solely on direct services. Since 2008, the Partnership for Southern Equity has advocated for moving from equality—giving everyone the same resources—to equity, or distributing resources based on the needs and circumstances of specific communities. Nathaniel Smith, the nonprofit’s CEO (chief equity officer) notes the shift comes from a moral calling, adding that “all people . . . want to make a difference and want to create more equitable conditions.” Smith notes that there’s also a more pragmatic perspective, a “business imperative” that’s emerged as demographic changes reshape our society and as the private sector wants to cultivate new workforces and reach new consumers. That also risks making equity into the city’s buzzword du jour. Smith comments, “You still have people that either don’t understand what it is, or, to be completely transparent, are trying to water down what it is to fit their own goals and aspirations.”

For Partnership for Southern Equity, keeping “equity” as more than a piece of fashionable jargon requires taking a comprehensive approach and building coalitions with people who have been left out of the conversation. While advocating for more affordable housing is a must, the nonprofit also focuses on spreading awareness of Atlanta’s high-energy burden: Atlanta ranks fourth in the county for how much residents spend on energy bills, and lower-income Atlantans are spending more than 10 percent of their incomes on heating, electricity, and transportation. With the support of groups like the MacArthur Foundation, the nonprofit has created the Just Energy Circle, a coalition-building effort that brings together technical experts, advocates, and community members and has connected organizations like Georgia Watch and the Fulton Atlanta Community Action Authority to bring energy-efficient appliances and light bulbs to residents. “Front-line organizations who have been focusing on equity are now at the same table as traditional environmental organizations,” Smith says. Communities impacted by rapid change are also at the table: Last year, the nonprofit launched a nine-month leadership development program, inviting residents in the fast-changing, BeltLine-adjacent neighborhoods of Pittsburgh, Summerhill, and Mechanicsville to learn about racial equity and gentrification and receive training in community organizing. Smith says that doing this work requires patient and sustained commitment. “The road to justice, and specifically racial justice, is built brick by brick,” he says. “Tectonic shifts rarely happen.”

These bricks are being laid in other sectors in the city as well. As food insecurity is projected to increase in areas like Atlanta’s outer suburbs, efforts have grown around offering healthier and more affordable options. For years, the Atlanta Community Food Bank, supported by public, private, and philanthropic sponsors, has distributed meals and groceries—nearly 70 million pounds in 2017—and has supported more than 100 community gardens. Newer initiatives like Gangstas to Growers—a program where formerly incarcerated Atlantans learn farming and entrepreneurial skills—are tackling broad yet interconnected issues simultaneously, and getting backing from the City of Atlanta.

The Kendeda Fund, which started in 1993 under philanthropist Diana Blank, has led the path for much of Atlanta’s giving directed toward equity, with a focus on community-driven solutions for issues like housing affordability and transit access. It has supported the Partnership for Southern Equity, the TransFormation Alliance—which advocates for racial equity in areas such as new developments along the Atlanta BeltLine—and dozens of other organizations. Tené Traylor, Kendeda’s Atlanta fund adviser, says she’s seen a change in how funders are approaching equity issues. “I think now there’s this push to say, ‘Well, what does that actually mean?’” she says, adding that foundations have to start looking at issues comprehensively—looking at the systemic issues underlying certain problems—and start becoming a little more experimental, questioning traditional ways of defining success. “I think a lot of foundations are asking themselves how they’ve been funding this work for so long, and yet the gaps are getting wider and the issues more pronounced,” Traylor explains. “Our city is shifting—what did we do to contribute to that, but more importantly, what can we do to reduce those gaps?”

Cross-sector partnerships have been pivotal toward closing those gaps. Nonprofit and philanthropic entities have worked together to align their strategies—and investments—around housing, government, and real estate. The HouseATL task force is an open-invitation group that aims to maximize dollars from philanthropic and private sources to create or preserve 20,000 affordable homes by 2026 under a plan adopted by Mayor Keisha Lance Bottoms, in partnership with local organizations and funders including ULI Atlanta, Enterprise Community Partners, the Arthur M. Blank Family Foundation, and Central Atlanta Progress. Those solutions are trying to focus on keeping equity for Atlanta’s longtime residents as their “North Star.” Traylor, who’s a member of the HouseATL executive team, notes the need to bring a variety of voices together to solve complex problems like housing inequities. “I think this whole conversation around equity is rooted in the way organizations are having to do their work differently, not just in strategy and tactics and evaluation, but in who’s at the table.”

In Grove Park, the lessons learned from holistic approaches might finally give a new ending to the old story of displacement. The Grove Park Foundation bought land across from the school, partnered with Columbia Residential, and received state low-income housing tax credits to create a 110-unit apartment complex, where at least 75 percent of its units will be affordable to people making around $30,000 per year. Executive Director Debra Edelson stresses the importance of tackling inequity through all of its components. “This is a disruptive model. You cannot break the cycle of poverty by just doing housing, or just education, or just doing after-school programs with kids,” Edelson says. “You need everything.” And everyone.