Over the past week, Jessica Silver-Greenberg and Michael Corkery of the New York Times published a three-part series entitled, Beware the Fine Print, on the effects of mandatory arbitration clauses on consumers. Each story illustrates the compelling case for reforms consumer advocates, like Georgia Watch, have proposed. These reforms would restrict the use of mandatory arbitration, which often prevents consumers from being part of class action suits, from holding bad actors accountable, and seeking redress through the courts.

Arbitration Everywhere, Stacking the Deck of Justice, the first in the series, gives a powerful overview of the interests of banks and other major corporations in using mandatory arbitration as a ‘means to an end’–preventing class action losses and driving cases away from the courts. The article also highlights the ever increasing prevalence of these clauses in every day contracts from phone applications and credit cards, to rental cars and cell phone contracts. It is becoming virtually impossible for consumers to avoid these clauses when shopping the marketplace. 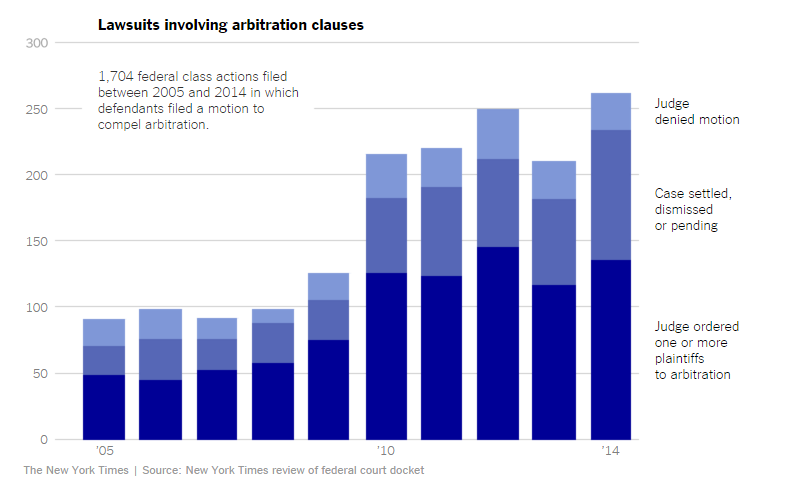 In the second article in the series, In Arbitration, a ‘Privatization of the Justice System’, the authors describe common issues found in arbitration, and how different the arbitration process is compared to seeking claims in civil court. “Little is known about arbitration because the proceedings are confidential and the federal government does not require cases to be reported. The secretive nature of the process makes it difficult to ascertain how fairly the proceedings are conducted.” With several major firms running arbitration proceedings for most corporations, there are many concerns about the objectivity of the arbiters selected, especially with the looming threat of losing business from the corporations who pay their salaries.

The last part of the series, In Religious Arbitration, Scripture Is the Rule of Law, Silver-Greenberg and Corkery highlight a surprising development in the use of mandatory arbitration by faith-based groups to avoid civil litigation. While some faith-based leaders believe that arbitration allows for religious groups to settle issues in accordance with the values of the religion, legal analysis demonstrates that the use of arbitration is likely more to do with “controlling legal outcomes” than respecting the values of the organization.

Introduced in April, 2015, the Arbitration Fairness Act of 2015 would ban the use of forced arbitration in cases concerning employment, consumer, antitrust, or civil rights dispute. Further, the law would allow the court the ability to determine the validity and enforceability of an agreement to arbitrate, under federal law, rather than solely by an arbitrator. This would give consumers necessary protections against the ever growing prevalence of forced arbitration clauses in the marketplace.

You can read the bill and see all sponsors here: https://www.congress.gov/bill/114th-congress/senate-bill/1133. Currently, there are no sponsors from Georgia or the southeastern United States.