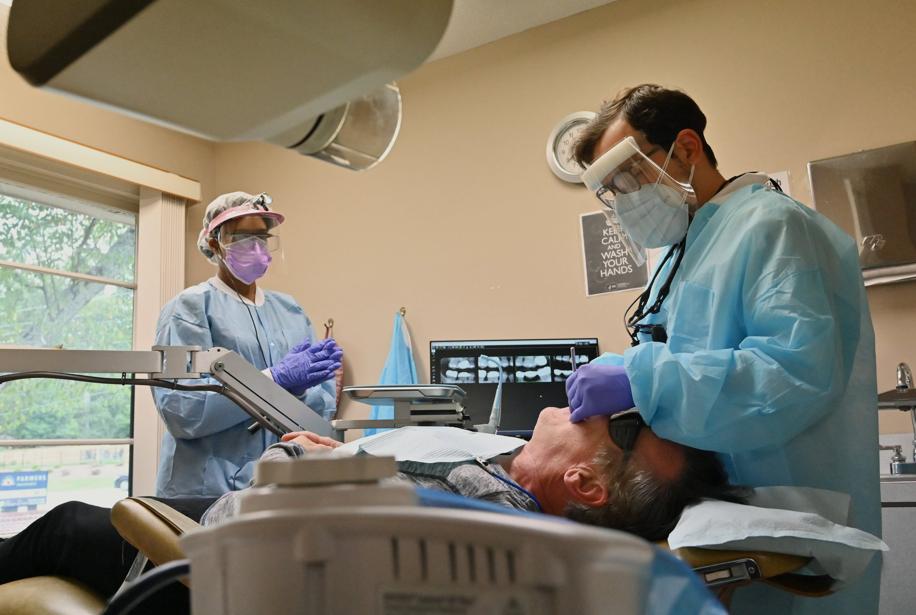 By Yamil Berard – The Atlanta Journal-Constitution

Some pass along costs to consumers while others turn to insurers, government for help

Having a family history of glaucoma, Liz Coyle was quick to schedule a visit to her eye doctor once coronavirus restrictions were lifted on some Georgia businesses. Around the same time, she wanted to catch up on her oral health by scheduling a visit to the dentist.

At each check-up, she was pleasantly surprised by what she saw – employees in masks, disposable gloves and isolation gowns; examination rooms sterilized between patients; chairs in waiting rooms roped-off to ensure social distancing; pumps of hand sanitizer everywhere.

What shocked her: A $40 fee tacked on to her dental bill.

“At the end of the day, I was, OK, fine,” said Coyle, who is executive director of the consumer advocacy group Georgia Watch. “But $40?”

It’s a new cost of doing business in the age of the coronavirus. As Georgia businesses attempt to recover from the financial shock of the pandemic and cover the skyrocketing prices of infection-control measures, consumers may be hit with additional fees or higher charges.

So far, the separate infection-control charges tend to be concentrated among health care providers.

Nancy Jones, a health care consultant, says some of her clients — particularly specialists such as cardiologists, surgeons and physicians who serve patients with chronic illnesses – also have raised fees to compensate for the costs of personal protective equipment.

“If you’re going in before your scheduled surgery and you’re going in for a consult meeting with a general surgeon in his office to talk about the process, you may be seeing a surcharge fee for PPE,” said Jones, senior consultant with Atlanta-based JW Healthcare Consultants.

Instead of imposing separate surcharges to help cover additional PPE costs, other businesses, such as hair salons, have hiked prices.

Merchants from big-box retailers and corporations to mom-and-pop shops have been hit with additional costs under the new infection-control standards. He doesn’t see fast food restaurants, mostly restricted by fixed price menus, as likely to adopt the fees. But a bowling alley might be able to convince customers to pay a little more.

“Most small businesses I’ve talked to haven’t had revenue for four months,’’ Clark said. “Now, they can reopen, but there are all these things that the government requires them to do.”

As they weigh the benefits of charging more, businesses are walking a tight rope with consumers, said James Cassel, an investment banker who handles mergers and acquisitions for companies across a broad spectrum of industries.

“Businesses are faced with – do they believe they have the pricing power on the one side, or simply do they have the customer base that understands it and is willing to pay a little more,” said Cassel, who is co-founder of the Florida-based Cassel Salpeter & Co.

Healthcare providers are struggling with that question already. Dentists say they were hit hardest because they were among the first to shut down. Now, patient volumes are still low, but their costs have shot up.

“All dental offices have been hit hard with huge costs that were unexpected,” said Florida dentist Keith Hutchinson, who is charging an extra $10 per appointment to try to offset the $60,000 he spent in recent weeks on office partitions, PPE, filtration systems and sanitation supplies. Hutchinson said he sees dozens of Georgia retirees and seasonal residents at his five clinics in the Tampa Bay area.

State Rep. Lee Hawkins, R-Gainesville, also a dentist, concurred that costs are becoming unmanageable for dentists. “Here’s the deal,’’ Hawkins said. “Our (shields) and masks do not last long. The burn rate is much faster on all this stuff, and the availability is still tough and that keeps prices very high.”

Still, Hawkins, whose son, Ben, is also a dentist, said their offices aren’t likely to charge fees. “I think most folks don’t like to see add-ons on their bills,’’ Hawkins said.

Dr. Andrew Reisman, a family care physician in Gainesville and the president of the Medical Association of Georgia, is sure his patients would be deterred. Many just can’t afford it.

“We are not charging for PPE,’’ Reisman said. “We probably should because it has been so expensive, but we don’t want to give patients yet another excuse not to come to the doctor’s office.”

Coyle said the fees will be a barrier to Georgians in critical need of essential services. “We are in the middle of a public health crisis,” she said, “it seems that we need to do more to make sure people don’t fall through the cracks.”

Rather than pass along higher costs, some cash-strapped businesses are looking elsewhere for financial help. Healthcare providers pushed the federal government for additional relief payments, and last week the Department of Health and Human Services announced it would distribute up to $15 billion to those with heavy Medicaid patient loads. In addition, HHS mentioned it was working on an additional allocation for dentists but provided no details.

Meanwhile, some business groups are pursuing other strategies.

The American Dental Association, for example, is asking that insurers and other third-party payers alter their fees to help cover the increased infection-control costs.

Insurance companies are also being asked to help cover losses through their business interruption policies. Insurers, though, have largely rejected the claims because the policies often don’t outline provisions for pandemics.

Such disputes are winding up in court. Around the country, restaurants have sued insurers for pandemic-related losses. And last month, Hartford, the insurer for many of Georgia’s 33,000 dentists, was served with a putative class-action lawsuit for failure to cover pandemic-related businesses losses.

Marietta attorney Roy Barnes, the former governor representing plaintiffs in the lawsuit, said he is likely to expand the suit to include other health care professionals who are teetering on insolvency because of the closures and the additional costs to meet infection-control standards.

“Here’s the deal. Our (shields) and masks do not last long. The burn rate is much faster on all this stuff, and the availability is still tough and that keeps prices very high.” —State Rep. Lee Hawkins, R-Gainesville, who is also a dentist

“There’s no question that this virus has affected a broad spectrum of businesses,” Barnes told the AJC.

Dr. Roy Johnson, the lead plaintiff in the suit, said he was lucky to qualify for the Paycheck Protection Program under the federal relief package, which delivered $100,000 in loans to ensure that the 11-member staff at his Smyrna dental office remained employed.

However, healthcare providers with a heavy debt burden and significant overhead before the pandemic hit will be severely strained, he said. “It’s been very hard,” Johnson, who has practiced dentistry for more than four decades. “There are going to be some dentists who have a lot of trouble.”

Among them is Dr. Robert Lee, who said he is struggling to survive as the only dentist in nine counties in one of the poorest corners of southern Georgia.

“Our fees are the lowest in the country,’’ Lee said. “And now they are being eaten up by PPE.”