In 2012, the Consumer Financial Protection Bureau (CFPB) began investigating the prevalence and impact of mandatory arbitration clauses on consumers in the financial services market. Last week, the CFPB released their findings from three years of investigation. The report highlights that consumers are often unaware when they sign contracts with mandatory arbitration clauses included.  Investigators also found no evidence to prove that arbitration was less costly for consumers, as had been previously cited by corporations hoping to push through arbitration as the dominant method for handling consumer disputes.

Overall, the study provided evidence that the over 80 million consumers who are subject to mandatory arbitration agreements would likely be blocked from the ability to participate in a class action law suit. For example, the study found that while only 8% of banks have mandatory arbitration clauses, those 8% cover around 44% of all insured deposits in the country. For checking accounts alone, class action settlements over three years totaled over $600 million for at least 19 million consumers. Any consumer who was subject to a mandatory arbitration agreement would have been blocked from participating in that settlement.

In fact, the CFPB report states that credit card issuers invoked arbitration clauses 65% of the time when sued in a civil case. 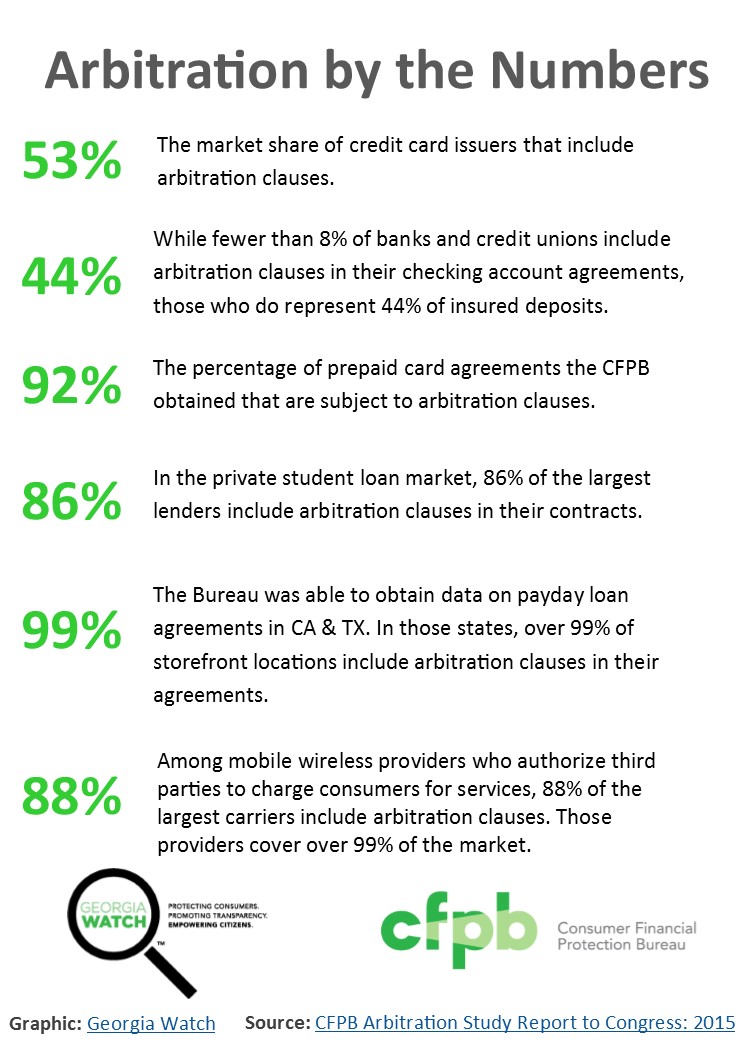 Of greatest concern, 75% of the consumers surveyed in the study did not know whether they were subject to mandatory arbitration clauses. Moreover, less than 7% of those consumers understood that a mandatory arbitration agreement would restrict their ability to sue a service provider in court. Georgia Watch is working across the state to provide education to consumers about their rights, pathways to self-advocacy and what prominent issues affect consumers here in Georgia. Our presentations often discuss the need to look out for arbitration clauses in all contracts and encourage consumers to negotiate the terms of any contract to ensure they will have access to the courts should anything go wrong. See our resource on Understanding Mandatory Arbitration in Georgia.

Georgia Watch and other consumer advocacy groups praise the CFPB’s efforts to shine a light on this important consumer issue. “This is the first step in what we hope will become both strong rule-making from the CFPB and enhanced community outreach from local advocates on mandatory arbitration,” says Georgia Watch Director of Community Education, Elise Blasingame. “Consumers should not be forced into signing a document which leaves them with no alternatives in the marketplace. This is especially true when financial services or other products that affect livelihood are at stake.”