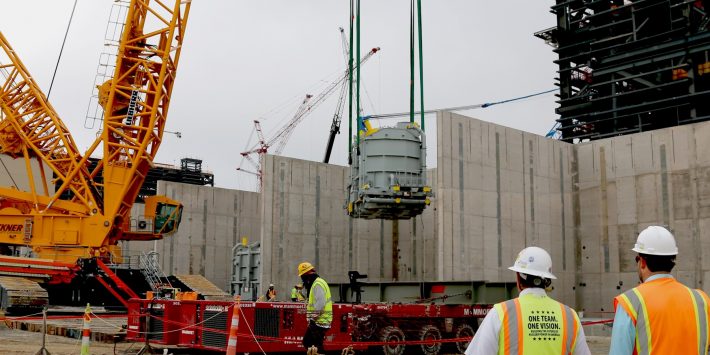 After days of negotiations, the four companies involved in the Plant Vogtle nuclear power expansion have voted to continue. The fate of the project had been up in the air after more than $2 billion in additional costs were announced last month.

“We are all pleased to have reached an agreement and to be moving forward with the construction of Vogtle Units 3 & 4 which is critical to Georgia’s energy future,” the companies said in a statement. “While there have been and will be challenges throughout this process, we remain committed to a constructive relationship with each other and are focused on reducing project risk and fulfilling our commitment to our customers.”

Georgia Power will take on more financial risk with the deal. If the project price continues to grow, the company will absorb a larger proportion of the costs. Georgia Power also stands to benefit if the project comes in under the current budget.

Oglethorpe had initially asked for a cap on the cost of the project, but did not get that as part of the agreement.

“Would we of rather not had Southern take on additional risk? Yes, but they had to due to the situation with Oglethorpe,” said Charles Fishman, an analyst at the market research firm Morningstar who focuses on Georgia Power’s parent company, Southern Company.

Oglethorpe, MEAG and Dalton also have a one-time chance to get out of the project if costs go up by more than $2.1 billion. Georgia Power would have the option to take over that company’s costs or cancel the project.

At certain thresholds, Georgia Power agreed to “kick in some money to ease the financial pain for those other participants,” said Kurt Ebersbach, senior attorney at the Southern Environmental Law Center. “But, the overall amount of that can’t exceed roughly $180 million, which in the terms of this project, is a very minimal amount.”

Ebersbach said another important update in the agreement was that if construction costs rise unexpectedly, that will no longer trigger a vote, like those this past week. “Oglethorpe and MEAG gave up their right to get out of the project if further billion dollar increases come about, which it’s likely they will,” he said. “In exchange, they’re getting some limited financial assistance from Georgia Power but I would argue that assistance is not nearly enough to compensate for what they’ve given up.”

“Georgia Power is now able to drag them along until the bitter end no matter what the cost of this project, and that should be of great concern to the communities served by those utilities,” Ebersbach said.

Dan Aschenbach is a senior vice president with Moody’s Investor Services and covers MEAG. He said at this point, MEAG ratepayers in its 49 member communities shouldn’t see cost increases due to the Vogtle project. If construction costs continue to go over-budget, though, he said, that could change.

“What could cause a higher rate, is if there are cost increases for the project beyond [the most recent one],” he said. He pointed out that there has been progress on the project, that it’s about 56 percent complete, but added, “again, there could be unanticipated cost increases.”

“I think it’s very much a Georgia Power win,” he said.

The negotiations and votes were triggered last month, after Southern Company, the parent of Georgia Power, announced costs had gone up by another $2.3 billion, bringing the total cost of the project to at least $25 billion, about double what was originally expected.

Georgia Power customers pay for that company’s portion of the financing on their monthly utility bills, and will eventually take on capital costs as well once the two nuclear units are complete. But the company’s shareholders will absorb its portion of the latest increase, about $1.1 billion. The other companies involved in the project, Oglethorpe Power Corporation, MEAG, and the City of Dalton, don’t have shareholders, so price increases are passed on to their customers.“Every ratepayer in Georgia, one way or another, is going to be paying to continue what obviously is a very risky project,” said Liz Coyle, director of the consumer advocacy group Georgia Watch.

Last week, a bipartisan group of 20 Georgia legislators sent a letter to the companies, expressing concern about the rising costs and lack of a cap. “Our local utilities don’t have the luxury of shareholders to absorb these additional costs and will have to increase rates even higher,” they wrote. “This approach is unfair and anti-competitive.”

A Florida utility, JEA in Jacksonville, has also spoken out against Vogtle and its rising costs. It buys power from MEAG, and filed suit against that company to get out of its contract.

Governor Nathan Deal, had encouraged the companies to continue the project, and sent a statement saying he commended them once they’d announced their deal. “This project will ensure that Georgia citizens have a long-term, affordable and sustainable energy source, while also creating thousands of jobs,” Deal said in the statement. “I look forward to the completion of Plant Vogtle Units 3 & 4 and its continued impact on our economy and infrastructure.”

The fate of Plant Vogtle had been up in the air for much of last year, too, after the lead contractor on the project went bankrupt. Westinghouse blamed the bankruptcy on the high costs at Vogtle and another nuclear power project in South Carolina. After Southern Company subsidiaries Georgia Power and Southern Nuclear took the project over, the Georgia Public Service Commission voted in December to keep the project going.

The two nuclear reactors at Plant Vogtle became the only ones under construction in the nation after the South Carolina project was cancelled last year.