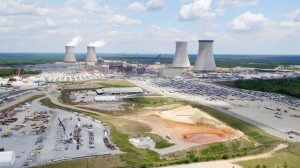 ATLANTA — Consumer advocates argued yesterday that a proposed agreement around the costs of Georgia Power’s nuclear expansion project lets the company off the hook if deadlines aren’t met and the reactors don’t start operating on time.

The criticism was heightened because independent project analysts again raised issues in a hearing last week that Plant Vogtle units 3 and 4 would not be finished by the end of 2020. This is despite Georgia Power executives testifying to the contrary.

The cost of Georgia Power’s share of Plant Vogtle is roughly 30 percent higher than when the project started. The utility and Public Service Commission staff recently reached an agreement on how to handle those costs. It includes the utility absorbing an amount through a lower rate of return on equity, but consumers would shoulder the rest.

Georgia Power’s return on equity (ROE) will also take a hit if both reactors are not producing electricity by the end of 2020. PSC staff argues that settlement critics are overlooking this key component.

At a routine PSC meeting, consumer advocates acknowledged the work that went into getting an agreement but argued it’s not enough to protect customers from additional rate increases.

“My biggest concern … is that staff was forced to compromise so much on this question of imprudence just to get a risk-sharing mechanism,” said Liz Coyle, executive director of Georgia Watch.

Coyle said she does not believe both reactors will be producing electricity by the end of 2020, something that would have financial ripple effects in the form of lost production tax credits and bonus depreciation.

The agreement gives the commission the right to review costs on any system or structure that doesn’t perform or meet design standards and federal nuclear safety requirements, or that delays the project beyond the 2020 deadline.

“This stipulation does not yet adequately balance the interests of the company’s ratepayers and customers with the interest of their shareholders,” she said.

Bobby Baker, an attorney representing the Southern Alliance for Clean Energy, argued that even with that, the agreement will have a negative impact on any prudency review done in the future.

Commissioner Tim Echols asked Baker whether his opinion of the settlement would change if he knew that the reactors were going to fall further behind.

“We know it’s going to go further than the 39 months,” said Baker, referring to how far behind units 3 and 4 are now.

Georgia Power executives have repeatedly said it has assurances from the contractor, Westinghouse Electric Co. LLC, that the project will meet the December 2020 date. Both companies face financial consequences otherwise.

“This was a thorough sifting and detailed review” of Vogtle’s costs, he said.