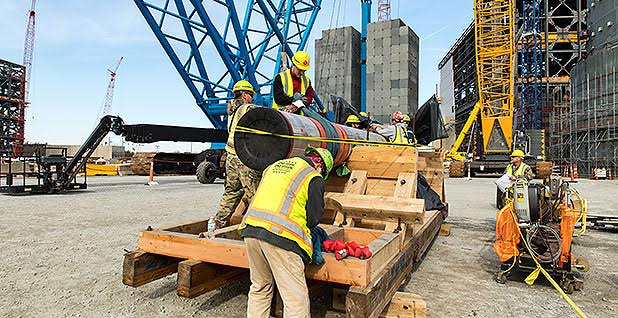 The vote yesterday by the Georgia Public Service Commission denied a request by consumer group Georgia Watch, which argued the commission approved new financial requirements for Georgia Power Co.’s Plant Vogtle expansion without knowing the full impact on the company and its customers.

The utilities and the PSC argue that the reactors will put emission-free baseload electricity on the grid and hedge against rising natural gas prices and any future carbon legislation, should either happen. Vogtle’s main challenge, however, is the one that has plagued the entire nuclear industry: cost.

The reactors started with a $14 billion price tag, and Georgia Power’s 45.7 percent share of that was $6.1 billion. The costs have roughly doubled two years later. A $3.7 billion write-down from Westinghouse’s parent, Toshiba Corp., has lowered the amount to roughly $23.4 billion.

The commission vetted the project’s economics from the utility, the PSC staff, and a wide variety of consumer and environmental advocates in a series of hearings last fall. Other factors such as demand and fuel diversity came into play as well.

Georgia Power has maintained that the project is in the best interest of its customers because the reactors will be producing electricity for decades once they’re finished. The PSC staff said commissioners should have Georgia Power and Southern’s shareholders absorb the billions of dollars in cost increases or else stop building.

The five-member Georgia PSC signed off on new conditions that, among other things, chisel away at the amount that Georgia Power can earn from the reactors at Plant Vogtle. A number of those changes had not been vetted in hearings held just months before.

This includes approving a 5-megawatt solar array at the site and allowing Georgia Power to bill customers for Vogtle’s Unit 3 reactor once it starts producing electricity.

“We have 5 megawatts of solar approved in Burke County, and you’re telling me that Georgia Watch, on behalf of consumers, on behalf of low-income consumers, wants to pull back across the board,” Echols said.

The issue was never about solar or even nuclear, for that matter. It was about cost and procedure, Liz Coyle, Georgia Watch’s executive director, said after the short hearing.

“We have always supported expansion of renewable energy and community solar,” she said. “What we said was that it was completely out of left field. And it should be a bid project.”

The second key issue was that the PSC signed off on Georgia Power’s request to recoup the capital costs of Unit 3 before finishing Unit 4. While this is a typical process of building two-unit power plants, it undoes part of a previously approved agreement by commissioners the year before.

The commission has the authority to make changes to such types of agreements, but a separate August document about Vogtle says that this settlement will remain in place.

“After this hearing, the Prudency Review Stipulation will still be in effect, including, but not limited to … the provision that neither Unit can go into rate base until the later of December 31, 2020, or when both Units reach Commercial Operation will remain in effect,” the document says.

There is debate over whether Georgia Power will profit more from this change. The PSC’s utilities director has said in emails that the company will. Georgia Power disagrees, arguing that those calculations were made before the PSC’s December vote, which includes more cuts to what the utility can earn from Vogtle.

Georgia Power and Echols also negotiated the terms that went into the PSC’s motion beforehand, which it was allowed to do in this case.

“I’m even more convinced now that this motion for reconsideration merely asks you to change your decision because Georgia Watch disagrees with it,” Greene said.

Coyle said she expected such a comment and is sticking with her concern that the project lacks a full economic analysis now.

“What they ordered has a real impact on ratepayers, on the customers of Georgia Power,” she said. “We still have not seen any analysis on what the actual cost will be to ratepayers and how much more the company’s shareholders will profit off of that decision.”

Georgia Power spokesman Jacob Hawkins said the utility expects to include an updated projected effect on customer bills in its next Vogtle cost-and-schedule report, which is due later this month. Southern Co. also may include information about the effect to shareholders as part of its quarterly earnings report as well.