Contractor Bankruptcy Could Be Trouble For Georgia Power

HomeEnergy and UtilitiesContractor Bankruptcy Could Be Trouble For...

Contractor Bankruptcy Could Be Trouble For Georgia Power 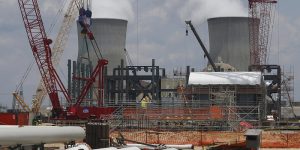 The company that’s building two new nuclear reactors in Georgia is reportedly heading for bankruptcy. And that could mean trouble for Georgia Power, whose new units at Plant Vogtle are already behind schedule and over budget.

Westinghouse, the contractor building the two new nuclear units, could file for bankruptcy as early as next week. The units at Plant Vogtle, near Augusta, and others in South Carolina are the first new nuclear reactors being built in the United States in decades.

If Westinghouse goes under, Georgia Power customers could end up taking on more of the costs to build Vogtle, said Liz Coyle, executive director of the consumer advocacy group, Georgia Watch.

“If Westinghouse is no longer required to essentially eat those overruns, Georgia Power will no doubt go before the Georgia Public Service Commission and ask the commission to determine that those costs should be borne by Georgia Power customers,” Coyle said.

Stan Wise, chairman of the Public Service Commission, agreed that that is a possible outcome. Another, he said, is that Plant Vogtle just doesn’t get finished at all.

“It’s a real hit and a real blow to something that we felt like was going to be the very best possible energy choice for Georgia maybe even into the next century,” he said.

The energy landscape has changed since the Vogtle plan was initially approved, with natural gas getting very cheap, and technologies like solar power and batteries improving.

“If I’d known any of this a decade ago we would have gone a different way,” Wise said.

In late 2016, the PSC approved a deal with Georgia Power that lowered the company’s return on equity and approved the company’s construction costs through 2015, meaning they could be passed on to customers. As part of the deal, the deadline to complete the project moved back to 2020. One of the reactors had originally been scheduled to be online by now.

“While we cannot speculate on what may happen with their overall business, we will continue to hold Westinghouse and Toshiba accountable for their responsibilities under our agreement,” a Georgia Power spokesman said. “Work continues to progress at the Vogtle site. We are monitoring the situation with Westinghouse and prepared for any potential outcome.”

Wise said what’s happening here could be a setback for new nuclear development around the country.

“Having been a cheerleader of the next generation of nuclear power, it puts me in a very uncomfortable spot as to what to do,” he said.