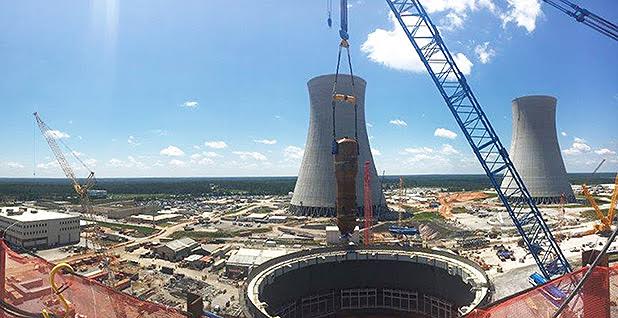 ATLANTA — A bill that would end the controversial financing law that’s being used to expand Plant Vogtle passed the Georgia Senate yesterday.

The measure would apply only to future nuclear reactors and would not affect Georgia Power Co.’s Plant Vogtle expansion project. Still, while the proposal (S.B. 355) does no immediate financial harm to Georgia Power, a unit of energy giant Southern Co., it carries major political significance.

Georgia Power is a political heavyweight at the state Capitol. The utility had roughly six dozen lobbyists help move the Georgia Nuclear Energy Financing Act through the Legislature in 2009, allowing the electric company to bill customers for Vogtle’s reactors as they were being built.

At the time, Georgia Power and nuclear supporters argued that doing so would pay down interest costs and save customers money over time. It would also send a signal to Wall Street that the Peach State stood behind Georgia Power building the nation’s first nuclear project from scratch in nearly 30 years.

Vogtle is now the lone nuclear project under construction in the U.S. It is years behind schedule and billions above its forecast budget. The financing costs have now roughly doubled, causing many to question whether the Legislature needed to review the 2009 law.

“If you had asked me at the beginning of the session if any legislation would move in this area, I’d say, ‘Absolutely not,'” said state Sen. Josh McKoon, a Republican from Columbus. “It’s one thing to stir up a hornet’s nest. It’s another to constructively engage Georgia Power, the other players, to come up with something that moves public policy in a direction that [the bill’s sponsor] and I think it should be moving in.”

McKoon, who is running for Georgia secretary of state, was an early co-sponsor of legislation from state Sen. Chuck Hufstetler, who wanted to limit how much Georgia Power could profit from Vogtle’s reactors (Energywire, Jan. 25).

Hufstetler, a Republican from northern Georgia, said he partly was motivated to change the state’s nuclear financing law after Georgia Power was able to recoup millions of dollars it used to explore whether a site in west Georgia would be suitable for nuclear reactors after 2030.

Hufstetler had widespread support for his original bill but narrowed it to sunset the 2009 nuclear law after reaching an agreement with others in the Senate. This included state Sen. Frank Ginn (R), chairman of the Senate Regulated Industries and Utilities Committee.

Ginn said he and Hufstetler met with Georgia Power executives to talk about the bill earlier this month.

“When you think about the original legislation that was passed, it was probably more to get buy-in from all across the state and get Vogtle support from Georgia Legislature instead of just leaving it to the Public Service Commission,” Ginn said.

The bill sailed through his committee and the Rules Committee without incident (Energywire, Feb. 16), and was placed on the calendar for a floor vote yesterday. This week is critical in the Georgia Legislature; bills must pass their respective chambers by tomorrow night to remain viable for the rest of the legislative session.

The Senate voted to not add any amendments to this bill and a few others at the start of yesterday’s session. The Senate minority leader disagreed with the move, saying there should be opportunities to improve the bills on the floor, but Hufstetler told E&E News that leaving the measure as it was would be critical for its future.

“Quite a few of us came to an agreement on what we can pass this year,” he said. “It’s important to me to keep that agreement and that the bill move forward.”