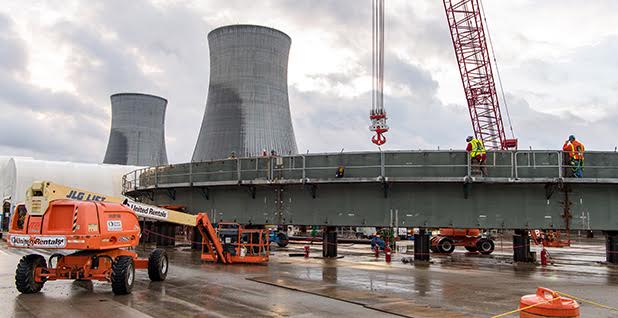 The measure is a pared-down version of a bill (S.B. 355) that would limit how much Georgia Power could profit from Vogtle, whose reactors are years behind schedule and billions of dollars above their original forecast budget. Georgia Power — known for its political muscle at the Capitol — did not oppose the new version passed yesterday.

Consumer advocates also did not testify but said after the meeting they hoped this measure would open the door for future inquiries by the Legislature.

“We remain hopeful that the Legislature will continue to look at the issues, and as they dig deeper, they will realize that we need to do something more,” Liz Coyle, executive director of Georgia Watch, said in an interview after yesterday’s Georgia Senate Regulated Industries and Utilities Committee hearing. “At least we can say that something has gotten done where the Legislature is acknowledging that we can’t just keep this going unchecked.”

Georgia Power and a group of public power utilities are building twin reactors at Vogtle, now the nation’s lone nuclear project under construction. They, as well as state utility regulators, argue that the reactors will put emission-free baseload electricity generation on the grid for decades.

Vogtle had plenty of political support in 2009 when the Legislature swiftly passed the Nuclear Energy Financing Act. Supporters argued that customers would save money over time if they paid for the reactors’ financing costs as they were being built.

The law also sent a signal to Wall Street that the nuclear reactors had political support and, more importantly, a steady revenue and profit stream for Georgia Power.

Those financing costs have roughly doubled now that the reactors are five years behind schedule, causing many to question whether the law should be reviewed. Indeed, S.B. 355 allows for any nuclear plant approved before Jan. 1, 2018, to fall under current law, but any proposed project would not get the same financing treatment.

This means the measure does little harm to Georgia Power because it keeps Vogtle’s current financing mechanism in place. What’s more, the idea of building another baseload nuclear power plant anywhere in the United States is unlikely for a number of reasons: Demand remains flat; natural gas prices are low; and in some places electric companies are looking to combinations of solar, wind and storage to provide generation.

The South Carolina utilities walked away from their project at V.C. Summer after deciding the reactors would be too expensive for customers to pay for. Their decision caused widespread political backlash that has dominated much of the South Carolina Legislature’s current session.

Georgia Power downplayed the new legislation. Had the utility even remotely been considering building more baseload nuclear, the company likely would have had a different response.

“While we don’t believe new legislation is necessary, we welcome the opportunity to be a part of the conversation if the Georgia legislature decides to move forward with discussions to revise the Georgia Nuclear Financing Act,” company spokesman Jacob Hawkins said in a statement.

That being said, it is extremely rare for a group of Georgia’s elected officials to do anything that could be viewed politically as going against the state’s largest electric company, much less during a major election year.

“We actually see this as a big victory,” Coyle said. “Sometimes the legislative process moves smoothly when everybody’s in alignment of what’s going to happen. And that’s what we saw today.”

Lobbyists’ reports from January and February show a number of Georgia Power representatives paying for state lawmakers’ meals, something that is a routine part of business at capitols here and elsewhere. Among those included in those meals are the bill’s sponsor and bipartisan co-sponsors as well as the Rules Committee chairman, according to disclosures filed with the Georgia Government Transparency and Campaign Finance Commission.

State Sen. Chuck Hufstetler, a Republican from northern Georgia, said he partly was motivated to change the state’s nuclear financing law after Georgia Power was able to recoup millions of dollars associated with exploring whether a site in west Georgia would be suitable for nuclear reactors after 2030.

“I feel like the first step is to make sure that anything that happens in the future has to come back to the Legislature, and let’s discuss the financing method,” he told reporters.

The bill must pass the Rules Committee, which dictates which legislation goes to the floor for a vote. The measure then must pass the Senate by the 28th day of the legislative session, which happens to fall on Feb. 28.

Hufstetler secured widespread support for the original version of his bill, but its chances of getting out of the Rules Committee — if it even got there — were slim. He is more optimistic about this version’s chances.