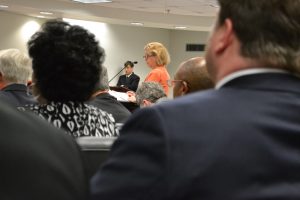 ATLANTA, GA- More than 40 years have passed since the beginning of the 12-year construction of Plant Vogtle nuclear units 1 and 2 near Waynesboro, GA, and some concerned citizens said they can’t believe they are still protesting.

Construction on Vogtle expansion units 3 and 4 began in 2009, at a time industry experts called the nuclear renaissance. The new nuclear units were originally slated to come online in 2016. Thursday, a year beyond deadline, the Public Service Commission heard testimony about construction delays, bankruptcy woes, and an unfinished plan to complete construction.

Westinghouse, the contract company that was building the AP1000 reactors, filed bankruptcy in March, spinning Vogtle into a vortex of uncertainty. The project is owned by several Georgia utility companies with primary ownership under the banner of Georgia Power, subsidiary of Southern Company.
By early June, Southern Company agreed to take over project management from defunct Westinghouse. In testimony Thursday, Southern Nuclear representatives told the PSC they have preliminary data that suggests productivity is up since the company took over. But some consumer advocacy groups aren’t convinced.
“Every time the project changed hands and a new contractor took over, the company testified that things were getting so much better,” said Liz Coyle, executive director of Georgia Watch. “Every time they tried to convince us that this was the time things were going to start going smoothly. We are still waiting.”

In his testimony, PSC staffer Steve Roetger said the bankruptcy and current circumstances weren’t entirely unexpected. “We didn’t trust the company. We never felt they had a reasonable, fully integrated IPS [integrated project schedule]. We were driven to negotiate a deal where we forfeited the right to litigate to provide significant protections on the back end,” he said.

Since 2009, Georgia Power has been collecting a nuclear tariff from customers valued at 7 percent of their monthly bill. That tariff, authorized by the state legislature as “construction work in progress” costs allows the company to collect construction costs up front, before a single kilowatt-hour is produced by units 3 or 4.

That tariff isn’t just levied against residential and business customers, though. Nuclear construction costs are also collected from public schools, municipal governments, non-profits, and religious establishments like churches and mosques. Thursday’s hearing drew a number of concerned citizens to speak out against the plant.

“The reports read more like a script for a theater of the absurd, where the expenditure of billions of more dollars on a failed experiment is called a deal for the ratepayers,” said Georgia Power customer Barbara Antonoplos. “In the face of all this, the company emphatically maintains that the project is well managed. Despite warning after warning, the PSC still says ‘nobody could have seen this coming.’”

The PSC will hold elections for two of its districts in 2018. John Noel, former Georgia legislator and Atlanta based energy efficiency businessman, recently announced candidacy for the District 3 seat currently held by Commissioner Chuck Eaton. Noel, who has expressed concerned over Voglte’s construction progress, also spoke to the commission. “With the landscape we are in right now, this is a time for us to be thinking Things are getting more and more efficient; buildings and lights. And it can all be done for pennies on the dollar compared to what we are spending now for units 3 and 4. As good stewards of environment, economy and personal finances, we should be focusing on how to better use the energy we have. As the Public Service Commission it is your duty to protect the ratepayers,” Noel said.

According to testimony, Vogtle is only about 40 percent complete, including engineering and procurement; construction progress is lower. The roughly $4 billion price tag at current is comparable to the original cost estimates to completion. With more than half of the project remaining and eight years already underway, some say the finish line is an indistinct concept years down the road.

“It’s impossible to know when the company will finish 3 and 4,” Coyle said. “Until they have a completed IPS, it’s just a guess. Now that Southern Nuclear has taken over, we don’t really know what will happen. They’ve only ever finished one nuclear construction project; Vogtle 1 and 2. That took 12 years to finish, was built over 30 years ago, and was way over budget. Cost overruns then were passed on to the consumers, just like they are now.”

Georgia Power did not respond to telephone or email inquiries regarding this week’s hearing and testimony.