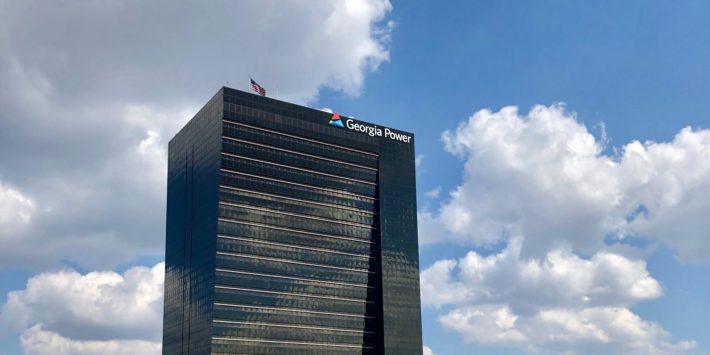 Wykeisha Howe said she knows how to be thrifty.

“I try my best to manage and ration out things as best as possible,” she said.

During Atlanta’s sweltering summers, the mom of eight doesn’t turn the AC down too much and runs a fan. She’ll try to cook both lunch and dinner as one big meal so she doesn’t have to turn on her electric stove twice. She gives her kids freeze pops or sends them out for ice cream to help them cool off.

But still, she said, she’s about a month and a half behind on her Georgia Power bill.

In the early weeks of the pandemic in the U.S., as shelter-in-place orders went into effect, utilities around the country, including many in Georgia, announced moratoriums on disconnections. But many of those moratoriums are now being lifted, even as the pandemic rages on and the hottest days of the summer are upon us. Georgia Power’s moratorium ended on July 15.

‘So Much Need’ In Georgia

By the end of the moratorium, close to 97,000 Georgia Power customers were two months or more behind on bills.

Anyone who is medically fragile can tell Georgia Power, and they won’t be disconnected during Georgia’s public health state of emergency. The utility has a payment plan so people like Howe can catch up on their bills over time beginning later in the year. There’s also a federal low-income energy bill assistance program and nonprofits that help with bills, too.

“The system is overwhelmed, even though people are working around the clock to try to help people,” Coyle said. “There’s just so much need right now in the state.”

In many cases, the organizations that offer help on utilities are also trying to help people get food on the table and pay their rent. Since there have been moratoriums in place on utility bills, those other things have been higher priorities for people, said Michael J. Bradford, director of the Project SHARE program at the Georgia division of the Salvation Army.

“We are just beginning to see the tip of the iceberg of what the demand is out there and the unmet need as far as utility assistance is concerned,” Bradford said.

The Salvation Army program collects donations from utility customers as an add-on on their bills. Georgia Power matches the donations and adds another 50% on top.

Bradford said in his 25 years of directing the program, demand for help has always outstripped funding. This year, Georgia Power began giving more to the program, but Bradford says at this point, it’s too early to tell how many people are going to need help, and of those, how many will actually be able to get it.

Even before the pandemic, close to one in three households in the country had a hard time affording power bills, according to the U.S. Energy Information Administration. An analysis by Georgia Tech found that low-income households in Atlanta pay an outsize amount of their income on gas and electricity.

Harriet Feggins, who lives in Atlanta’s Vine City neighborhood, said she’s been reaching out to organizations for assistance.

Before the pandemic, she worked as a private nurse, helping paraplegics, veterans, and others who needed help at home with bathing and cleaning.

But she’s at-risk for the coronavirus herself, with asthma, high blood pressure, and diabetes, and she’s lost most of her income as she’s mostly stayed home the last few months with her 12 and 13-year-olds, who also both suffer from asthma.

“It’s been kind of tough,” she said. “But I’ve been keeping the faith and just looking out for my neighbors.”

The Westside Future Fund has been bringing food to her family, and she said she’s worked to use less electricity — even turning some breakers in her house off — and put as much as she can towards her power bill. And she’s brought some money in by babysitting for children of essential workers and cleaning houses.

She said she’s not behind on payments now, but she’s worried about what would happen if she did miss any.

“You gotta do what you got to do because, like, Georgia Powers is not playing,” she said.

‘Georgia Power Is Not A Charity’

Georgia Power is encouraging people who are worried about bills to get in touch, to figure out payment options.

“We know this is still a critical time with the pandemic still going on. We want to be flexible with our customers,” spokeswoman Allison Gregoire said.

And state regulator Tim Echols pushes back on the idea that the moratorium should have continued longer. He said so many people falling behind on their bills was a concern to him since they’ll have to catch up eventually.

“Letting them dig further holes with their arrearage and being behind with the power company is not helpful,” he said. “Georgia Power’s not a charity.”

The bills that never end up getting paid off could eventually largely be covered by Georgia Power’s other customers. Georgia Power and its shareholders won’t have to cover most of that debt.

‘So Many Things Stacked Against Us’

This is just one more way the coronavirus pandemic has highlighted inequities, said Chandra Farley, director of the energy program at the Partnership for Southern Equity.

“People who are already disenfranchised, people who are already the most overburdened, particularly black people, communities of color, more vulnerable populations like our seniors, are always in a position of overexposure to these kinds of shocks and stressors,” she said.

Howe recently started a business making soaps, and she’s encouraging other parents she knows to try starting their own businesses, too. She plans to sign up for Georgia Power’s payment plan.

“I know for myself, I’ll figure it out,” she said, but she worries about other families that are juggling rent, food, utility and medical costs while also — like her — trying to figure out remote learning for their kids. “We have so many things stacked against us, and even the families you think are doing OK, are not.”