HomeEnergy and UtilitiesGeorgia Power’s Vogtle spending climbs, but no... 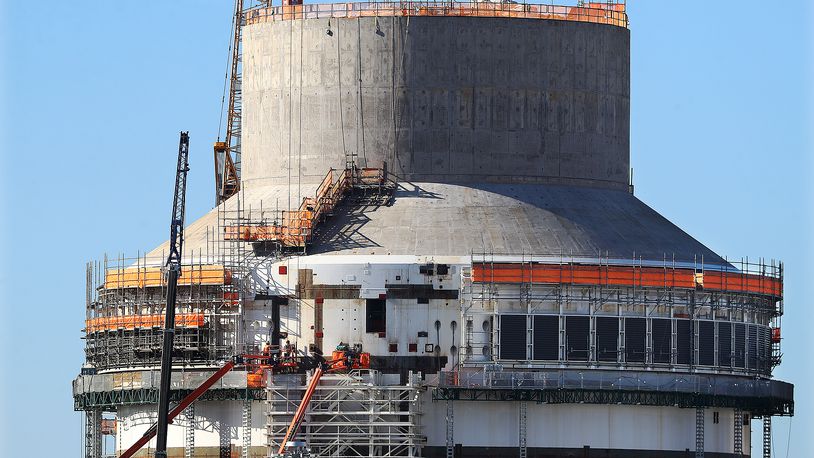 Georgia Power spent more than $500 million dollars on the two new nuclear reactors at Plant Vogtle in the first half of this year and it may take another $1 billion to complete the project, the company said Wednesday.

Years behind schedule and billions over budget, the company said it was only presenting the expenditures to the Georgia Public Service Commission (PSC) for “review.” The new costs, however, could be recovered from customers in the future through electricity rate hikes, if state regulators allow them.

The recent spending figures and cost projections were revealed in a semi-annual construction progress report, which the utility is required to file with the commission. Wednesday’s filing was the 27th update the company has submitted since work began on the new Vogtle reactors, which are being built near two existing reactors outside Augusta.

Once completed, Vogtle Units 3 and 4 would be the first new commercial nuclear reactors built in the United States in roughly three decades. After years of setbacks, the company indicated in the filing that the units are finally nearing completion.

Georgia Power did not forecast any new delays Wednesday and said it still expects Unit 3 to be generating electricity early next year, with Unit 4 joining it by the fourth quarter of 2023. The company said achieving those deadlines, however, is contingent on successful testing and continued productivity on the site.

“Any further delays could result in a later in-service date,” the company said in the filing.

Once the new units are online, Georgia Power says Plant Vogtle will be able to generate enough electricity to power one million homes and businesses. As the effects of human-caused climate change accelerate, the plant’s electricity will be produced without contributing greenhouse gas emissions.

Still, the new units are more than five years behind schedule and their total cost has ballooned to more than $30 billion, more than double what was initially projected.

Georgia Power customers are already paying for the units in their monthly power bills. PSC staff have estimated that by the time the reactors are completed, the average Georgia Power residential customer will have already paid $900 to cover Vogtle construction costs. The rates that many Georgians pay for their electricity could climb even higher in the years to come — over and above rate hikes the utility is seeking starting next year.

Georgia Power has estimated that baking in the $7.3 billion in costs that have been deemed reasonable so far by the PSC could drive customers’ electricity rates up by 10%. However, analysis by PSC staff found that if Georgia Power’s full project costs are factored in, the potential increase could be closer to 13%.

“We’ve been talking about these units and how it’s going to go into people’s power bills for quite awhile now,” said Liz Coyle, the executive director of the consumer watchdog group Georgia Watch. “We’re finally getting to the point that it looks like within the next year or two, people will see a significant increase in their power bills just tied to Vogtle 3 and 4.”

If approved by PSC commissioners, the increased rates from Vogtle would be on top of the nearly 12% rate hike the company has already asked state regulators to approve over the next three years. Those proposed rates will be the subject of hearings starting in late September.

The project’s construction costs have also been a point of contention among the units’ co-owners.

In recent months, both Oglethorpe Power and Dalton Utilities — which hold ownership shares of 30% and 1.6%, respectively, in the new Vogtle units — have exercised options to cap their spending on the project. Georgia Power, which owns the largest share of the reactors’ capacity at 45.7%, has argued that neither utility has hit the exact dollar amount at which it is allowed to move to protect itself from additional costs.

Oglethorpe also filed suit against Georgia Power in June for breach of contract and other claims related to plant costs. MEAG Power, which holds a 22.7% stake, has filed its own breach of contract suit, but has not moved to exercise its own option to cap its spending. It has until Sept. 26 to do so.