Priority Shuffle
The first activity was a ‘priority shuffle’ where participants were given 15 consumer issues and asked, as a group, to rank them in order of importance from ‘most important for soldiers to receive information on’ to ‘least important’. This gave the group an opportunity to begin speaking to one another, break the ice, and give us important feedback about ‘why’ they thought certain topic were more important, less important, or even just a topic they had not considered before. Notable themes included:
• Purchasing and financing new and used cars was consistently a top-rated issue.
• Many participants did not know what the ‘do-not-call’ registry was or how to sign up for it.
• Renter’s rights outranked mortgage issues by far, citing relocation as the number one reason soldiers were less concerned with purchasing a home. 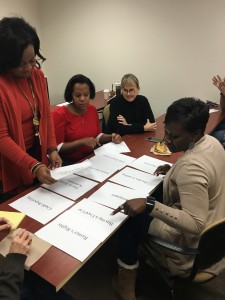 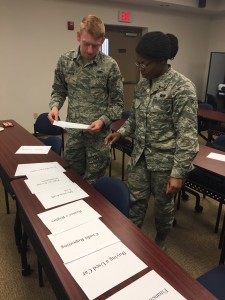 Agree/Disagree
The second activity was an ‘agree or disagree’ exercise, where the facilitator read off a list of 20 statements, and the group moved around the room based on whether they agreed or disagreed with the statement. We received great feedback from this exercise about perceptions, knowledge level around key laws and rights for servicemembers, and how military personnel might access such information. Notable themes included:
• Most soldiers and family members did not know what the Servicemember Relief Act could offer.
• Almost all participants, in all categories, thought that the Georgia lemon law would protect them from purchasing a bad new OR used car. In Georgia, this law only protects consumers when purchasing a brand new car.
• Few participants knew what the Federal Trade Commission does as an agency or how, why, or when they would report to the agency when certain issues arise.
• Participants were largely split on whether or not using ‘buy here, pay here’ dealerships were OK to use. Most participants who said they were OK to use noted that it might be the only choice for a soldier with poor credit.
• Few participants knew that there is no licensing or education requirement for tax preparers in the State of Georgia. 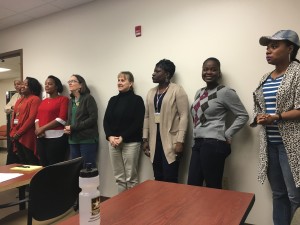 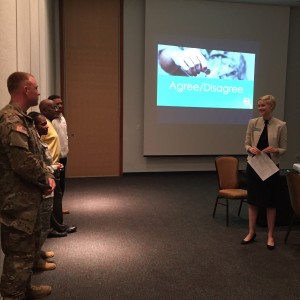 Data Review
Through our partnership with the Better Business Bureau of Georgia, we were able to access call data for complaints lodged against companies based in Georgia by servicemembers and their families for 2014 and 2015. Our legal extern compiled this data into graphics by region, by complaint type, and by proximity to installation. We then shared the relevant data with participants at each installation site to ask them: “does this look right?”; “what complaints are missing?”; “what are you most surprised by?”; “would you have thought to complain to the BBB? To the military line?” and other questions about common issues they experience in their respective region. Notable themes included:
• Most participants did not have a clear understanding of what the BBB does or who to lodge complaints to in Georgia or at the federal level.
• Many participants, especially soldiers, said they were not likely to complain generally.

Resource Review
We shared several resources already in existence on the topics of debt collection, the Military Lending Act, and payday lending with each group for their thoughts on formatting and style. We presented content from the Tennessee Military Protection Guide, which is mostly in narrative form, as well as graphics created by the Federal Trade Commission, Military OneSource, the Consumer Financial Protection Bureau and Georgia Watch to compare and contrast. Notable themes included:
• Most participants stated they did not want the guide to be stylized in military greens, wanted something that would stand out.
• Most participants said that a catchy and easy to understand graphic is good at the beginning, but then a concise section afterward that goes more in depth would be helpful, especially for leadership.
• Worksheets would help soldiers to actualize concepts in the guide.
• Headings, bullets and accessible language is important.
• References to sources should be footnotes throughout, not in the end of the document. 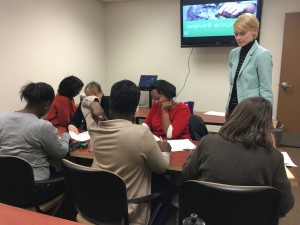 Source Survey
At the end of the session, we had each participant fill out a survey indicating a) where they would be most likely to seek out information contained within the guide and b) in what formats we should make the guide available. We received great feedback via the survey, and almost all participants noted that we should make special effort to ensure it would be made available and readable via mobile devices. 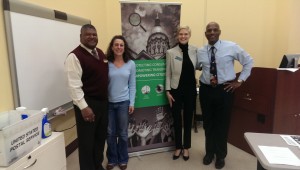 Georgia Watch plans to engage in a collaborative drafting process for the guide over the next few months. We are thankful to the Sears Consumer Protection and Education Fund and our partners at the Attorney General’s Office, Army Community Service branches and Airman and Family Readiness Centers. Learn more at: www.georgiawatch.org/military