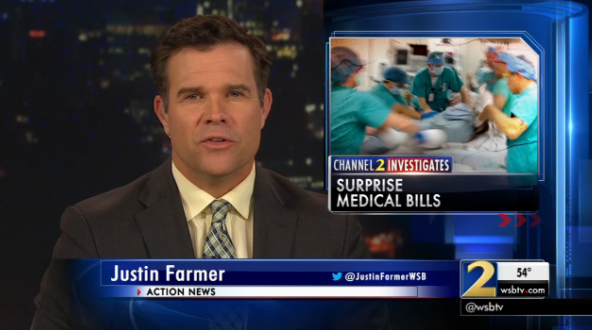 GWINNETT COUNTY, Ga. — It is a problem thousands of Georgians are facing after they visit a hospital or medical provider — they are slammed with a surprise medical bill.

Most think they are covered by insurance at the in-network facility and don’t expect to be treated by an out-of-network doctor or provider. Consumers are then on the hook for hundreds or thousands of dollars.

“There are not as many protections for consumers as we would hope,” said Beth Stephens, the health access director for Georgia Watch.

That is why Georgia Watch is pushing for legislation that would address some of these issues in the state.

Gwinnett County couple Carol and Nick Wyatt say they received a surprise medical bill. His wife went in for a colonoscopy. The couple thought they were covered by their insurance at the facility.

“Of course, I did my homework. I’ve been in health insurance since 1982,” Nick Wyatt said.

Even though they were at an in-network facility, without the couple knowing, an out-of-network anesthesiologist treated Carol Wyatt. They are now facing a bill for nearly $2,000.

“It is at least (not) moral if not ethically wrong,” Nick Wyatt said.

Consumer Reports has reported that the surprise medical bills are common. In its online survey of 2,200 adult U.S. residents with private health insurance, one-third of respondents reported receiving a surprise bill after their health insurance paid less than they expected or not at all.

“Even if you dot your I’s twice and cross you T’s twice, and even then you are not sure you are covered under the insurance,” Carol Wyatt said.

“There are quite a few people that ruin their credit ratings and lose their beautiful homes,” said Georgia state Sen. Renee Unterman, R-Buford.

Unterman says she plans to draft legislation that mimics other states that have passed legislation addressing this issue.

“The problem is this game is eating us up, and the poor sick people are the ones that are being left out in the cold,” Nick Wyatt said.