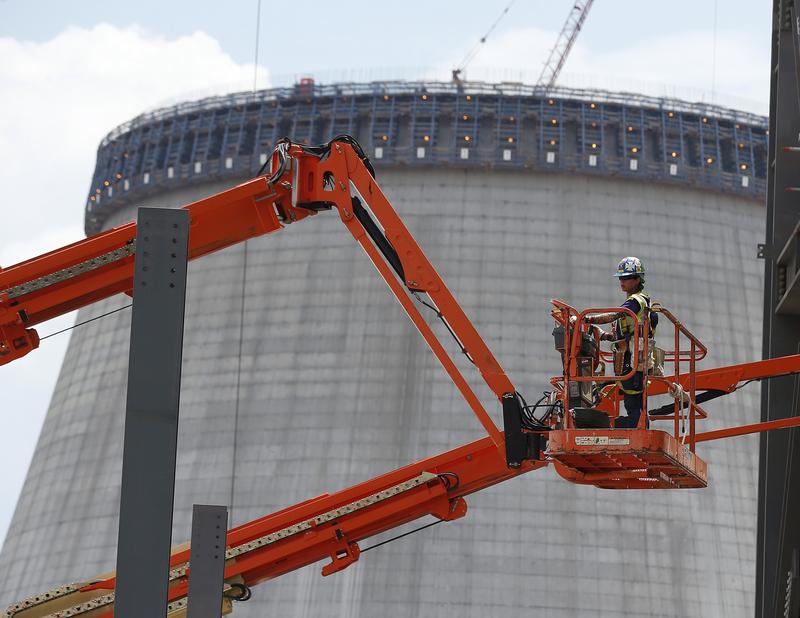 Georgia Power says it wants to keep building two nuclear reactors, even as the cost to complete them has doubled since the project was proposed.

The future of the nuclear expansion at Plant Vogtle has been up in the air since Westinghouse, the lead construction contractor, went bankrupt earlier this year. A similar project in South Carolina was scrapped this summer after utilities decided it didn’t make economic sense to continue with it.

That leaves Georgia with the only nuclear power plant under construction in the nation.

Georgia Power recommended to state regulators Thursday to keep construction going. Jacob Hawkins, a spokesman for the utility, said the company did look at other options with Plant Vogtle, including canceling the project, converting it to natural gas or expanding renewables.

“[Georgia Power] ultimately came to the decision and the recommendation to the Public Service Commission that continuing these projects and completing them would be in the best interests of our customers over the next 60 to 80 years,” he said.

“I am very pleased the decision has been made to go forward,” he said. “I think we have invested so much.”

Georgia Power projects the capital costs to complete the project to be $19 billion. With financing costs included, the price tag climbs up to more than $22 billion, according to documents filed Thursday with Georgia regulators.

The two new reactors were supposed to be up and running. Now, they’re projected to go into operation in November 2021 and November 2022.

“Those dates, we would argue, are extremely optimistic,” said Sara Barczak, high risk energy choices program director with the Southern Alliance for Clean Energy. “We are very concerned that what we’re seeing in these filings are covered in rose-colored glasses and are not representative of what will really happen.”

Georgia Power also raises issues outside of its – or Georgia regulators’ – control. The utility wants Congress to extend its deadlines for tax credits and extend loan guarantees from the Department of Energy. And it’s waiting on money from Toshiba.

The Japanese electronics company is the parent company of Westinghouse, and it’s promised more than $3.6 billion to utilities in Georgia. To make those payments, it’s trying to sell off its computer chip division.

“It shows you how interconnected everything is in the world’s economy and how the finances of multinational corporations are, of course, very intricate and intertwined,” said Bill Freebairn, senior managing editor at Platt’s, where he covers nuclear power.

The finances involve pretty much everyone in Atlanta, too, because Georgia Power customers have a line item on their bills every month that goes toward Plant Vogtle.

Liz Coyle, with the consumer-advocacy group Georgia Watch, said ratepayers have put about $2 billion toward the project since 2011.

“If approved by state regulators, continuation of the project will increase the utility’s business and operating risk profile because total costs are open ended and because Georgia Power’s parent company will be assuming construction risk on its balance sheet,” Moody’s said.

Toshiba’s first payment to Georgia Power of $300 million is due in October. Georgia regulators will decide next February whether or not to allow Georgia Power to keep the project at Plant Vogtle going.