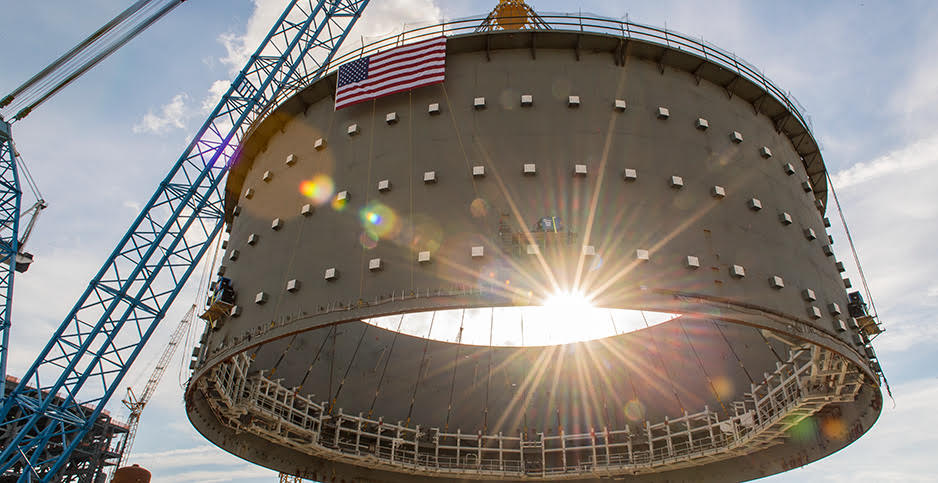 Developers of the nation’s lone nuclear construction project in Georgia have ordered enriched uranium fuel rods — a sign of their confidence that Plant Vogtle, plagued by delays and cost overruns, will be operational by 2022.

But some are already calling that timeline into question.

Georgia Power Co. said yesterday it ordered 157 fuel assemblies for the first unit at Vogtle, which is scheduled to load fuel in late 2020. The move signals the utility, a unit of Southern Co., believes construction remains on schedule for the two reactors to start producing electricity by November of 2021 and 2022, respectively.

The Vogtle units are the first to be built from scratch in the United States in three decades.

Yet a highly anticipated report released yesterday from the Georgia Public Service Commission’s staff warns otherwise. The team — a group of analysts and consultants — said those dates will be a “challenge to achieve.”

It’s likely that Southern CEO Tom Fanning will be talking about both to Wall Street analysts this morning. Southern is scheduled to report its quarterly financial earnings today.

“It’s certainly noteworthy,” said Georgia Public Service Commissioner Chuck Eaton. “If they are going to stay on their schedule, they believe that ordering enriched uranium is part of that schedule.”

Besides being the only nuclear construction project in the United States, Vogtle has received national attention for more than a decade for various reasons. It was the first to get a construction and operating license from the Nuclear Regulatory Commission under a new approval process, and it was the first to get federal loan guarantees, issued by the Energy Department under the Obama administration.

Energy Secretary Rick Perry also visited Vogtle earlier this year, inking a deal for an additional $3.7 billion from the DOE-funded program that President Trump wants to eliminate. Perry defended the program and touted the importance of nuclear power in the United States (Energywire, March 25).

Perry could have been celebrating the reactors’ startups had Vogtle remained on schedule. But federal regulatory delays and vendor problems pushed the project off track, roughly doubling the cost.

The companies reviewed Vogtle’s quantities, staffing and productivity since that time and filed the results with regulators in May. The document confirmed that construction was on track (Energywire, May 2).

The PSC staff’s nine-page report is an analysis of that filing. It challenges a number of Georgia Power’s and Southern Nuclear’s assertions, as expected.

The PSC and staff review Vogtle’s cost and schedule twice a year, but yesterday’s report and the May “rebaselining” document are outside that normal cycle. But both are beginning to shape a familiar narrative that has been repeated over time.

“[Southern Nuclear’s] overriding objective is to complete the project as soon as possible, regardless of incremental project costs,” wrote the review’s authors.

That story arc begins with the PSC staff cautioning that it will be difficult for contractors to meet Vogtle’s construction deadlines, and Georgia Power pushing back, as it did yesterday.

Company spokesman Jeff Wilson reiterated the project’s PSC-approved dates for Vogtle’s reactors, November 2021 and 2022, in an email. Georgia Power also touted the milestone of ordering fuel and that there are roughly 8,000 workers on-site.

In the document, the PSC staff also flagged issues including a higher-than-planned absenteeism rate, much lower productivity for mechanical and electrical craft workers, and recent amounts of work being deferred into the future.

What’s more, Southern Nuclear and Georgia Power want to push productivity rates even higher, and they must hire more workers and supervisors to do so. The companies initially had trouble last year finding the number of craft workers it said it needed to keep Vogtle’s construction on track, but they eventually met that goal.

The PSC staff isn’t so sure, writing that it “has serious doubts as to whether [Southern Nuclear] can meet the high production levels per month and sustain those levels” for an upcoming 10-month period.

“The project will work diligently to attract the necessary craft labor, enhance site leadership and drive productivity improvements,” Wilson said in an email to E&E News.

The staff report did not say that Vogtle could not meet the current deadlines or that the reactors were behind schedule. Wall Street analysts also did not seem fazed yesterday, noting that the staff has taken this approach before.

“The staff often takes a more critical approach in these matters especially with Vogtle,” analysts for Guggenheim Securities LLC wrote in a research note issued later in the afternoon.

But delays cost money, and now the stakes are even higher.

Southern Nuclear and Georgia Power no longer enjoy the fixed-price contract they had with Westinghouse — the chief reason why it went bankrupt — and are operating under one that shifts the economic risk onto the utilities and ultimately their customers.

Indeed, Vogtle’s costs jumped $2.3 billion in just one year, between 2017 and 2018, spooking Wall Street and nearly grinding the project to a halt after one of the public power developers wanted to walk away. Georgia Power wrote off its $1.1 billion share and struck a new deal with the other utility developers to take on more risk.

Liz Coyle, executive director of the consumer watchdog group Georgia Watch, was critical of how much money Georgia Power continued to spend on the reactors despite the PSC staff’s fresh concerns about meeting the deadlines.

Much of that money is slated to wind up in monthly utility bills.

“Yes, there’s progress, but there’s still not sufficient information in the schedule to know when the units are going to be complete,” she said. “The staff report raises as an issue the fact that the company is spending at a faster rate in order to try to meet those current forecast dates.”

Eaton, a veteran regulator, acknowledged that Georgia Power is more optimistic than the PSC staff.

He’s been a commissioner throughout all of Vogtle’s challenges, including at two critical times when the project’s future was uncertain.

“All of us are very focused on it; I can say that I feel better about the way things are going today than I ever have been,” he said.