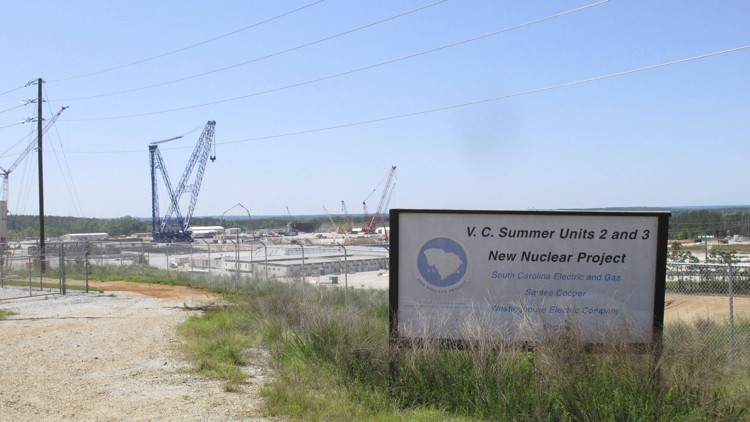 By: Russell Grantham – The Atlanta Journal-Constitution

The plug is being pulled on a South Carolina nuclear project that is Plant Vogtle’s near-twin, because it would be “prohibitively expensive” to finish, the partners said.

The partners in the South Carolina project, SCANA and a supplier to electric cooperatives, Santee Cooper, said Monday that they made the decision because of rising costs of the $14 billion project, falling demand for electricity, construction delays and the bankruptcy of a key contractor.

Plant Vogtle, near Augusta, is virtually identical to the V.C. Summer nuclear plant project in South Carolina and faces a similar set of challenges, raising obvious questions about the future of the Georgia project, which is also under review.

The Vogtle project is more than $3 billion over budget and over three years behind schedule. Critics also have said that slowing demand for electricity has made the bigger nuclear plant unnecessary and overly expensive compared to alternatives.

Monday, critics said the events in South Carolina indicate Vogtle’s costs and delays also are mounting rapidly, and called for state regulators to set a deadline soon for Georgia Power, the lead partner, to show its cards on the project’s future costs and completion date.

“We could still be talking about a go or no-go decision” in December, said Liz Coyle, executive director of consumer advocacy group Georgia Watch, while Georgia Power continues to spend about $50 million a month on Vogtle’s ongoing construction.

Friday, Georgia Power said in a filing to state utility regulators that it planned to include the company’s recommendation on whether to complete the project or not in its regular rate case filing at the end of August.

Those cases typically go through months of filings, meetings and hearings before the Georgia Public Service Commission makes a decision.

The head of the Georgia PSC said Monday that differences between the two projects may point to a different outcome for Vogtle.

“The dissimilarities of these projects should be recognized before making any suppositions on whether construction will continue at Plant Vogtle based on decisions made in South Carolina,” said Stan Wise, chairman of the Georgia Public Service Commission.

He argued that the Georgia project’s customer base is over three times larger than that in South Carolina, and that differing financial factors may make it easier for Plant Vogtle’s construction to continue.

A spokesman for Georgia Power also said the two projects are “unique and different in many ways,” without elaborating.

Last week, Georgia Power said it has finalized an agreement with Westinghouse to continue providing support for the project. The Atlanta utility said last week that it is continuing to analyze the project’s costs and viability while it continues construction.

What has been wreaking havoc with both projects is the late-March bankruptcy of Westinghouse Electric. The company supplied the same designs for both sites’ reactors, and had been overseeing construction.

But heavy losses on the projects pushed Westinghouse into a Chapter 11 reorganization. The bankruptcy court allowed Westinghouse to tear up its contracts at both projects in which it had agreed to shoulder much of the cost overruns.

Those losses have reportedly threatened the viability of its parent company, Japan’s Toshiba Corp., which has promised billions of dollars in financial guarantees on both projects. Those guarantees could become moot if Toshiba fails.

Monday, in a vote to suspend the project to build two new reactors at its V.C. Summer nuclear plant, Santee Cooper’s board said it feared that Westinghouse Electric’s bankruptcy would delay completion several years and cause the total project costs to balloon to $25 billion.

“We simply cannot ask our customers to pay for a project that has become uneconomical,” said Lonnie Carter, Santee Cooper’s chief executive.

Santee Cooper said its analysis showed that the V.C. Summer expansion wouldn’t be complete until 2024, well past a 2021 construction deadline the owners would need to meet to cash in on billions of dollars in federal tax credits.

Georgia Power officials have likewise said in recent testimony that they do not expect to complete the Vogtle project to add two new reactors by the 2021 deadline for similar tax credits.

The U.S. House of Representatives recently approved a bill to extend the tax credit deadline, but the proposed legislation hasn’t gained traction in the Senate, according to press reports.

Bobby Baker, an Atlanta attorney and former commissioner on Georgia’s PSC, said the demise of V.C. Summer’s expansion will likely undercut the Vogtle project by raising costs and putting financial pressure on the project’s partners.

Georgia Power owns almost 46 percent Vogtle, while the city of Dalton and two suppliers to utility cooperatives and communities, Oglethorpe Power and MEAG, own the rest.

“The abandonment of the V.C. Summer Project will further jeopardize the financial integrity of the Vogtle Project and is sure to increase costs for Vogtle,” said Baker. “Now the big question is whether Oglethorpe or MEAG follow in the footsteps of Santee Cooper.”

Greg Jones, an Oglethorpe Power spokesman, said, “We are thoroughly evaluating all options and any decision to go forward would need to be based on very high confidence cost estimates. No options, including suspension similar to Summer, have been eliminated from consideration.”

Oglethorpe supplies wholesale power to 38 electrical utility cooperatives that are its owners.

A spokesperson for MEAG, or the Municipal Electric Authority of Georgia, could not be reached.

Financing: Surcharges of about 18 percent on customers’ bills