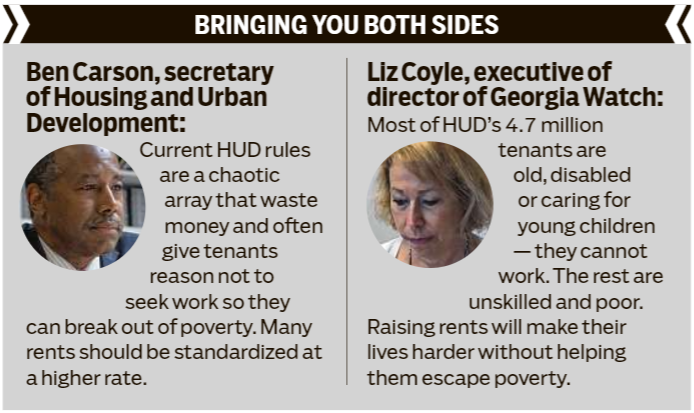 Image courtesy of the AJC.

As the door to his home opens, Tony Caldwell, 58, shifts his wheelchair slightly to accommodate his guests.

The former delivery driver for a concession machine company lives in Westminster Apartments, a 32-unit, generic-looking, two-floor apartment complex, fenced off from the surrounding Piedmont Park area in Atlanta. It’s better than most public housing, he says, although the rooms are modest and the ground floor not always secure.

Caldwell and his wife Peggy Ogburn, who’s also retired and disabled, receive government benefits totaling $2,071 a month. From that, they pay $574 in rent. Theirs is among the nearly 125,000 low-income households in Georgia that receive federal rent subsidies from HUD — the U.S. Department of Housing and Urban Development.

Caldwell has heard about HUD Secretary Ben Carson’s rent reform proposals. He knows Carson considers the current program broken. He knows Carson wants to change how aid is calculated, raising the rent for millions in public housing. He knows the HUD boss wants to create a system that encourages, even pressures, many subsidy recipients to work.

But Caldwell scoffs at the idea that someone like him could game the system or exploit taxpayer aid. “Most of my money goes to food, clothing and medication,” he said. “After that, the money’s gone.”

There are few details on how Carson’s rent reforms would work. And any changes would require congressional approval. But the proposed change, which will likely be tweaked before there is a final plan, is seismic enough that it has lots of folks wondering and worrying.

So The Atlanta Journal-Constitution talked to housing experts, public policy analysts (some opposed, others in favor of Carson’s plan), and a number of residents who receive HUD assistance to gauge the reaction among locals.

Some people are surprised to find themselves in public housing.

A few years ago, Nancy Daniell had a picture in her mind of the people who lived in public housing or received HUD housing benefits. And she wasn’t in it.

“I thought they were mostly uneducated women who probably had a lot of children and didn’t get child support,” Daniell said.

Then, the white, 66-year-old, college-educated mother lost her home in the housing crisis in 2008, just as she was nearing retirement age. Daniell, who lives in a subsidized apartment complex for seniors in Acworth, said she didn’t have much in savings to fall back on.

She’s not sure how Carson’s proposal would affect her, but she’s worried.

“So my cost of living may go up, but my income will stay the same,” said Daniell, who used to work in marketing and advertising and now lives on Social Security.

“It’s not realistic,” she said. “In my situation, there’s no way anybody is going to hire a 66-year-old woman. I can’t tell you how many job interviews I’ve been on and they look at you. We’re not lazy, we’re just old.”

If she can’t handle higher rent, Daniell is not sure where she would live. “I have a lot of friends in the area, so I guess I will just be couch-surfing going on 70 years old.”

Gross income is the amount of money that comes to a household, whether from working, pensions, retirement or government benefits. Adjusted income is that amount minus deductions, for example deductions for child care. So the increase in rent could be significant.

HUD requires participants to meet income requirements. Some of the agency’s programs are geared toward the elderly, homeless veterans and the disabled.

Under HUD’s legislative proposal, current HUD-assisted senior citizens and people with disabilities would not experience any rent increase for the first six years. After that, the proposal calls for new rents for these elderly or disabled households of either $50 a month or 30 percent of gross income, whichever is greater.

If the proposal passes as it is, elderly and disabled recipients new to HUD programs would be required to pay 30 percent of their gross income to rent.

According to a HUD spokesman, slightly more than half of the 4.7 million households getting HUD assistance consist of disabled or elderly people. Many other HUD-subsidized households are led by single mothers who would lose their deduction for childcare under the proposal in its current form. Only about one-fifth of the residents who reside in HUD-assisted housing are “workable, non-senior, non-disabled individuals who are not taking care of a family member or full-time students,” according to National Church Residences, which says it is the largest provider of affordable senior housing in the United States.

Carson’s proposals are in line with Republican calls to de-emphasize government social programs and steer toward private and market-oriented solutions. That approach has critics and advocates.

Consistency alone is a selling point, said supporter Benita Dodd, vice president of the Georgia Public Policy Foundation. “There are 3,000 public housing authorities and so many rules. Low-income individuals don’t know what kind of work they can do and not get tossed out” of their home.

For people who can work, public housing should be a way station, and the subsidy they are given should help them live but not tie them down, she said.

“I am not sure what the number should be,” Dodd said. “I like that the proposal increases the cost of renting but lets people know how much they can do without relying on it. I like the philosophy that we should look for ways to move people out of welfare and onto their own two feet.”

Cooper is co-chairman of Project 21, the black leadership network of the National Center for Public Policy Research, a conservative nonprofit think tank.

“Part of what we’ve been asking for is that we engage in a new round of welfare reform,” said Cooper. “We want to separate the needy from the greedy. Able-bodied people ought to be encouraged to become independent, then with the resources we have, we’re able to better help those who can’t help themselves.”

But housing costs eat up a lot of people’s budgets. And the Carson plan could create even greater housing problems, said Liz Coyle, executive director of Georgia Watch, a consumer advocacy organization.

“For people living paycheck to paycheck, every part of that family’s budget is a piece of a very complex puzzle,” Coyle said. “If you increase that additional pressure, it potentially causes them to cut back on other things like health care needs. It leads to that spiraling that causes people to go deeper in debt. And how does that meet HUD’s mission?”

Deirdre Oakley, a Georgia State University sociologist who has studied housing issues, said “the most vulnerable would be the working poor. Custodians, other jobs that are minimum-wage or low-income positions.”

The average rent in Atlanta is $1,141 a month, according to RealPage, which provides analytics to the real estate industry.

HUD generally charges tenants 30 percent of their income, but subtracts taxes and other deductions. A person working full-time at minimum wage would gross about $15,000 a year or about $1,257 a month. Thirty percent of that is $377.

Yet advocates for low-income workers say there is a kernel of truth in Carson’s premise: Some people lose benefits when their pay goes up, so they have a disincentive to work more, said Bambie Hayes-Brown, who was employed for years by housing authorities and is now president of Georgia Advancing Communities Together, a statewide network of nonprofit housing and community development organizations.

Even among the minority who are working-age and healthy, many can only work if their childcare expenses are somehow deducted from their rent formula.

And even among those who have jobs, wages are not keeping up with rents, Hayes-Brown said. “In 22 years working with affordable housing, I have not seen anyone who is living large in public housing. It just doesn’t happen.”

The minimum HUD rent is $50 a month, but some people need even that to be subsidized.

For example, Letresa Chaney, 40, lives in the Forest Grove Apartments in Doraville with a child and a grandchild. She used to cook and drive for a company, but she was injured in a car crash last year. For the foreseeable future, the injury will keep her from working, she said.

She has no money even for her $50-a-month rent, but that is covered by a $200 utility allowance that also pays for electricity and gas. She buys groceries with food stamps, while Medicaid pays her medical bills.

If the rent tripled — as is implied by Carson’s proposal — she might be in trouble, she said. “I couldn’t pay it — not if they don’t raise the utility allowance, no. I might be homeless.”

Shelby Porter, a former schoolteacher, lives in the City Views at Rosa Burney apartments in Atlanta.

Any increase “would really hinder a lot,” said Porter, 63, who is single and not working at the moment. “It puts an extra burden on people who are doing the best they can. I don’t think it’s very wise.”

“A lot of people don’t have skills,” Porter said. “Maybe if he (Carson) had programs first to help people learn skills, then maybe they could work.”

Some HUD recipients live in apartments run by local housing authorities. Others live in privately owned housing with market rents but receive subsidies.

The owners who rent to HUD-aided tenants say the Carson proposals could end up being bad for tenants and landlords, said Jeff Cronrod, founder and board member of the American Apartment Owners Association.

“A tenant currently receiving a housing subsidy is already at the poverty precipice and any other downward pressure will only add to their inability to get out of the financial hole they currently find themselves in,” he said. “From a landlord’s viewpoint, the imposition of Mr. Carson’s plan could increase delinquency and eviction rates.”

For now, it’s all intense uncertainty for those on either side of Carson’s proposed overhaul. And sitting firmly opposed is Caldwell.

Even after the 1985 car crash that broke his neck, left him in a coma for weeks, and made a wheelchair his “new normal,” Caldwell worked following a lengthy rehabilitation. He landed a job as a receptionist for Goodwill Industries, then was employed as an operator and eventually a supervisor at a hotel.

But several years ago, he says, a condition that causes high blood pressure forced him to retire. Now he hopes he and his wife will get to hold on to their HUD-subsidized unit at Westminster Apartments.

“It ain’t like I said to myself, ‘One day, I’m going to grow up and stay in public housing,’” he said.