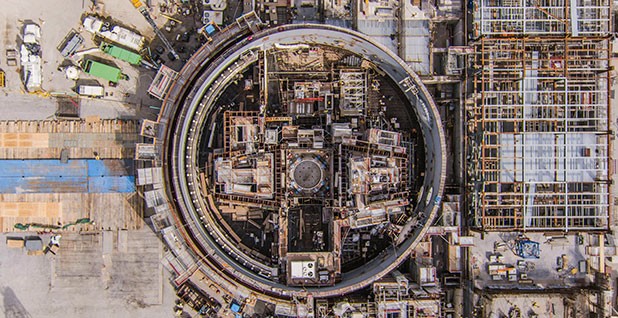 Dalton Utilities Inc.’s CEO was concerned that an economic recession could hamper his company’s ability to pay for its share of a nuclear expansion project in Georgia, documents obtained by E&E News show.

But CEO Tom Bundros was more worried about reaction from consumer advocates if Dalton Utilities had to issue revenue bonds to cover the remainder of its 1.6 percent share for the Plant Vogtle project. That’s according to statements he made in emails to Dalton’s board chairman and top executives at other Georgia utilities that are partners in the reactor project.

This is why Dalton Utilities wanted the ability to issue revenue bonds without a public vote, Bundros’ emails state. It also is the chief reason for the utility’s dogged but unsuccessful push to get the Georgia Legislature to grant such an exemption.

“Dalton Utilities may very well need to issue additional debt to fulfill its obligation for remaining construction of the Vogtle Project. Given the emotion behind those who favor vs those who don’t favor nuclear energy, I do not want to ‘politicize’ the Vogtle Project by having to hold a voter referendum, which is required under current Revenue Bond law,” Bundros wrote to the city of Dalton’s mayor, City Council and city manager.

A Dalton Utilities spokeswoman did not respond to inquiries from E&E News.

The emails document a push from Bundros, Republican Georgia Gov. Nathan Deal’s chief of staff, members of the City Council, Georgia Power Co.’s chief lobbyist and others to get all members of the city of Dalton’s state legislative delegation and other key leaders to support the bills.

They also display a widespread effort, starting with Bundros, to tell the media and lawmakers that this was not about Vogtle.

“I would appreciate your support … pls state that the purpose of the bill(s) is to give the City of Dalton/Dalton Utilities optionality to operate its utility systems in the best interest of its customers, who are primarily industry,” Bundros wrote in an email to the CEO of the Municipal Electric Authority of Georgia (MEAG); the chief operating officer of Oglethorpe Power Corp.; and Chris Cummiskey, the executive vice president of external affairs and nuclear development for Georgia Power, a unit of Southern Co.

All are partners in building twin reactors at Plant Vogtle in southeast Georgia. Georgia Power and Southern’s nuclear unit have taken over as the main contractors since Westinghouse Electric Co. LLC went bankrupt a year ago.

Bundros continued, “BETWEEN THE FOUR OF US, my motivation for getting this bill done is to do worse case contingency planning.”

Dalton Utilities is unique in that roughly 70 percent of its customer base is industrial, as the city of Dalton and Whitfield County are home to numerous carpet and floor-covering manufacturers. Bundros noted the overdependence on the floor-covering industry in his email.

“If another recession was to hit, our top line revenues could put me in a real cash crunch that could lead me, under current legislation, to call for a voter referendum to issue a bond to meet Vogtle Capex. You can only imagine the PR of that campaign,” he wrote.

Dalton Utilities spokeswoman Kay Phillips said the utility continually monitors its financial status and currently is not concerned about its ability to pay for projects or maintain and improve its infrastructure.

Georgia Power spokesman Jacob Hawkins said the company “appreciate[s] and support[s] their desire to plan for all potential economic scenarios that could impact their business and customers.”

Georgia Power does the same scenario planning for the Vogtle expansion project and many other issues, Hawkins said. The utility represents the largest single share of Vogtle, at 45.7 percent, but collectively the public power companies that are involved are the majority.

Vogtle is the only nuclear construction project in the U.S. The project and a similar one in South Carolina were years behind schedule and billions above their forecast budgets when Westinghouse went bankrupt last year.

The electric companies in Georgia argued it was best for the state and customers to finish the reactors because they would put carbon-free baseload power on the grid for decades. The project has highlighted nuclear’s chief detraction — cost — as the reactors have ballooned to more than $27 billion from their original price tag of $14 billion.

Payments from Westinghouse’s parent, Toshiba Corp., have lowered that amount to roughly $23.4 billion, and additional federal incentives could offset that figure even further.

Dalton Utilities has spent about $160 million on Vogtle and has roughly $80 million to go. Bundros told a Georgia House panel in February that it could finance the additional $80 million through its regular cash flow. Dalton Utilities would not need to borrow money to pay its Vogtle obligation for another five years, he said.

Bundros touted the “optionality” argument that day, though state Rep. Penny Houston (R) pushed back on the issue.

The issue is more complicated, as Bundros outlined in emails to Dalton’s mayor and City Council. Dalton Utilities pays 5 percent of its top-line operation revenue — $10 million to $11 million — to the city in the form of a transfer payment.

That could be cut in order to free up cash to pay for Vogtle if debt financing weren’t available, Bundros said, again noting that is a worst-case scenario. That figure is significant for the city, however, as it represents one-third of its operating budget.

“I do not want to be an alarmist, BUT, per the recent Bond Ordinance, our contractual payments to Georgia Power for the Vogtle nuclear plant take precedence over our transfer payment to the City,” he wrote.

Again, fearing public pushback, Bundros did not mention the transfer payment issue when speaking to a reporter for a local newspaper.

“I hesitated and did not want to create a splash by saying that a voter referendum would draw out the anti-nuke crazies to Dalton nor say that the City’s transfer pmt would be in jeopardy if we couldn’t issue debt,” he wrote in an email to the Dalton Utilities board chairman.

Dalton Utilities is allowed to issue bonds for natural gas, water and wastewater projects but cannot do so for electric utility assets. To combat the argument that voters cannot have a say, Bundros and others have said publicly that voters elect the City Council, and members would have to approve the revenue bonds.

He and others were calling for parity with the MEAG cities, which have to go through a referendum process to issue revenue bonds for local generation assets or electric distribution improvements but not for wholesale electric generation and transmission assets.

Dalton Utilities had public opposition from the Sierra Club’s Georgia chapter as well as the consumer group Georgia Watch, both of which argued that the public’s voice should be heard. Perhaps more importantly, however, was that at least one of the bills needed the support of all three lawmakers who represented the county in which Dalton resides, and that didn’t happen.

Emails reflect a huge call to rally the local delegation as well as House and Senate leadership. Among them is one from John D’Andrea, Georgia Power’s governmental affairs vice president, to Bundros.

“[Georgia Power CEO] Paul [Bowers] and Cummiskey ask us to see if we could help get this bill through House Ways & Means,” he wrote. “My team has been helping with some of the local delegation members, but I had a couple of questions to better understand your intent.”

Hawkins, the Georgia Power spokesman, said the utility’s senior leadership, including Bowers and Cummiskey, are “actively involved in issues that impact our business, our customers and the energy industry.”

“We communicate frequently with other utility leaders across the state who have a shared responsibility to serve Georgia electric customers.”

The bill, H.B. 924, never made it to the House floor, but separate legislation (H.B. 189 and S.B. 484) surfaced in the state Senate days before the session drew to a close. They passed the Senate 31-13 on March 30, the last day of the 40-day session, but faced opposition in the House, including from those whom Dalton’s board chairman was hoping to get on board, and never made it to the floor before the midnight deadline.