“Refugees are the focus of Atlanta Obamacare enrollment”

HomeGeneral“Refugees are the focus of Atlanta...

“Refugees are the focus of Atlanta Obamacare enrollment”

Georgia Watch’s satellite locations in Cobb and DeKalb Counties have been heavily utilized by refugees and the international communities since the beginning of open enrollment in November. Pranay Rana, one of Georgia Watch’s certified navigators, is fluent in Hindi, Urdu, Nepali and speaks basic French. 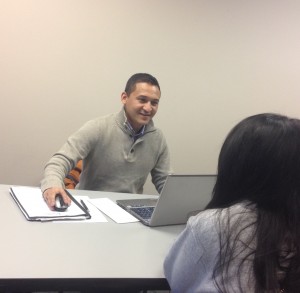 “With the deadline for open enrollment under the Affordable Care Act quickly approaching, health officials are on a last-minute push to sign eligible people up for a plan.

Among those is Elise Blasingame, a certified navigator with Georgia Watch. Friday morning, she was helping female refugees in Decatur understand their options under Obamacare.

“It’s been pretty amazing to see how interested they are in learning about the Act,” Blasingame says.

Esma Yousef has been in the U.S. for three years and previously found health care unaffordable. She wanted to learn about eligibility.

“If you want to go to the doctor, it’s very expensive. And this insurance may help many people,” Yousef says.

Emphasizing the affordability of coverage and available subsidies remains a key focus of health officials. But for some, premiums and deductibles are still barriers. That includes Athra Mahmood, who has been in the U.S. about a year.

Blasingame says more than half of those she spoke with Friday found themselves in the same situation. Other enrollment events, Blasingame says, have seen better success. [Georgia Watch has assisted over 300 individuals and families with the enrollment process since November.]

Those who don’t have insurance through their employer have until Feb. 15 to enroll in a health plan or face a financial penalty.”