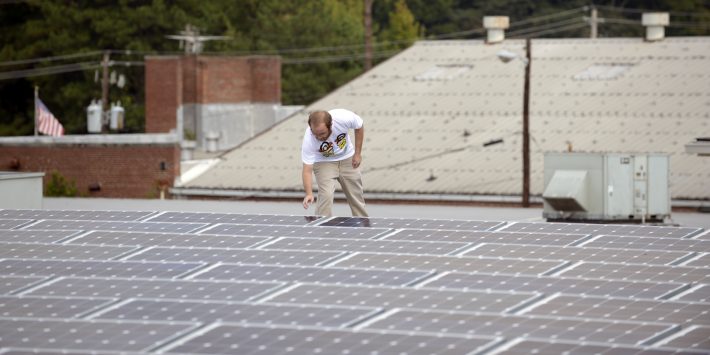 Georgia Power will increase its solar power in the coming years, close a coal-fired power plant and add more wood burning to its energy mix. Those are all pieces of its long-range energy plan, approved Tuesday morning by the Georgia Public Service Commission.

Most of the new renewable energy would come from utility-scale solar farms, though some could be from rooftop solar panels. It’s a bump up from what Georgia Power had initially proposed to add, from 1,000 megawatts, to 2,210 megawatts, enough to serve more than 225,000 homes, according to the Southern Environmental Law Center.

Public Service Commission chairman Bubba McDonald has directed Georgia Power to add more solar power in past integrated resource plans, and continued to do so with this one.

“With our partnership with Georgia Power Company, we have been able to methodically move it forward. Step-by-step, not overdoing it, not underdoing it,” he said. “By doing that, we have stayed with no upward pressure on the ratepayer, and no state subsidies at all. Totally market driven.”

The addition of biomass had not been something that Georgia Power initially proposed, but the Georgia Forestry Commission, among others, encouraged regulators to consider it in an earlier hearing on the long-range plan. Georgia Power already buys some power from biomass companies; now it will issue a request for proposals for a new 50 megawatt biomass facility in Georgia. Biomass is not as economically efficient as other sources of power, and environmental groups say it’s not good for climate change.

Public Service Commissioner Jason Shaw said that will be good for South Georgia’s economy and its tree farmers, even if it is a relatively small power plant.

“It will allow the industry to continue to grow and expand, and I do see that adding resilience to rural communities,” Shaw said.

“Those of us who want to see clean, affordable energy for the state of Georgia, the best way to get there is greater investments in energy efficiency. So this is certainly moving the state in the right direction,” said Liz Coyle, executive director of Georgia Watch.

Georgia Power will close a coal-fired power plant near Rome and an additional coal unit at another power plant, and close three dams.

This year the Public Service Commission is also reviewing the company’s rate case, the first time in six years Georgia Power was been able to ask to raise rates. It proposed to increase rates by about 7 percent. Hearings on that will begin later this year.