Senate Bill to repeal Obamacare, reaction to cuts in Georgia

Senate Bill to repeal Obamacare, reaction to cuts in Georgia 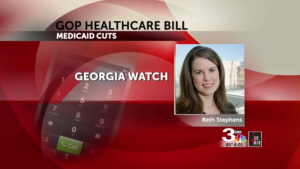 GEORGIA (WSAV) — The long-awaited Senate version of the plan to repeal Affordable Care Act (Obamacare) was released Friday to a round of criticism and some applause.

The Senate version of the bill (versus the House) was supposed to be the kinder, gentler version. It does a number of things, like extending the ACA subsidies to help people afford the cost of insurance.

It also would make it harder for states to provide insurance companies the ability to charge sick people and those with pre-existing conditions more for coverage.

It does eliminate taxes to wealthier Americans and entities like insurance and drug companies, monies which were used to help fund the ACA. And the Senate version would cut Medicaid (even more than the House bill) but over a longer period of time.

“We feel strongly this would set Georgia back from healthcare access for the most vulnerable people in our state and that is definitely something we don’t want,” says Beth Stephens from Georgia Watch.

She says up to 2 million Georgians (children, veterans and elderly) use Medicaid services daily. Medicaid is a state program but it relies on funds from the federal government to support those who need the services.

“And since we’ve got all these people, kids, seniors, veterans, people with disabilities in our state who get Medicaid, who depend on that program, it’s really a concern to think about many of those folks getting less than what they already get,” said Stephens.

Georgia Senator David Perdue said this week that “Obamacare is failing and that people are losing access to insurance through the exchanges.”

Perdue says if you don’t make sweeping changes now, the issue will get worse.

Stephens though told us they are concerned about “the secrecy and the speed of this process and the speed at which this legislation is now being introduced and voted on.” She says there should be a “healthy” debate and opportunities for experts to really express their opinions and concerns about the legislation.”

We received these statements today from Georgia’s two senators, first from the staff of Senator David Perdue.

“Obamacare is still the law of the land and Senator Perdue is carefully reviewing ways we can try to fix this failing system.”

And from Senator Johnny:

“I am fully and thoroughly reviewing the draft of the Republican health care plan that was released today. The stark reality remains that if we do nothing, Obamacare will fail, and Americans will suffer. We cannot responsibly allow that to happen. As I continue to carefully review this draft plan, I am committed to doing the right thing for Georgia families and all Americans: Deliver insurance that is accessible, affordable and accountable to the American people.” –