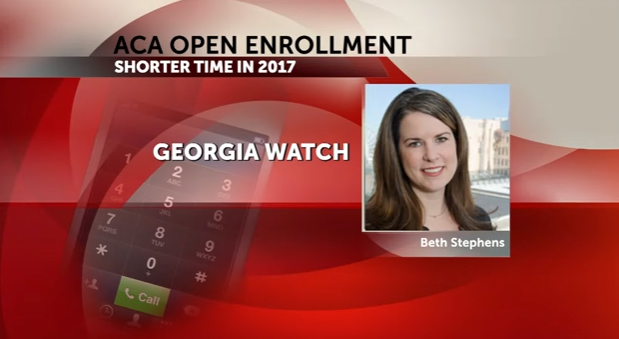 Open enrollment for any individual insurance plan is shorter this year, a lot shorter. The open enrollment period began November 1 and will last only 45 days this year, instead of 100 days. The deadline is December 15.

This affects individuals who may buy an insurance policy by going directly to the company, who may work through an insurance broker or who use the Affordable Care Act healthcare exchange.

In Georgia, about 400,000 people use the exchange to buy insurance and up to 90 percent qualify for a subsidy to help pay for the policy and for help with things like co pays and lowering deductibles. While there is confusion about what the federal government may still be willing to pay, those who need insurance are still encouraged to sign up. “We are just doing the best we can to make people aware of these options that still exist,” said Beth Stephens from Georgia Watch. “And for a lot of people, buying a marketplace plan is their only option.”

Some critics charge that the shorter enrollment period coupled with cuts in advertising the ACA exchanges and cuts in navigators (people who help consumers sign up for insurance on the exchanges) is all an intentional plan by the Trump Administration to make the law implode even more. There’s even word the healthcare.gov website will be shut down for 12 hours most Sundays during the enrollment period. Stephens says that’s unfortunate since many people may use a weekend to study plans, etc.

Again, the shorter enrollment period covers more than those buying on the exchange. Savannah Insurance Broker Bill Lucas says it covers all those who need an individual plan. He believes politics surrounding the ACA may have something to do with less time to sign up. “Every year this has become political on one side or the other,” he said

Lucas says the Affordable Care Act “has helped millions of people but also hurt millions of people.” He says for those who qualified for subsidies for example, it may be a blessing but certainly not for many people (even in the local area) who do not qualify for subsides (because of income and other issues) and who are now seeing rising premiums which they are expected to bear on their own.

He says Blue Cross for example pulled out of Chatham County because of higher claims from people using more healthcare services. That leaves just one provider in Chatham County. Lucas advises people who need advice to seek it from a professional. He says “every day things are changing on the ACA exchange but even with rules regarding other plans for individuals.”