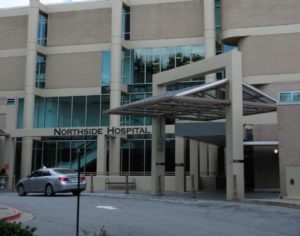 The case involves the nonprofit hospital’s rejection of requests for information about its financial documents and other matters. Central to the case is the legal definition of “public” versus “private.”

The Georgia Open Records Act, known as a “sunshine law,” was created to let the people of the state know what government agencies are doing. Ordinary citizens, lawyers and reporters routinely use the act to find out how agencies make decisions and spend money.

Northside has said it is not bound by the open records law. The hospital says that because it’s a private nonprofit corporation, not a public entity, this particular law does not apply to it.

Media organizations and others argue that Northside is subject to the open records law because it was created by a public hospital authority, which is indisputably a government entity, and that it operates solely on the authority’s behalf. They say all of Northside’s assets belong to its authority.

A spokesman for Northside declined comment on the court decision Monday.

The consumer group Georgia Watch, which submitted a legal brief that supported Smith’s petition, said it was pleased by the decision.

“Georgia Watch has relied on this access to hospital records to report on the financial practices and charity care policies of public nonprofit hospitals in our state,’’ said Beth Stephens, senior director of public policy for the group. “This decision matters not just in the hospital space, but in other situations where private entities have contracts to carry out the duties of public agencies.”

The legal fight has major implications for the Georgia hospital industry, because Northside’s corporate structure is like many others in the state.

These restructured hospitals include large urban facilities such as Grady in Atlanta, along with medical centers in Savannah, Augusta, Macon, Rome and Albany, as well as in the Atlanta suburbs.

Northside’s restructuring occurred in the early 1990s. It’s now a very successful hospital system, with more than $2 billion in revenues, and is set to add Gwinnett Medical Center, a large suburban system, to its fold. Northside has said for years that its flagship Atlanta hospital delivers more babies than any other community hospital in the nation.

The fight over Northside’s records and hospital privacy began in 2013, when attorney Smith requested information about Northside’s expenditures in the acquisitions of physicians’ practices. The AJC in 2013 reported about patients who faced higher bills after the acquisition of two of these practices.

The hospital turned down the request. The plaintiff, a partner of the firm Jones Day, filed suit, and the case was first heard in Fulton County Superior Court.

Last year, the judge ruled in favor of Northside, saying that the hospital authority had nothing to do with the operations and acquisitions of the hospital.

Smith appealed. The court of appeals, in a split decision, upheld the lower court ruling.

Northside spokesman Lee Echols told GHN in July, “We understand and appreciate the interest in open records requests.’’ But he added, “By law, we’re not a public entity that’s subject to” the Open Records Act.

The Georgia Press Association, the First Amendment Foundation, the Savannah Morning News and the AJC, among others, filed amicus briefs supporting the Smith appeal.

The state Supreme Court has set oral arguments in the case for April.