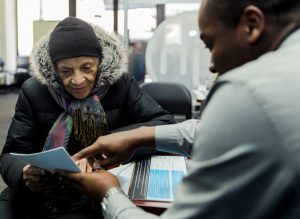 Edith Gyamfi getting tax advice from Tyrone Oliphant at a Jackson Hewitt branch in the Bronx on Tuesday. Credit Sasha Maslov for The New York Times

Fast, free money. That’s what H&R Block, the nation’s largest tax-preparation chain, is advertising on giant banners outside its storefronts and in TV commercials featuring Jon Hamm of “Mad Men”: “You could get a refund advance of up to $1,250.” It is the first time in six years that the company has offered to front customers some money from their anticipated refund.

The nation’s big tax-preparation companies are so desperate for customers that they are willing to put money up front — with absolutely no hidden fees or interest charges, and no ironclad guarantees that the companies will get paid back. H&R Block, for one, has arranged a $1.65 billion funding line for its refund advances, giving pause to some of the Wall Street analysts who follow the company.

Two dynamics are harming H&R Block and its competitors. One is the widespread availability of cheap (and even free) online tax-filing alternatives.

The other is a series of regulatory moves that clamped down on so-called refund anticipation loans, or RALs as bankers call them, which the companies formerly relied on to lure in people who needed cash. The loans typically came with high interest rates and fees, which customers paid on top of the money charged for tax preparation. By 2012, such loans had become nearly extinct after a regulatory crackdown that forced most major banks out of the market. Consumer advocates, who had seen the loans as predatory, were thrilled.

The same advocates are looking warily at the resurrection of this type of loan. The new generation of refund advances are really, truly, no-hidden-fine-print free, though the tax preparers may use them to cross-sell other services. Customers who qualify will be advanced a portion of their tax refund within a day or so, with no fees or interest, though they will still need to pay for the provider’s tax preparation services, which can cost hundreds of dollars.

Struggling tax companies acknowledge that they are using the loans as a come-on to make up for the loss of walk-in traffic and people who have migrated to TurboTax and its alternatives. Each loan will cost H&R Block an average of $32 to $36, according to regulatory filings — which the company will chalk up as a customer-acquisition expense.

“The early part of the tax season is really driven by consumers who need their refund to live,” said David Prokupek, the chief executive of Jackson Hewitt. “Our goal is to help them get fast access to their money, at no cost. This has some risk for us, but we needed to do something in the stores that you can’t get online.”

The loan offers are open to all customers, but they are particularly aimed at low-income Americans who live paycheck to paycheck and rely on their tax refund as their biggest annual cash infusion. For many people, it is a critical way to pay off holiday debt, catch up on overdue bills or cover emergency expenses like car repairs.

Those taxpayers typically file their returns as early as possible. This year, tax filing season starts on Jan. 23 and runs through April 18.

But millions of people will not be able to collect their refund until late February because of a new federal rule that delays refunds for filers claiming certain tax credits.

“We think that’s going to cause real pain,” said Brad Hanson, president of MetaBank, the lender that is funding H&R Block’s and Jackson Hewitt’s loans. “We’re looking to bridge that gap, in a responsible way.”

Refund loans used to carry a notoriously high price tag. In 2002, at the product’s peak, nearly 13 million customers paid more than $1 billion in fees for refund loans, according to data compiled by the National Consumer Law Center.

Pressed by consumer advocates, regulators clamped down. In late 2010, the Office of the Comptroller of the Currency ordered H&R Block’s lender, HSBC, to quit making refund loans. Soon after, the loans effectively died.

For tax preparation companies, the hit was devastating. On top of the lost income from those lucrative fees, they found that without the offer of refund advances, many customers stopped coming in at all.

But a few years ago, Jackson Hewitt figured out how to offer refund loans in a way that would pass regulatory muster: It paid all the fees itself.

“The industry has fundamentally changed,” said Mr. Prokupek, who joined Jackson Hewitt in 2014, three years after the company took a trip through bankruptcy court. “The way I put it was: The girl’s not coming back.”

A tax refund is a commodity, he concluded, and to stand out from the crowd, Jackson Hewitt, which has 3,000 of its 6,000 stores within Walmart stores, would need to offer things the competition did not — like refund advances. To make it work, he came up with a wholly new approach: Treat the loans as a marketing expense.

Jackson Hewitt began offering these advances three years ago and was successful enough that a major rival, Liberty Tax, copied its model the next year. H&R Block announced its program in October.

Analysts estimate that around one million customers took out refund loans last year. This year, H&R Block alone may double that volume.

“We are looking to do a lot of loans to a lot of people, and we will be marketing this aggressively,” Bill Cobb, H&R Block’s chief executive, told analysts on a call.

The company has promised not to pass the cost on in any way to customers taking advances. Some investors are not thrilled about that math: A Morgan Stanley analyst recently downgraded H&R Block, writing skeptically in a research note that the loans “may be a drag to margins.”

Of course, tax companies have found other ways to skim off customers’ money with add-on products. Many low-income customers lack the cash to pay tax preparation fees up front. Instead, they essentially finance them with a “refund transfer.” For a fee — at H&R Block, it is $35 — the company will set up a temporary bank account to collect a customer’s refund, and wait until it arrives to deduct their fee. H&R Block collected $165 million last year from those transfers.

The company also heavily promotes its Emerald Card, a reloadable prepaid debit card on which customers are encouraged to store their refunds. For some customers, H&R Block offers a credit line of up to $1,000 on those cards — for a $45 annual fee, at a 36 percent annual interest rate.

Qualifying for a refund advance does not involve a credit check, and the advance will not show up on customers’ credit reports. If a customer’s refund is smaller than the amount that has been advanced, or is garnished by the Internal Revenue Service, the lender will be required to write the loan balance off as a loss.

“In those cases, we do not attempt to collect, in any way,” said Greg Steinlicht, H&R Block’s vice president for financial services.

H&R Block declined to comment on what percentage of applicants it expected to be approved. Jackson Hewitt said its approval rate was running around 80 percent. The company started prequalifying customers in November; so far, more than 450,000 people have been approved.

Consumer advocates are keeping a wary watch on this new incarnation of refund loans.

The new loans appear to be “very different from the bad, old refund loans of 10 years ago,” said Chi Chi Wu, a lawyer with the National Consumer Law Center.

But customers will need to be on guard against tacked-on fees for extra products, and they may end up spending more than necessary to have their taxes done by a preparer offering refund loans. Tax preparation prices are frequently opaque, and wildly variable.

A “mystery shopper” study done last year by Georgia Watch, a consumer advocacy group, found that the prices quoted to prepare a return for a low-income single mother at local stores, including both independent shops and chains, ranged from $125 to $457.

“Only one office even had prices disclosed publicly, and often, the fees seemed to be completely arbitrary,” said Liz Coyle, Georgia Watch’s executive director. “It’s almost impossible for someone to comparison-shop.”

And for those who need money fast, refund loans are powerful draws.

“This is an effort to arrest our client loss, to bring more people to our office,” said Mr. Steinlicht of H&R Block. “The product went away for several years, but the client demand for it never did.”