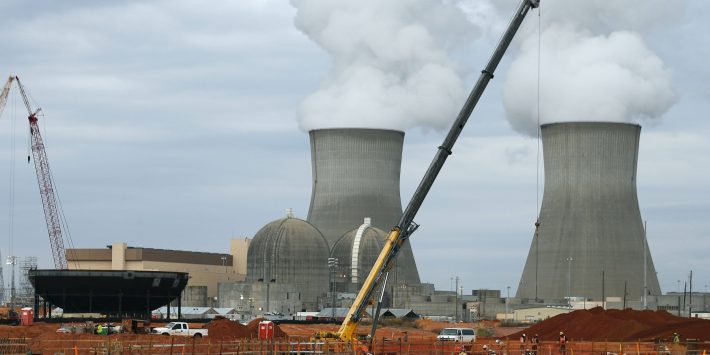 The Georgia Public Service Commission heard four days of testimony this week on Plant Vogtle, which critics say is too expensive.

Construction on two nuclear reactors at Plant Vogtle is running five years behind schedule, and the total cost has doubled to more than $22 billion. The timeline and cost were already growing before the lead contractor on the project, Westinghouse, went bankrupt earlier this year. Now, Georgia Power, which is the biggest owner of the plant, is pushing to keep the project going.

Georgia Power did look at other options, including canceling the project completely or converting it to natural gas. Chiock said that completing the two reactors came out as the best choice.

The utility’s customers are paying now for financing. Once the reactors are finished, ratepayers will pay for capital costs, too.

Georgia Power is asking the Georgia Public Service Commission to sign off on its new cost and schedule. Without a decision from the PSC deeming the new projections “reasonable,” Georgia Power says it and the co-owners of the plant will not go through with their plans.

One point of contention is the lack of control on spending. As long as the PSC judges Georgia Power’s spending to have been prudent, the utility’s customers will pay for the capital costs.

“Is there a cap on what you’re asking this commission to approve?” Liz Coyle, executive director of Georgia Watch, asked Georgia Power comptroller David Poroch during cross-examination.

“There is not,” Poroch said.

Georgia Power has spent about $5 billion on the two nuclear reactors so far. Even if the project is canceled, customers could pay for those capital costs. And Georgia Power could also write the $5 billion off in its taxes.

The next round of hearings is in December. The Public Service Commission will decide whether or not to keep Vogtle construction going in February.