Vogtle’s future hangs on clash of politics and economics

Vogtle’s future hangs on clash of politics and economics 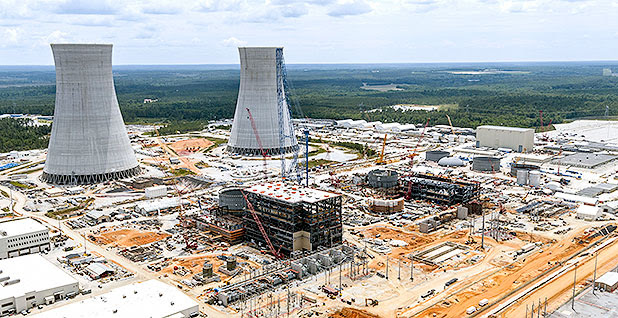 ATLANTA — Georgia utility regulators floated ideas that could end up part of a deal with Georgia Power to complete its nuclear expansion project.

Georgia Power and the state Public Service Commission want to see the project through. But with the electric company’s share of the costs topping $12 billion, regulators face mounting pressure to ensure electricity customers aren’t stuck with the entire bill.

The idea of walking away from Vogtle seems almost unthinkable to Georgia Power, according to utility officials. Still, the utility is concerned enough about the potential of losing $150 million in tax benefits that it worked with the PSC chairman to make sure regulators will take a vote before the end of the year.

The commission and electric company are caught in a tug of war of politics and economics as that Dec. 21 date approaches. The issue has grown so apparent that PSC Vice Chairman Tim Echols offered up this question in the middle of a hearing yesterday: “Are ratepayers better off having the power company step up and say, ‘We’re not going to do this anymore,’ than if the five of us canceled the project out front?” he asked.

Vogtle is the only nuclear project under construction in the United States. Its future has been hanging in the balance since late March when its contractor, Westinghouse Electric Co. LLC, filed for bankruptcy protection. The twin reactors were already years behind schedule and billions of dollars above their forecast budget when that happened. Now the price tag is roughly $23 billion. Georgia Power’s share is at $12.2 billion.

The electric company wants assurances from the PSC that it can bill customers for all of the project’s increased costs. If that doesn’t happen, any of the public power companies can pull out of the project, and it will fail.

The PSC staff has challenged Vogtle’s economics. Even with guaranteed payments coming from Westinghouse’s parent, Toshiba Corp., which cut the Georgia Power’s projected costs to $10.5 billion, that is too much for customers to pay, the PSC staff argues.

A so-called break-even amount is roughly $9 billion, the PSC staff recommends. This means Georgia Power and its parent, Southern Co., would have to absorb some of Vogtle’s costs.

If the PSC doesn’t tell the company to do that, then the PSC staff argues the project should be canceled. The PSC staff and consultants explained their figures yesterday as part of ongoing hearings about Vogtle’s new cost and schedule.

“The heavy lifting that you all have done with these numbers are helpful,” said Echols. “I appreciate all of the work you’ve done on that.”

A previous settlement cut Georgia Power’s return on equity (ROE) from Vogtle to 10 percent. That amount will be lowered to 7 percent if the reactors are not producing electricity by 2020.

The company’s new schedule for Vogtle would put the reactors on the grid no earlier than 2022 and 2023.

In sharply worded testimony filed with regulators, PSC staff analysts and consultants said even with that return-on-equity cut, the company’s profits would increase by $5 billion over the life of Vogtle because of its delays.

Liz Coyle, executive director of the consumer group Georgia Watch, asked whether, if Georgia Power’s return on equity were cut even further, it still would continue to profit more than it would had the reactors been finished on time. Both units were supposed to be producing electricity by now.

“The commission has the authority to do that; I want to make sure the math is correct,” she said.

Echols pressed the issue even further.

“You’re saying as a negotiating measure, we could go back and reduce the ROE on the initial [capital costs] that have been collected,” he said.

The chairman of the PSC, Stan Wise, told E&E News on Monday that the commission’s decision on Vogtle next week does not seal the project’s fate. “Either they’ll accept it, or they’ll reject it,” he said. “We’re not going to vote to abandon the project. As far as I’m concerned, only they will do that.”

Stakeholders spent a large part of yesterday asking about the amount Georgia Power would receive in tax benefits if it canceled the project. The utility did not include the incremental income tax effects in its analysis of comparing whether to finish Vogtle, which led to a $1.4 billion discrepancy with the PSC staff’s figures.

Georgia Power would be able to take a $4.7 billion abandonment loss deduction if it canceled Vogtle, Kollen said. The company would have to monetize that loss over roughly three years at about $1.5 billion a year, he said. PSC staff used a 35 percent corporate tax rate to do its analysis. If Congress cuts that to 20 percent starting next year, Georgia Power said, it would lose $150 million in benefits.

Kollen said there’s no way for the PSC staff to confirm those figures.

Kurt Ebersbach, an attorney with the Southern Environmental Law Center, asked how important that amount is when you factor in the rest of Vogtle’s costs.

“While not insignificant, [$150 million] is merely a sliver of the total abandonment loss deduction,” he said.

“It is,” Kollen responded.