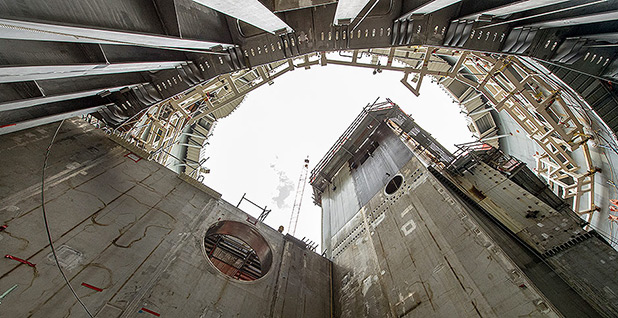 Georgia Power Co. has hired more than a dozen nuclear operators from a now-shuttered nuclear reactor project in South Carolina to work on its own site in Georgia.

The move will save Georgia Power two years of time and money, the company said in its latest update on the Plant Vogtle nuclear expansion project. That Georgia Power is looking to Vogtle’s reactors transitioning to a “testing-and-startup” phase is unusual, given the reactors’ rocky past, but it is one example of the changes that have happened at the construction site since the utility and its sister nuclear company have taken over.

Georgia Power, a unit of Atlanta-based Southern Co., detailed its progress in a routine filing with the Georgia Public Service Commission. The account covers a six-month period that Georgia Power and Southern’s nuclear unit have been in charge at Vogtle. It is also the first review since the Georgia PSC approved the utility’s request to finish the reactors, tacking on some financial conditions.

The PSC has a new chairman as well as a newly appointed commissioner after veteran regulator Stan Wise resigned. The five-member panel will be reviewing the report and upcoming testimony during an election year where campaign contributions are flowing rapidly, and the pressure is on to keep Vogtle moving without any drama.

It’s unclear whether that will happen based on some oddities in the Georgia Legislature.

For now, Vogtle is tracking roughly eight months ahead of schedule. Georgia Power is asking that regulators sign off on $448 million in capital expenses from July through the end of 2017.

The utility continues to tout jobs and economic development as well as fuel diversity as a reason to finish the reactors. Vogtle also will put emission-free baseload generation on the grid for decades.

Georgia Power defends its additional reason — to hedge any potential cost of carbon — by saying federal energy policy and regulations are in a “continual state of change.”

The reason that Vogtle’s supporters, which include the PSC, are hoping the project enters somewhat of a quiet period is that the past year has been anything but. The electric companies and regulators have had to navigate the project through an uncertain year that started with Vogtle’s main contractor, Westinghouse Electric Co. LLC, going bankrupt.

Georgia Power and Scana Corp.’s South Carolina Electric & Gas Co. stepped in to keep their reactor projects going. Once they started reviewing Westinghouse’s project information, it was clear that each project was even further behind schedule, which meant it would take even more money to finish them.

The South Carolina utilities decided to walk away from their project, saying the costs were too much for customers to pay for. Georgia Power and the group of municipalities and electric cooperatives that are co-owners wanted to keep going.

Vogtle is now roughly twice its original $14 billion schedule, and Georgia Power owns 45.7 percent of that. A $3.7 billion payment from Westinghouse’s parent, Toshiba Corp., has lowered that cost. Loan guarantees — including a new conditional one — from the Energy Department and newly extended federal production tax credits also give economic offsets.

It’s that which worries consumer advocates such as Georgia Watch, which actively participates in Vogtle’s hearings at the PSC.

“How many times before have we been assured at the beginning of a new project manager, ‘Oh, now we’re staying on schedule or ahead of schedule’?” asked Liz Coyle, Georgia Watch’s executive director. “What we’re seeing in this filing is the window dressing that the company wants you to see.”

Indeed, details will come later through company testimony and that of the PSC staff and construction monitor.

“To me, this is not what’s in the report, I look at what’s not in the report. What are we not seeing here,” Coyle said.

Much of Georgia Power’s previous filings have included frustrations with Westinghouse and its subcontractors. The PSC staff’s testimony raised additional questions about Westinghouse’s ability to finish the reactors on time when it wasn’t meeting key construction milestones.

“Now [Georgia Power and Southern Nuclear] doesn’t have anybody to point fingers at but themselves,” she said.

Vogtle is the lone nuclear project under construction in the United States. It is using Westinghouse’s AP1000 reactor design. The same technology is being used at reactors in China, but those reactors are also behind schedule.

Fuel loading has been suspended at the Sanmen nuclear power plant. Details are sketchy.

“Fuel load has not been further delayed due to safety or security concerns,” Westinghouse spokeswoman Sarah Cassella said. “This regulatory rigor has confirmed that there are no issues for the first-of-a-kind technology, as the AP1000 plant at Sanmen is.”

Georgia Power spokesman Jacob Hawkins said the electric company has been monitoring the Sanmen project for years and has no reason to believe that Vogtle will have similar delays prior to loading fuel.

Georgia Watch and others continue to push back at the PSC’s December actions. The group lost its argument to have the PSC reconsider that vote, saying the agency had approved new financial requirements without knowing the full impact on the company and its customers.

Georgia Interfaith Power & Light and the Partnership for Southern Equity have appealed the PSC’s decision in Fulton County Superior Court in Georgia.

The Georgia Senate recently approved a measure that sunsets a controversial law that let Georgia Power bill customers for Vogtle’s financing costs. The utility did not testify at any committee meetings, and a company spokesman said the legislation is unnecessary, a signal that there’s little appetite to build baseload nuclear generation after Vogtle.

But Dalton Utilities, the smallest partner in the Vogtle project, has been actively pushing for a bill that would let the city sell bonds without a public vote. Company executives said it’s a move they’ve wanted to make for years and that they can cover Vogtle’s expenses; they just want the “flexibility” in the future.

The bill, which ran into extreme opposition and skepticism from lawmakers, did not pass the House chamber by a required deadline. Consumer advocates are watching to see whether the measure gets tacked on to another bill before the session wraps later this month.

Media reports say the measure has support from Georgia’s governor and the other utilities building Vogtle. A Georgia Power spokesman independently confirmed that the company supports the bill because it would benefit Vogtle’s other utility partners.

Oglethorpe Power Corp. and the Municipal Electric Authority of Georgia did not answer E&E News’ inquiries and said they had nothing to add.