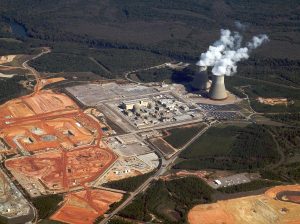 In this 2011 photo, construction was underway on two AP1000 nuclear reactors at Plant Vogtle near Waynesboro, Georgia. With the project only about 36 percent complete, lead contractor Westinghouse has declared bankruptcy, leaving the future of that project and another in South Carolina in question. (Photo by Charles C. Watson Jr. via Wikipedia.)

Clean energy and consumer watchdog groups were outspoken in opposition to the projects, which involved a new type of reactor known as the AP1000. The Southern Alliance for Clean Energy (SACE) testified extensively with expert witnesses before the Georgia Public Service Commission to warn about the high risks of investing in expensive new nuclear power and to encourage turning instead to clean, affordable alternatives like energy efficiency, and SCE&G ratepayers intervened to try to block construction in South Carolina.

But in 2009, federal and state regulators approved two AP1000 reactors for each of the sites. While the Obama administration offered $8.3 billion in taxpayer-backed loan guarantees to help finance the construction of the Vogtle reactors, the Georgia legislature passed a law allowing Southern Company to finance them through a scheme called “construction work in progress” that forces ratepayers to pay in advance, with a charge of about $10 on the average customer’s monthly bill. South Carolina also has a law in place allowing prepayment; as a consequence SCE&G customers have faced nine rate hikes since 2009 driven in large part by the project.

Construction got underway at the two sites — but then came the predicted delays and cost overruns. With the first new reactors initially set to come online this year, the Vogtle project is only about 36 percent complete, and construction at Summer is only about one-third complete. And while state regulators have approved costs of around $14 billion for each project, Morgan Stanley has estimated the final bill at about $19 billion for the Georgia reactors and $22 billion for the South Carolina project. Ratepayers in Georgia have already forked over about $3.9 billion for the reactors, while those in South Carolina have paid about $4.5 billion. Meanwhile, the utilities are guaranteed a 10 percent return in profits, even in the case of cost overruns.

Now this week Westinghouse — the Pittsburgh-based division of Japanese tech conglomerate Toshiba and the reactors’ main contractor — cited those massive cost overruns in declaring bankruptcy. The move leaves the projects in limbo and utility customers in Georgia and South Carolina facing one of two unpleasant scenarios: paying billions for nothing, or continuing to pay even more for reactors whose completion remains uncertain.

Critics are reminding regulators that they should have seen this coming.

“Time and time again, our legitimate concerns and consumer-protecting recommendations were ignored,” said SACE Director Dr. Stephen Smith. “Now there is a lot of wringing of hands and surprise by those with the power to protect utility customers claiming that no one could have predicted this. The reality is, they shouldn’t have ignored the predictions they were presented over and over again, and they should not ignore the predictions now.”

‘No option that doesn’t affect rates’

At the time the projects were first proposed, worried consumer advocates pointed to the nuclear power debacle of the 1970s and 1980s, when utilities nationwide canceled about 100 planned reactors due to cost overruns. In the end, ratepayers and taxpayers shelled out about $40 billion for those abandoned projects — over $200 billion in today’s dollars. Forbes magazine called it “the largest managerial disaster in business history, a disaster on a monumental scale.”

What will happen next in Georgia and South Carolina remains uncertain. On a conference call this week, SCANA told investors that 5,000 workers would continue working on the Summer site for 30 days while the company considered its options. SCANA CEO Kevin Marsh said the company’s “preferred option” is to finish the reactors while its “least preferred option is abandonment.” Meanwhile, Georgia Power said it is looking at “every option.”

During a SACE conference call this week about the implications of the Westinghouse bankruptcy, Peter Bradford, a former member of U.S. Nuclear Regulatory Commission and adjunct professor at Vermont Law School, said Georgia and South Carolina utility customers should expect another rate hike if the reactors eventually go into service — or if they are abandoned.

Liz Coyle, executive director of the consumer advocacy group Georgia Watch, pointed out on the call that the costs ratepayers are being forced to bear for the unfinished reactors present a “tremendous burden” for low-income households — one that is unlikely to ease any time soon.

“We see no option ahead that doesn’t affect rates customers will be paying,” she said.

Smith, Coyle and others are calling on utility regulators in Georgia and South Carolina to conduct a careful, transparent analysis of what’s in the best interest of ratepayers and proceed accordingly — and to remain unswayed by corporate interests that want to press ahead at any cost. If the companies and regulators do decide to proceed with construction, Smith said, ratepayers’ financial exposure should be capped.

Smith is also urging regulators to ground all future decisions in a basic concept of fairness: that no utility customer should be forced to pay for any facility for which a company cannot offer a reliable price estimate and timetable.

“If companies choose to build electric generation facilities with unknown costs and schedules, they should have shareholders carry the risk,” Smith said. “We must call on regulators to do their job and look out for customers’ interests.”